❌ Sassuolo shipped 4 Napoli goals in an hour – all were canceled due to offside positions. Thanks to VAR: don’t find fault with anything – have you seen that? – Blogs

Gattuso compared the opponent to Barcelona.

Only a couple of rounds until the end of the Serie A season. Three rounds before the finish, Sassuolo went to Naples in order to impose on Gennaro Gattuso’s team a fight for seventh place – a gap of 8 points left mathematical chances for an interesting outcome in the last rounds.

It turned out not so interesting: “Napoli” confidently won 2: 0. The main fact about the match: Sassuolo scored 4 goals, but none of them were counted.

32nd minute. Filip Djuricic breaks out to the goal and sends the ball into the near corner. The linesman raises the flag, the GAR confirms his decision – offside.

37th minute. Djuricic sends the ball into the goal for the second time. This time, Hamed Traore got into a small offside position – it was he who struck, after which Philip finished off.

50th minute. Francesco Caputo scores 20th goal of the season. Or not? VAR found an offside position in the early stages of the attack with Domenico Berardi. Here it is clearly offensive:

61 minutes. The opposite situation: Domenico Berardi punches David Ospina. But before that, Caputo got out of the game. In the dynamics of the broadcast it was difficult to see, but the attacker on the body is closer to the goal.

All the pain of the world is in the eyes of Sassuolo coach Roberto De Zerbi.

The disappointment is easy to understand: Sassuolo are one of the best Serie A teams since the restart. Before Napoli, they lost only to Atalanta and Milan (which are simply the best), beat Lazio in Rome, played 3: 3 with Inter and Juventus.

And now a few words about Napoli:

• Gennaro Gattuso’s squad has already secured a place in the Europa League for next season – thanks to winning the Italian Cup;

• The first goal of the match was scored by Elseid Husai (already in the eighth minute). And this is a truly historic event. First, this is the Albanian’s debut goal for Napoli (after 5 years and 193 matches).

Secondly, this is the first goal for Husai and in Serie A. Among all the current players in the Italian championship, it was Elseid who played the longest without a debut goal – 188 matches. 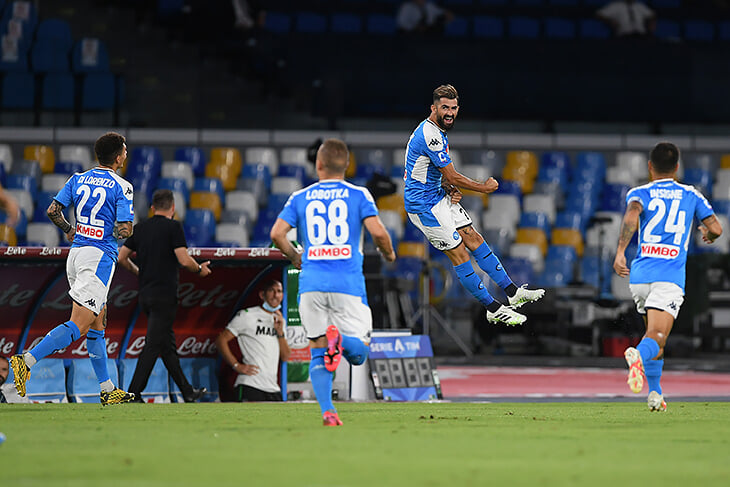 The last time the Albanian defender scored was back in Serie B for Empoli Maurizio Sarri – in 2014. Then Husai dribbled across the front and shot from the goalkeeper into the far top corner. Now Elseid has nailed Sassuolo with a powerful blow from outside the penalty area.

On the third added minute, Allan shot beautifully and set the score 2: 0.

• Napoli described the match against Sassuolo as a good rehearsal for playing against Barcelona in the Champions League.

“It was a worthy test: Sassuolo is playing in a style similar to Barcelona. The teams have a similar philosophy, – Gattuso poured compliments after the game. – We played right against Sassuolo, but Barça have Leo Messi, who gets the ball, passes ten and passes between seven more opponents. But we will go to Camp Nou and play our football. “

We think Gennaro should be on the alert: the Catalans do not fall into an offside position as often as the Sassuolo players.

The return match between Napoli and Barça in the Champions League will take place on 8 August. The first one ended with a score of 1: 1.