It lasted over a year.

2. Alexey Sutormin moved to Rubin one and a half weeks before the start of the season, but after seven days he ended up at Zenit. It turned out that “Rubin” paid “Orenburg” 50 thousand rubles for Sutormin (possibly Zenit too, but journalist Vasily Konov promised not to show the documents).

3. Alexander Gatskan left Rostov 11 years later and moved to Wings of the Soviets.

4. The RPL introduced the VAR. In the first part of the season, the system did not work in all matches, in the second it was supposed to be everywhere (but the pandemic broke plans). Most of all VAR liked “Spartak” and personally its owner Leonid Fedun.

5. Record transfer of the season – Malcolm, who moved from Barcelona to Zenit for 40 million euros. The Brazilian came out twice in the summer, broke down and recovered only by January…

6. Krasnodar heard the Champions League anthem at their stadium for the first time, having passed Porto in the third qualifying round (0: 1, 3: 2). True, Murad Musaev’s team did not reach the group – two defeats from Olympiacos (0: 4, 1: 2). 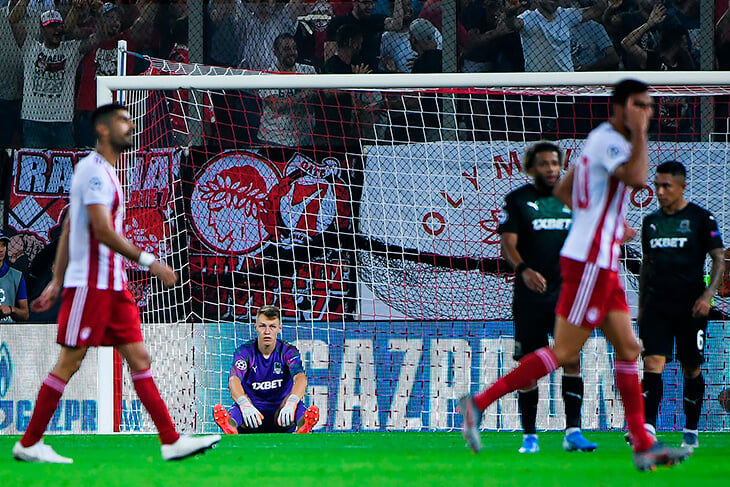 8. Rubin with a young coach Roman Sharonov scored 7 points in three rounds and charmed with a combination game. After that there was a series of defeats, “We accept this defeat and move on” and Sharonov’s admission that locker room conversations should not have gone public…

9. Vladimir Bystrov compared Krasnodar striker Markus Berg to a tree, posting a photo of a pine tree on Instagram. The story continued – Krasnodar congratulated Berg when the Swede beat Bystrov in goals for the club, and in March Vladimir chose Markus as the best player in the match against Ufa. As a result, Berg became Krasnodar’s top scorer in the RPL (9 goals).

10. Again about Malcolm – in the August match with Dynamo, the Brazilian accidentally hit the referee Evgeny Turbin with the ball. The judge’s reaction is super.

11. Head coach of Ufa Vadim Evseev is one of the main trendsetters of the season. In September, Yevseev took the ball with his butt, in November he asked if they play football for goals, in June he spoke about his opinion, which he strongly disagrees with, and in July he thwarted Ural’s counter-attack, jumping out to the border of the technical zone and preventing El-Kabir … There were also serious moments – for example, interview Sports.ru…

12. The head coach of Spartak Oleg Kononov resigned after the 11th round – by that time the Muscovites had lost four matches in a row in the RPL and did not qualify for the Europa League group.

13. The next retirement in the RPL happened at Dynamo – Dmitry Khokhlov was replaced by the youth coach Kirill Novikov. The new coach got rid of striker Ramil Sheydaev and stabilized the squad (thanks to Roman Oreshchuk for the quality selection) – Dynamo took 6th place.

14. Head coach of Tambov Alexander Grigoryan gave a serious interview to Sports.ru, but I remember my comment after the game with CSKA: “I will not revise this shit.” After the 13th round, Grigoryan resigned – Tambov was the last.

15. The Russian national team went directly to Euro 2020, finishing second in the qualifying group. Due to the pandemic, the tournament was postponed to 2021 – however, the name may not be changed. 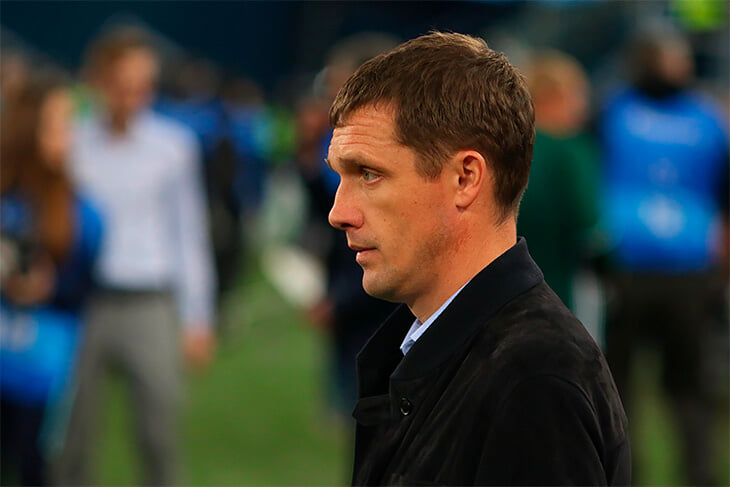 17. The December match “Sochi” – “Orenburg” was postponed to March due to a massive sore throat at Sochi. A few days later the head coach of Orenburg Vladimir Fedotov moved to Sochi.

18. During all matches of the 19th round fans left the stands in protest against the mass arrests of Spartak fans before the away game against Zenit.

19. All Russian clubs did not qualify for the European Spring: Zenit and Lokomotiv finished fourth in the Champions League groups, Krasnodar came third, and CSKA finished last in the Europa League groups. 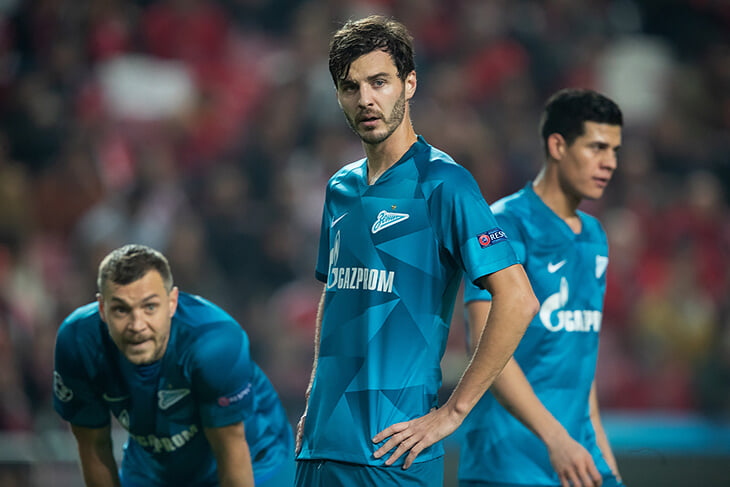 20. Head of the Department of Judging and Inspection Alexander Yegorov resigned after numerous scandals in the first part of the season. CSKA President Evgeny Giner commented on Yegorov’s work brightest of all: “We will not be able to raise the Russian championship and will not play at the European and World Championships until Mr. Yegorov resigns. Better not to quit, but to shoot himself. Such people should be imprisoned, because I am sure that he takes money for our arbitrators to judge that way. I am ready to answer for my words. ” Viktor Kashshai was appointed to replace Yegorov, and Ashot Khachaturyants became the new head of the referee committee.

22. Alexander Kokorin, after leaving prison, signed a one-year contract with Zenit, but he never played for Peter – in the winter he had to go on loan to Sochi (due to completely non-football reasons), although the attacker really did not want to. With Pavel Mamaev, everything is calmer – he plays and scores for Rostov.

23. RPL President Sergei Pryadkin in January was re-elected ahead of schedule for five years. The RFU recognized the elections as illegitimate, new elections were called, at which Pryadkin was unanimously re-elected. 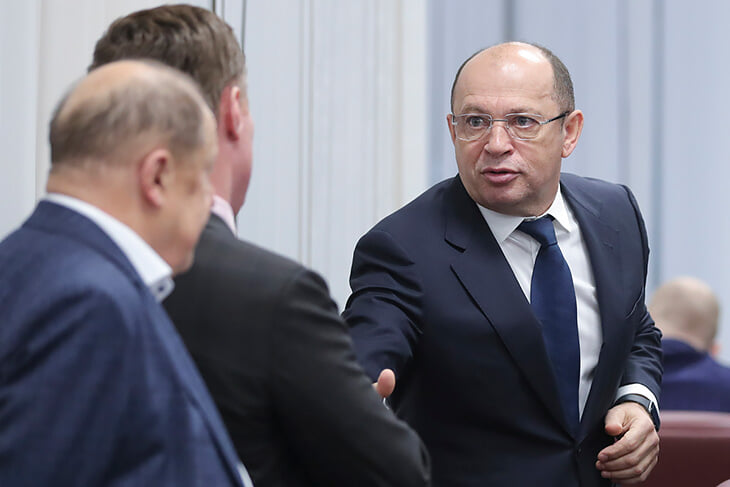 24. Krasnodar parted ways with the first graduate of the club, who was entrenched in the base – Ivan Ignatiev. The 21-year-old striker moved to Rubin, for which he scored for the first time from the penalty spot in the 30th round.

25. Alexander Sobolev, the second scorer of the first part of the season together with Eldor Shomurodov, in January moved from Krylia Sovetov to Spartak on loan. In May, Muscovites bought Sobolev out.

26. Viktor Goncharenko did not shake hands with Domenico Tedesco, who was running towards him, after the quarterfinals of the Russian Cup (in which CSKA lost to Spartak 2: 3).

27. Domenico Tedesco became the first coach in RPL history, disqualified for busting yellow cards… After serving his sentence, Tedesco grabbed a sending-off in a game with Lokomotiv and was disqualified for three games (that is, until the end of the season).

28. At the match “Arsenal” – “Rubin” dedicated a banner to Valentina Tereshkova “Valya, you are just space!” It turned out that his hung out by the members of the team “Youth of the ONF”… 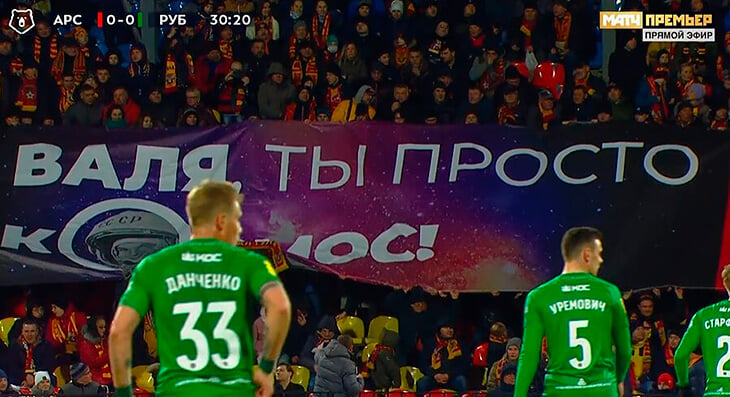 29. Adil Rami, who moved to Sochi in winter, never played for the club. In May, Sochi canceled the Frenchman’s contract and accused him of hiding an injury during the transition, Rami’s representatives said they would contact FIFA and CAS, and Sports.ru presented to the Frenchman new annual Golden Cup of Espresso award.

30. Before the pause due to the coronavirus, the RPL had three world champions – Rami, Shyurrle and Benedict Hevedes. None of them played after the resumption of the championship – Shyurrle ended his career, and Hevedes terminated the contract with Lokomotiv.

31. Sports.ru held a PES cyber tournament among RPL players. Dziuba won in the regular season, but in the super final Artem lost to Nikoloz Kutateladze from Spartak.

32. Krylia Sovetov goalkeeper Yevgeny Frolov gave an interview during a pause in the championship, in which he criticized the Russian government. Krylia announced that they would fine Frolov for violating the clause of the contract, but they probably never punished the goalkeeper. 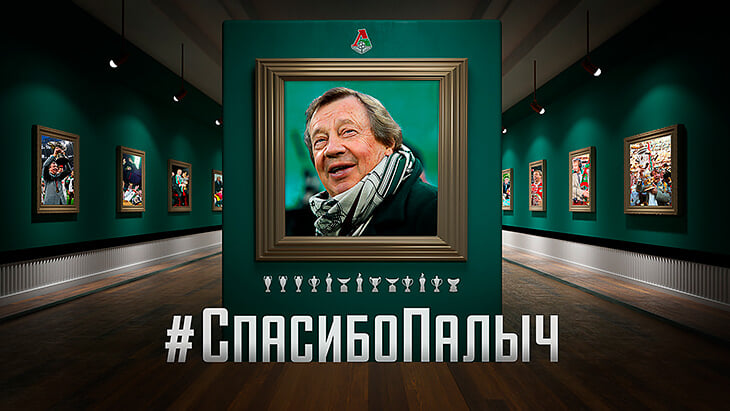 34. Wings of the Soviets defender Alexander Anyukov has completed his playing career. Next season, he should join Sergei Semak’s coaching staff at Zenit.

35. Orenburg changed three coaches during the season. The team started the championship with Vladimir Fedotov, entered the spring with Konstantin Emelyanov, and ended the season with Konstantin Paramonov. By the way, Paramonov’s contract has not been extended – next season Orenburg will have a new coach. 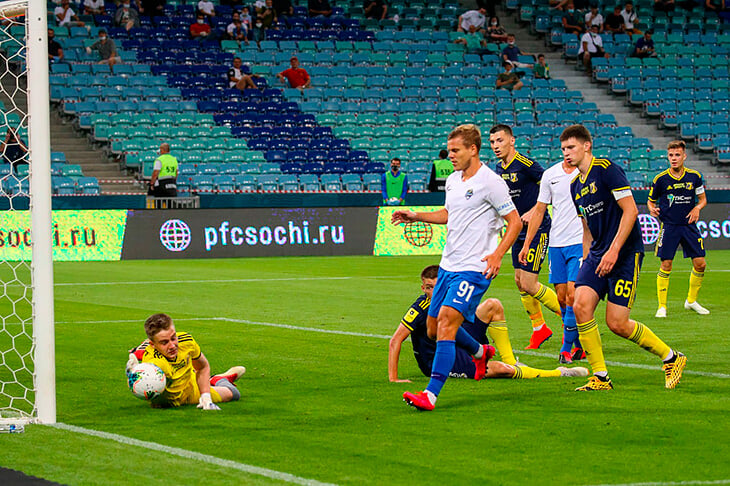 37. Viktor Goncharenko left for Belarus after a crushing defeat to Zenit (0: 4), but CSKA management persuaded the coach to continue working with the team. Goncharenko admitted that he quickly regretted leaving and apologized to the players.

38. Arsenal striker Evgeny Lutsenko broke the RPL record for head goals in a season – 9. Previously, the record belonged to Alexander Bukharov, Seyd Dumbia and Artem Dzyuba, who scored 7 each (Dzyuba did it in two seasons).

39. Midfielders Bernard Berisha (Akhmat) and Khvicha Kvaratskhelia (Rubin) broke the RPL record for the number of successful dribbles per match (both had 11, Khvicha needed one more attempt). Prior to that, the record belonged to the Hulk and Aiden Magkidi, who beat the opponent 10 times per game (Magkidi did it twice).

40. The head coach of “Rostov” Valery Karpin launched a war on the leadership of the RPL. After the match with Orenburg, Karpin quoted “there is no limit to human abomination” Anatoly Byshovets. Pryadkin wrote a letter to the RFU Ethics Committee – according to the president of the league, Karpin dealt a blow to the RPL’s business reputation. In response, Karpin posted a photo of the letter on Instagram and wrote “It turns out that we have an RPL president who cares about the image.” 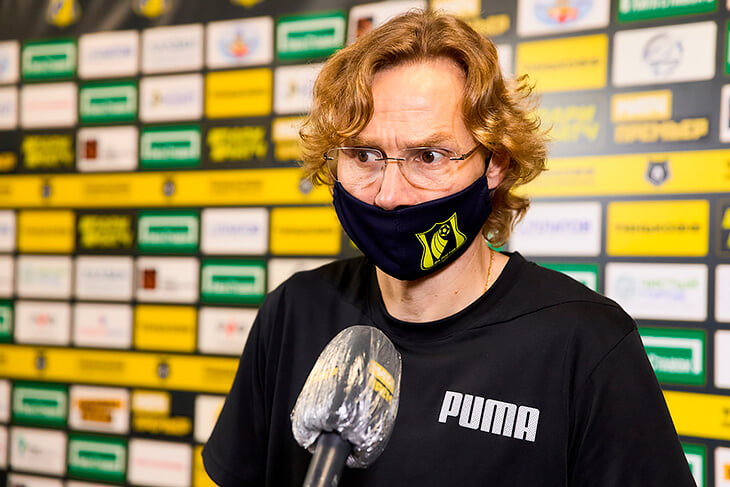 41. The general director of Lokomotiv Vasily Kiknadze showed the fact to the fans of the club – while the media did not see the gesture, and Kiknadze confessed everything himself.

42. Four technical defeats have been recorded in the RPL this season: Orenburg in the matches against Krasnodar and Ural, as well as Sochi in the games against Tambov and Krylya Sovetov. All – because of the coronavirus and the inability to play the basis.

43. General Director of Ufa Shamil Gazizov left the club and moved to a similar position at Spartak. 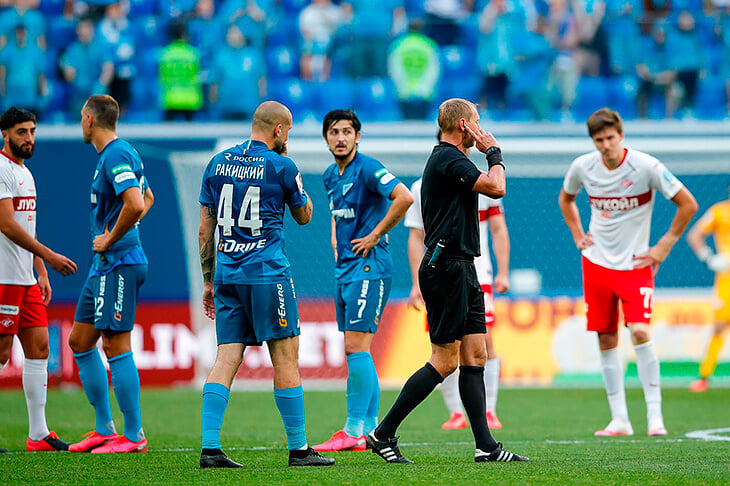 45. Georgy Melkadze scored the first goals in the RPL – the Tambov midfielder has 7 goals.

47. Zenit defended the championship title for the second time in history. This happened for the first time in the 2011/12 season under the leadership of Luciano Spalletti. Both times the team was Sergey Semak.

48. Artem Dzyuba is the first player in RPL history to become the league’s best assistant for two seasons in a row (13 assists). 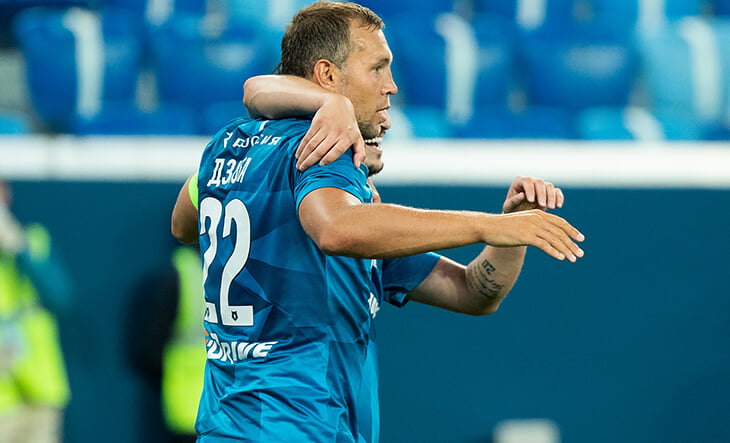 49. Artem Dziuba and Serdar Azmun became the most productive pair of strikers in RPL history (34 goals) and arranged the brightest celebration of the championship…

50. Tambov did not play a single match in Tambov.