Absurdity: dozens of fake channels of Simple are still not in the bathhouse on Twitch (but the real one was banned) – Flight to the Sun – Blogs

CS: GO insider Don Haci posted a GIF where he scrolls through Simlpa’s fake Twitch channels. There are dozens of them, and they are still not in the bath.

None of the accounts in this GIF are banned. pic.twitter.com/Ju49XPwoce

The wildness of the situation is that these are channels of scammers. In the name of the stream, viewers are promised the distribution of free skins; on the broadcast itself, the old waters of Simpla are played – but with banners and overlays (for example, online casinos) all over the screen. The bot in the chat throws a link to the very “free distribution”. The user is prompted to log into the Steam account, and it is worth doing this – an offer is instantly sent from your account to scammers. Did not have time to guess and cancel – lost things. 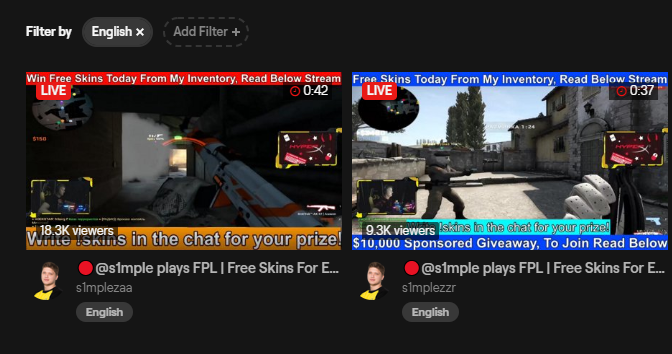 Want even more absurdity? Back in December, Simple himself drew attention to these streams – and asked Twitch to take action.

I see my live fake profiles on twitch scamming people everyday, wtf? Isn’t it your responsibility to protect your own people?

“Every day I see fake profiles using my name on Twitch. They cheat people, what the hell? Isn’t it your responsibility to protect your audience? ” – wrote Simple.

Apparently, then the twitch ignored Sasha’s requests. A few weeks later, GeT_RiGhT tweeted about the fake channel in his name – and also posted one of Simpl’s fakes. He only joked sarcastically.

– Hey Twitch, could you ban this channel?

Two specific channels that GeT_RiGhT indicated were still banned. But already in January, the next fake broadcast of Simpl gained 4 thousand viewers and entered the top twitch. And in February, a similar stream showed 14 thousand. The situation has not changed until now, but on July 29, the real channel Simpl was banned – for the third time. Sasha was not informed about the reason.

“While I’m enjoying the ban, you can enjoy my other streams with ‘great’ giveaways that anyone can ‘easily’ win,” Simple snorted on Twitter.

Of course, most of the thousands of views of these streams are cheating. But real people go there too – and even come across. For example, on the Dota subreddit, there was a story of a guy who really clicked on the fake Notail stream and even entered the steam data via a link in the chat (but quickly came to his senses and managed to cancel the offer).

The most popular names among Dota fake streams are Arteezy, N0tail, Gorgc, iceiceice and Topson. Recently, there are fewer of them, but in any case – be careful.

The best CS: GO posts are with us

Urunov named the best player of Ufa in July