Cadiz will cheer up La Liga: signed by Negredo, the best player is the brother of Nacho from Real Madrid, and the sporting director is the former assistant of Monchi – DribblingArbeloa – Blogs

From the editor: you are on a custom blog Dribbling Arbeloa, the author finds cool stories about Spanish football and regularly gets on the main page. Support with pluses!

Cadiz did not win the Segunda, losing first place to Huesca at the finish, but he was the first among the clubs in the second division to enter La Liga – after 14 years. We will tell you what kind of team it is.

Four years ago I played in Segunda B

After leaving La Liga in 2006, a major reboot began at Cadiz. The club was hanging out between the second and third divisions and was in a management crisis.

In 2018, Cadiz CEO Quique Pina was charged with money laundering and suspended from football activities. The club was saved by President Manolo Vizcaino, who paid off the debts out of his own pocket. When asked why he spent his money, Vizcaino calmly replied: “Look, this is a profitable business. I spent a little today, bought it tomorrow. And so it happened – a ticket to La Liga was achieved. “

In 2013, Oscar Arias came to Monchi’s office in Sevilla, and four years later replaced the sports director, who had gone for a promotion to Roma. But Arias did not succeed: he let the leader of the Vitolo team go to Atlético and miscalculated with the head coach (Eduardo Berizzo).

In 2018, Arias became the sports director of Cadiz. At Ramon de Carranza, he got complete freedom of action and created an excellent team.

Fali Jimenez and Juan Cala have formed a top bunch in the center of defense – Cadiz conceded only 39 goals in a season, this is the third result in Segunda (above only Malaga and Gijón). Forward Choco Lozano could be seen in Girona and Barcelona B, but it was in Alvaro Cervera’s team that he turned into a stable striker – 10 goals, each of which brought points.

Arias also learned to sell. In recent years, thanks to two transfers (Alvaro Garcia to Rayo Vallecano and Manu Vallejo to Valencia), the budget of Cadiz has been replenished by almost 10 million euros.

Among the roster, modest in name, there are circumstellar players. Former Atlético and Argentina midfielder Augusto Fernandez has been pulled out of China for the end of the championship, while Alvaro Negredo (ex-Manchester City and Spain) will be pulled from next season.

Leader – a graduate of Real Madrid and brother of Nacho

You may remember the red-haired Real Madrid academy who made his first team debut under Jose Mourinho. This is the younger brother of Nacho, who, after Espanyol, Elche and Reading, stopped at Cadiz. And now he is the leader of the team.

Alex finished first at Cadiz in goals (13) and second in assists (6, more only by Salvi Sanchez – 8). He is also a favorite of local fans and a vice-captain.

Key advocate refuses to exercise before coronavirus vaccine is invented

The main opponent of the restart of the season in Segunda was the aforementioned Fali Jimenez, a center-back who passed through the Barcelona academy, who refused to go to training before the invention of the coronavirus vaccine. 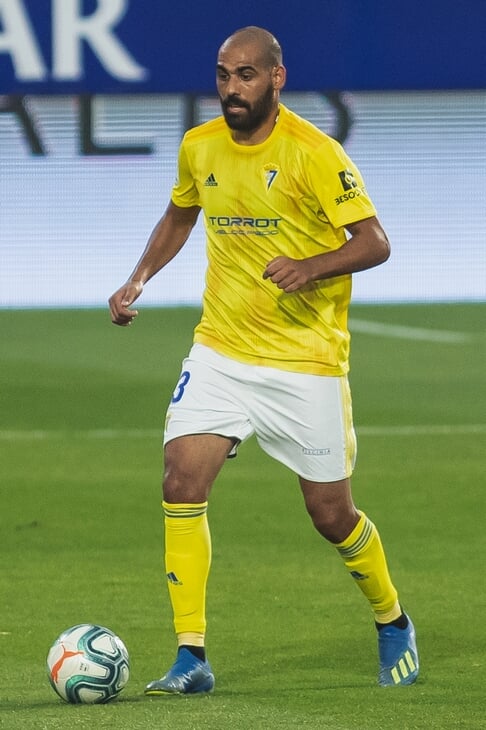 The club gave Jimenez time to recover, after which he passed the necessary tests and returned to the team. True, the defender lost the reinforced concrete place at the base due to poor form. “Without going to a psychologist, I wouldn’t have succeeded. He awakened in me an important sense of altruism and explained responsibility, ”- this is how Jimenez explained the decision to return.

What did he do during the quarantine? Played golf: “I think we would be friends with Bale. Let him go to Cadiz, but he should know that if you don’t run here, you don’t play. He will have to run a lot. “

Attacking midfielder Nano Mesa, who plays at Cadiz on loan from Eibar, celebrated the entry to La Liga brightest. During the interview, his eyes gave off a sparkle, and he himself was actively rubbing his nose.

Mesa was suspected of using cocaine, so he went to the clinic and took a test for drugs in his blood. The test turned out to be negative, the player posted the result on social networks.

“There has been a strange hype in the last couple of hours around my interview with club television,” Nano said. – I suppose I should have answered all doubters. I hope there are no questions now. “

It seems that La Liga will be even more fun with Cadiz.

What will happen to Dota, Gabe? – Esports journalist – Blogs