Next to Wide World of Sports is the same lock from the splash screen.

MLS has already resumed the season at ESPN Wide World of Sports (NBA will do the same soon) – this is the sports complex of the Disney company. Sports there are really intertwined with cartoon characters: Mickey Mouse, Donald Duck and Elsa are always somewhere nearby.

There is also everything for the top leagues, dozens of sports facilities are scattered on 89 hectares: 16 baseball courts, 17 grass fields, which, depending on requests, are equipped for American football, soccer, field hockey, lacrosse and other types, as well as three basketball centers – in total, 16 sites can be organized there, with the restart of the NBA there will be fewer of them, because part of the space will have to be occupied by temporary infrastructure for broadcasts and amenities for teams, but they will play on different ones – in order to apply home markings on the floor (this is important for the image and commerce).

The sports complex is part of the huge entertainment city Walt Disney World, which was opened near Orlando in 1971. There are four theme parks (including the “Magic Kingdom” with the same Cinderella Castle from the Disney screensaver), two water parks, 27 stylized hotels and 9 more chain hotels.

it the largest Disneyland and officially the most popular holiday destination in the world – more than 50 million visitors annually, most of them come for at least a few days.

You can walk around Disney World even now thanks to Google-panoramas – here here, we meet near this installation in the sports part. 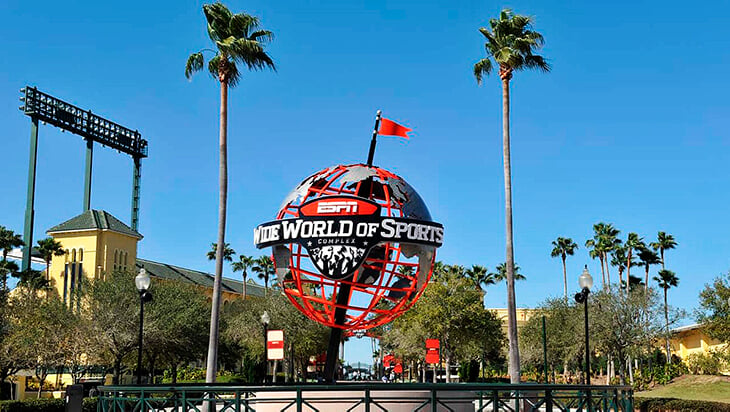 It all started with the Disney Marathon (the record was set by a Russian), the project was started by a former NFL player

Disney opened the Wide World of Sports Complex (WWSC) in the spring of 1997 and spent about $ 100 million on it. The initiator was former footballer Reggie Williams (14 seasons in the NFL), who was hired as vice president in 1993 to develop the sports direction at the company.

At that time, many wondered why Disney had such a large sports complex at all – they officially named four reasons to get involved in the project: to help promote Disney World as a whole, to get additional bookings in hotels on the main territory, to attract new sponsors and expand the idea of ​​Disney World “- to be seen not only as an entertainment, but also a sports center.

“Disney” entered the sport back in 1994 – then they held the first “Disney World Marathon”, starting every January until now. And the first two races, by the way, were won by the Russian Leonid Shvetsov – in 1995 he set a record, which no one has yet broken (in 1996 and 2004 Shvetsov went to the Olympics, but finished far from the medals – 66th and 13th).

Running is still one of the side business areas of Disney: the structure has a subsidiary runDisney, its office is located just in the Wide World of Sports Complex, which began to build six months after the second marathon in Florida. 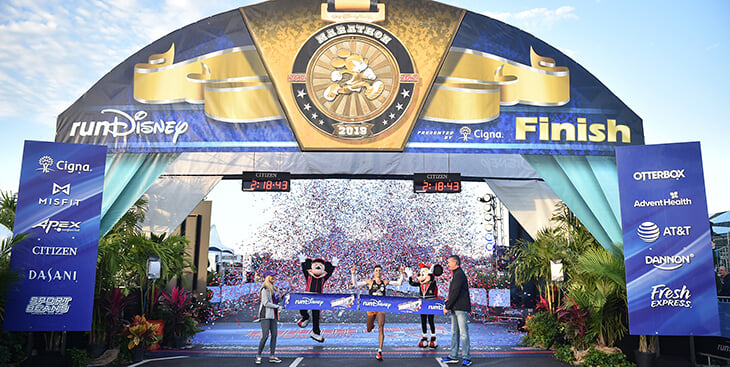 The name of the complex is a reference to the legendary sports program Wide World of Sports, which had been aired by that time for 37 years on the ABC channel (part of the Disney family). The Broad World of Sports showed something that did not get on the classic air of that time: usually the release was a mixture of two or three broadcasts – for example, in the early 60s, it was there that the Americans first saw Wimbledon, the decisive matches of the NCAA, the Grand at Monaco Formula 1, as well as curling, rodeo, badminton, surfing and other non-top types. The show was launched in 1961 and closed only in 1998 – ten years later Time magazine included it in the list of the main television programs of American television in general, and the brand still lives on in the name of the sports complex.

Disney has filled the complex with tournaments to lure children with their parents: they are additionally sold tickets to amusement parks

At Disney, they immediately thought about filling the infrastructure: they signed several long-term contracts with organizations holding tournaments. One of them is the Union of Amateur Athletes, which oversees many sports.

The president of this diverse federation, Bobby Dodd, said that in the mid-2000s alone they organized 30-35 events a year and brought 30-35 thousand athletes to them. Not only this is impressive, but also the total number – thanks to these events there were four times more guests in the complex – about 125 thousand people, because parents most often came with their children.

Disney opened the sports complex just as organizations focused on the development of children’s and amateur sports appeared in many cities, and the industry was just preparing for the jump, ”says Dodd.

Besides, Disney itself started organizing the competition – in order to purposefully fill empty spaces in the schedule and saturate the calendar as much as possible… According to Michael Milley, Director of Sports for Wide World of Sports, over the years, Disney has brought the percentage of its own events to a third. For example, he created the Disney’s Soccer Showcase for children from scratch, which quickly became one of the main events for young football players. 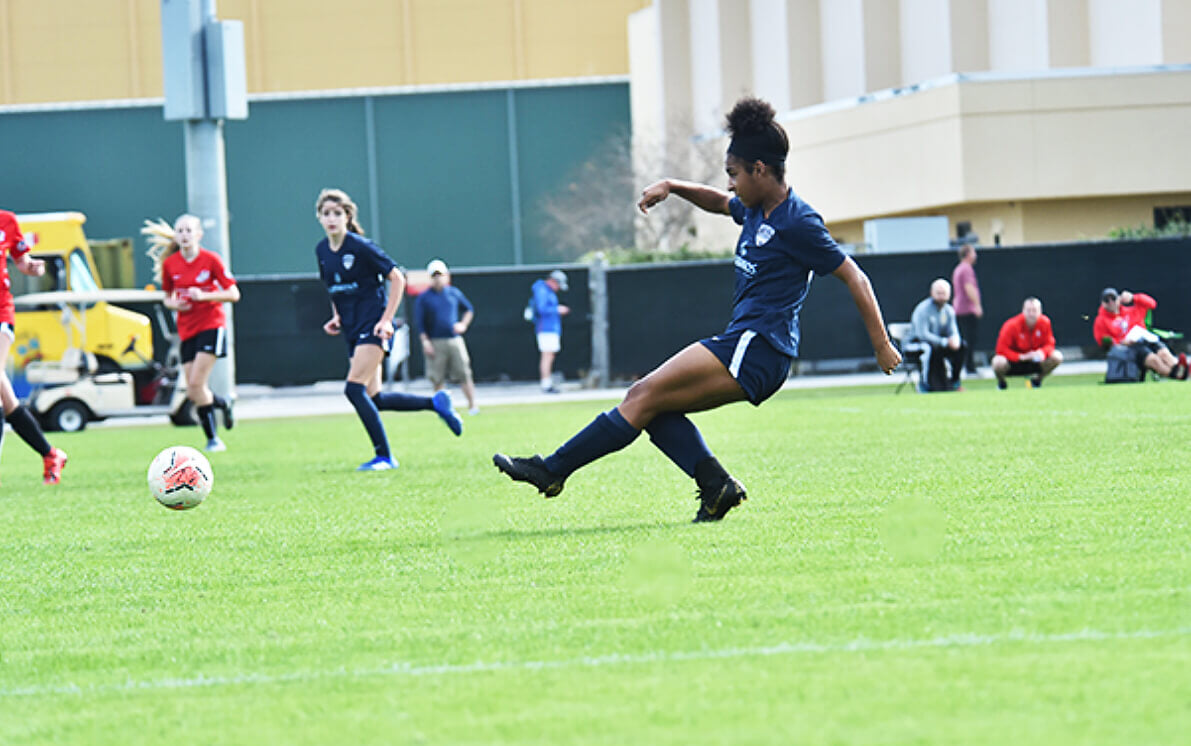 For Disney in such tournaments, it is definitely not the level of the teams that is more important, but the mass character – it is not difficult to achieve it, because the parents are ready to pay for the trip “two in one”: both to the tournament and to Disneyland. And when booking, you almost always have the opportunity to choose a package offer – additional days at the hotel before or after the competition, plus a ticket to the theme parks.

In 2006, Reggie Williams, without specifying the exact number of visitors and revenue, said that the business performance of the complex in the early 2000s easily exceeded even the most optimistic plans. It is known that in June 2005, Wide World of Sports was visited by the millionth athlete. And Time reported that in 2016 the complex received 385,285 athletes and that this figure has grown by 28% in five years.

“Our business model would never have been nearly successful if we hadn’t become a top vacation destination,” Williams said at the time. – And we became one because Disney already attracted all children, and children who love sports are now doubly attracted“.

His colleagues confirmed that they were right with the trend: they noticed the desire of parents to find non-standard entertainment for their children for the holidays and the willingness to travel further from home for this, to spend more on trips. Over time, the average age of visitors also decreased: younger parents began to bring (or send with teams) younger athletes.

A significant part of Wide World of Sports earnings are partnerships: Disney sells rights to traditional tournaments and hosts new sponsored events. They also cooperate with professionals: for example, for more than twenty years (from 1998 to 2019), the MLB Atlanta Braves team has annually held training camps and friendly matches there – at the Champion Stadium, which seats 7,500 spectators. Matches of the Atlanta farm club are also held there, and in 2007 and 2008 Tampa Bay Race played two home games of the MLB season in WWSC.

The commercial names of specific arenas within the complex are also important, and the more events Disney World attracts during normal times, the better the name can be sold. For example, one of the arenas where the NBA matches will be held is called the Visa Athletic Center, the other is the HP Field House. Baseball Champion Stadium is also a trade name, Champion is the brand sportswear. 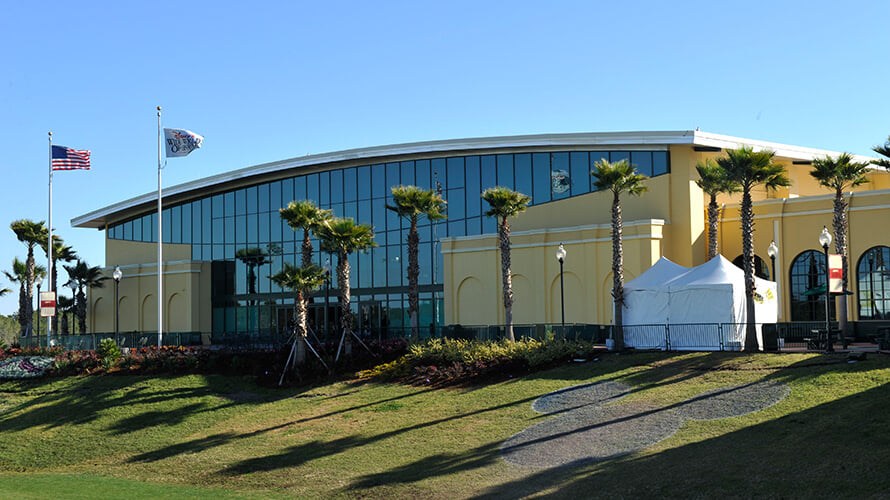 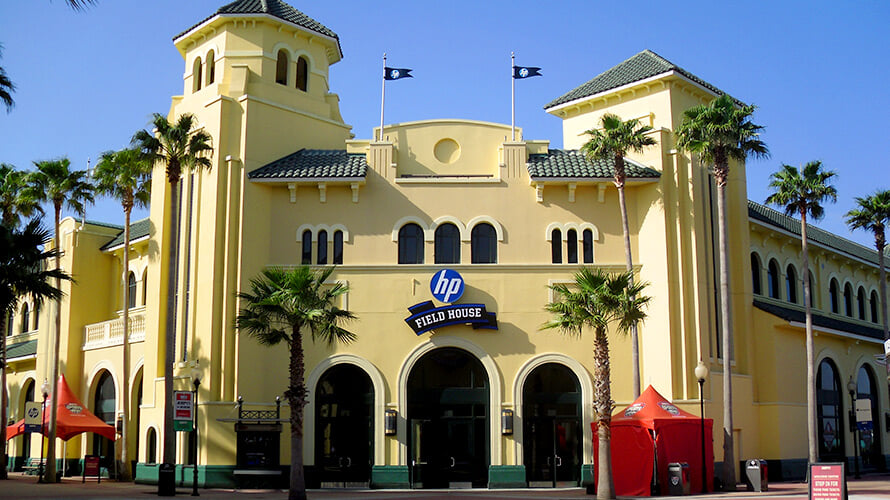 No wonder Wide World of Sports wants to cooperate with the NBA and after finishing the season: the organizations became partners long before the virus: they are holding the final of the Jr. The NBA Global Championship for 13-14 year olds (gathering 32 teams: boys and girls in half, eight American and eight from other regions in each grid) and brought the pre-season women’s NBA tournament.

Since last August the complex has an entertainment center NBA Experienceco-opened by Adam Silver and Disney boss Bob Yeager is 44,000 square meters that immerse children and adults in the NBA world. Something similar a year and a half earlier in Times Square, New York opened NFL – but there is an emphasis on mass audiences in the center of a big city, but here they are integrated into the line of other entertainment Wide World of Sports and Disneyland in general. 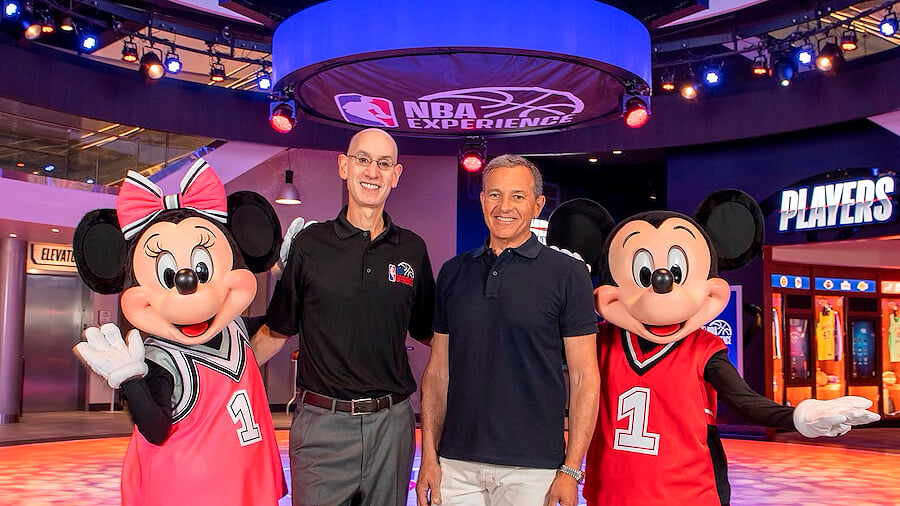 It is obvious that now Disney has big problems: Wide World of Sports has not been working since March 15, Disney World fully opened on July 15 after four months of inactivity, but, of course, with a lot of restrictions. Thanks to MLS and the NBA, the complex comes to life much faster – the clubs have booked hundreds of hotel rooms, the company was able to return to work at least part of the 45 thousand employees who were sent on indefinite leave in the spring. According to third-party estimates, the league will pay the complex a total of tens of millions of dollars.

There is another intersection: this is ESPN WWSC, and just for ESPN, part of the Disney company, the restart of the NBA is the most important economic injection… American media analyst Michael Nathanson estimated that the channel would receive less revenue from advertising in basketball broadcasts at $ 481 million.

Essentially now one Disney department helps another save that money…

In relative comfort and with Mickey Mouse waffles. 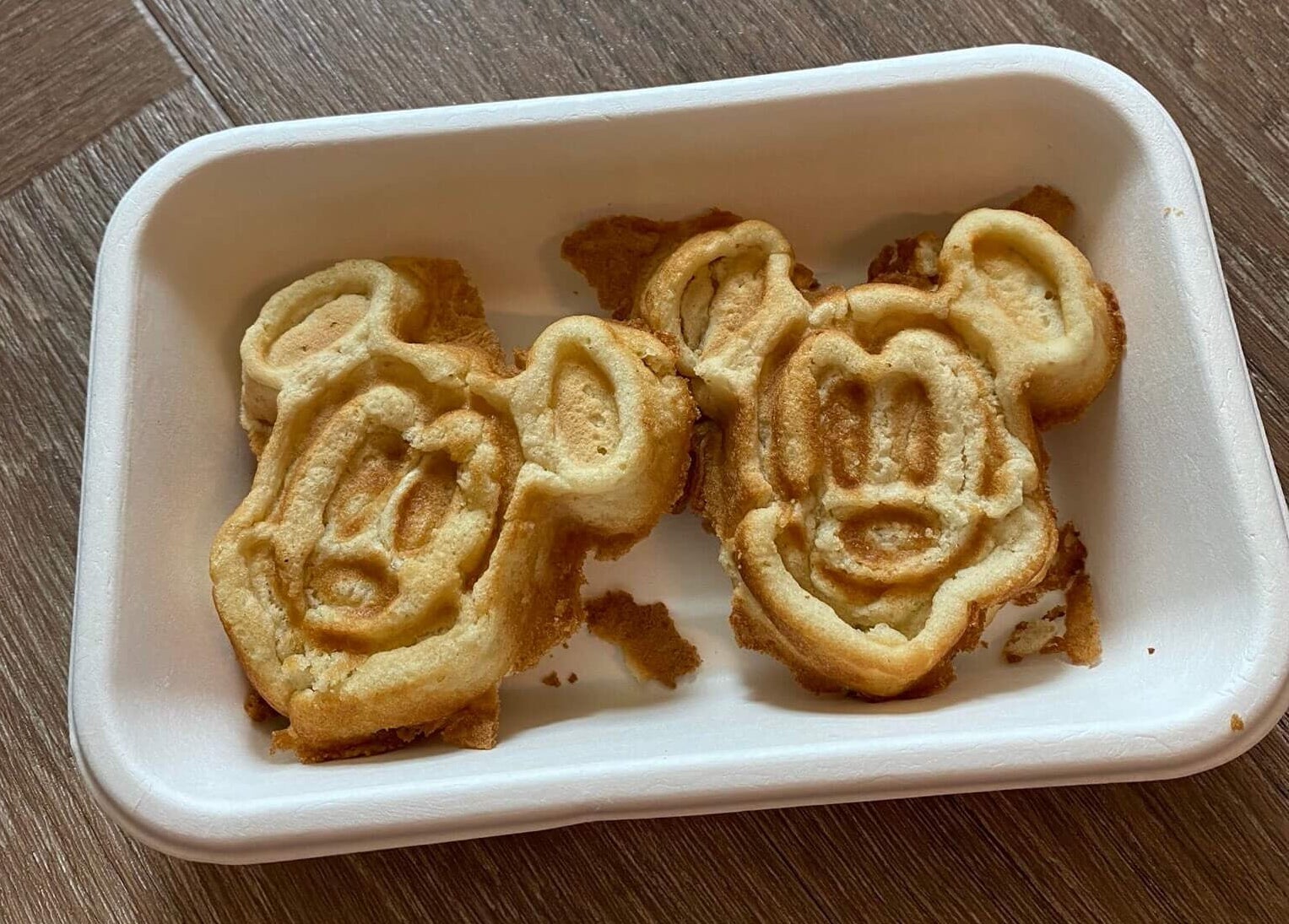 How exactly will the NBA bubble season resume? Here are all the details

How much money will players lose? Who will be signed for the end of the season? Can I refuse to play? Financial issues of the NBA restart

Smart ticket sales in Poland: roommates are sitting next to each other, social distance is created automatically, attendance grows by 20%

Girl of the day. The Judge From Poland Who Will Drive You Crazy – Girl of the Day – Blogs