For three Intas in a row, Fnatic’s Dota roster cannot jump above the top 16. Remembering the last squad that climbed high enough: Fnatic before TI6

A few months before the 2016 Main Event, Fnatic’s roster included:

The first major tournament for this roster was the home (judging by the region) Major in Manila, where the team performed very well, taking 5-6 places, losing only to the future finalists – Team Liquid.

It seemed that such a result was enough for an invitation to TI6, but everything turned out a little differently. The last of 6 invites went to Natus Vincere, although at the same Major in the Philippines they performed worse, taking 7-8 places. Perhaps decisive in this invitation was ESL One Frankfurt 2016, in which Mushi and company finished last, while the CIS team reached the final, where they lost to OG 3-0.

Fnatic, however, received an invitation only to the closed qualifier for The International. 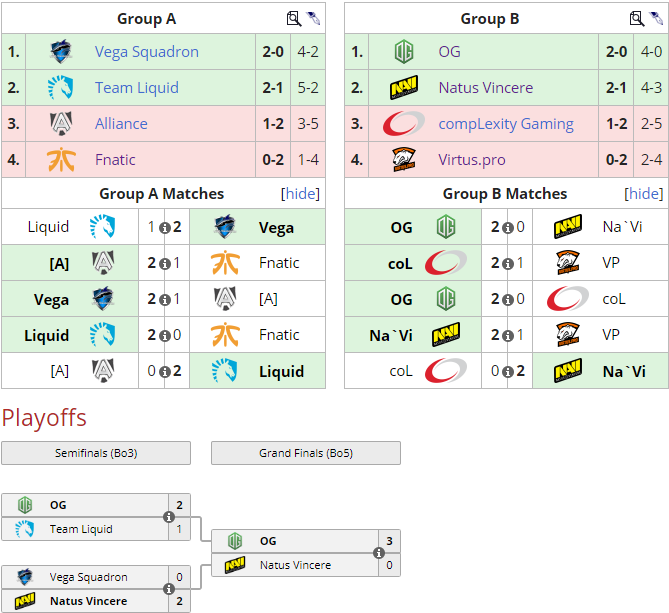 ESL One Frankfurt 2016, after the results of which, most likely, Natus Vincere was invited to TI6, and not Fnatic.

Qualifying for The International 2016

Fnatic made it through the group stage in qualifying for TI very confidently, losing first place in the replay of TNC Predator

In the playoffs, the team lost only one map at all, it happened in the grand final against Execration. As a result, Fnatic is going to TI6! 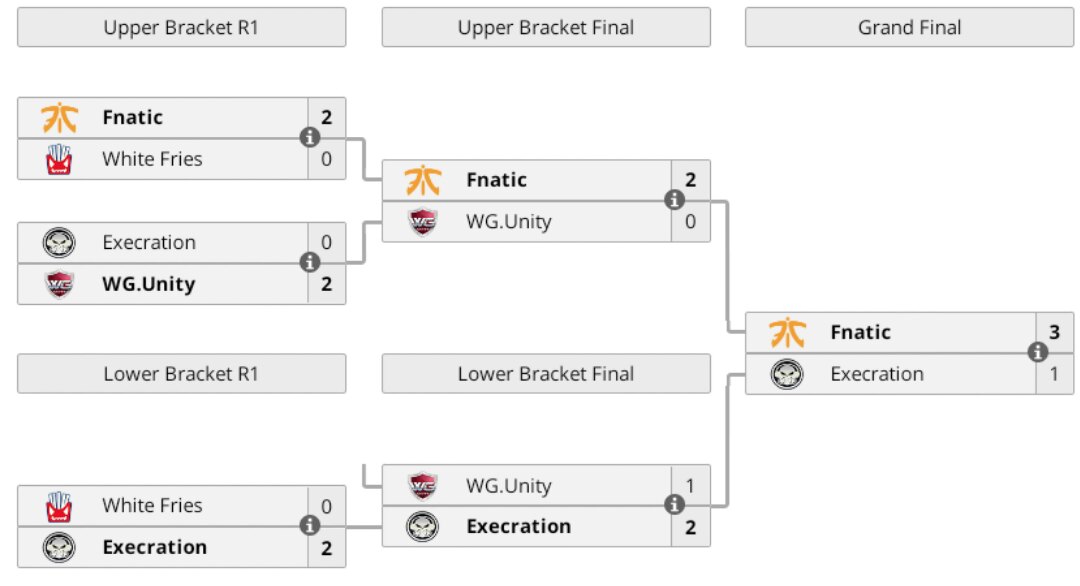 Fnatic’s performance at The International 2016

The group stage for Fnatic started worse than ever. During the first 5 bo2-series, the team won only two maps, both from Team Secret. Before the last game day, the team had only two points and the last place in the group. But in the remaining two matches, Mushi and company managed to score 3 points, beating Vici Gaming Reborn 2-0 and tied with MVP Phoenix (it is worth noting that the Koreans played 6 out of 7 games 1-1 over the entire group stage).

After the group stage, Fnatic took 5th place in the group, which nevertheless sent the team to the lower bracket, where it was to meet with Escape Gaming. Then Midone did not even suspect that after some time he would play with two players from the European team in one team. It’s about YapzOr and KheZu.

But then future teammates did not become an obstacle for Fnatic, and the team moved further along the lower bracket, where it again had a meeting with the team from Europe – Alliance. Fnatic won again, even the most signature pick of the TI3 winners – Puck, Nature’s Prophet, Rubick, Enchantress and Lifestealer – didn’t stop them.

A little later, Team Liquid and MVP Phoenix were defeated with the same score 2-0. In the match for reaching the final of the losers, the team from Malaysia still lost to the future finalists – Digital Chaos.

As a result, Fnatic is ranked 4th – the highest in the history of the organization.

Immediately after the end of the main tournament in 2016, news appears in the info field – there will be changes in the top 4 Inta. After some time, this information was confirmed. Mushi and Ohaiyo will be building the roster again.

The official announcement said: “We have come to a mutual agreement that now is the time for the players and the club to part with each other to open the way for new opportunities.”

Thus, Midone moved to Team Secret, DJ – to Execration, and 343’s fate at that time was unknown.

In place of the departed players came the TNC troika – Demon, eyyou and Raven.

Mushi commented on these changes: “Our mid lane and two supports left the team after TI6. I contacted DeMoN and he suggested that there are internal problems in TnC, so they can no longer play together. He took another support from the team. (Eyyuo) to join Fnatic. I wanted to play mid so we needed a carry. On DeMoN’s recommendation we invited Raven. Fnatic’s current roster is stronger than at TI6 but we need a little time. After TI6 many players want to join to a strong team. I can understand my teammates, so I didn’t stop them from finding a team that suits them better. One of my teammates wanted Fnatic to sponsor his roster, not us. I think it happened there some kind of rearrangement or players changed their minds, this is a normal situation “

Further history of Fnatic will be told further when it comes to the players of that roster. 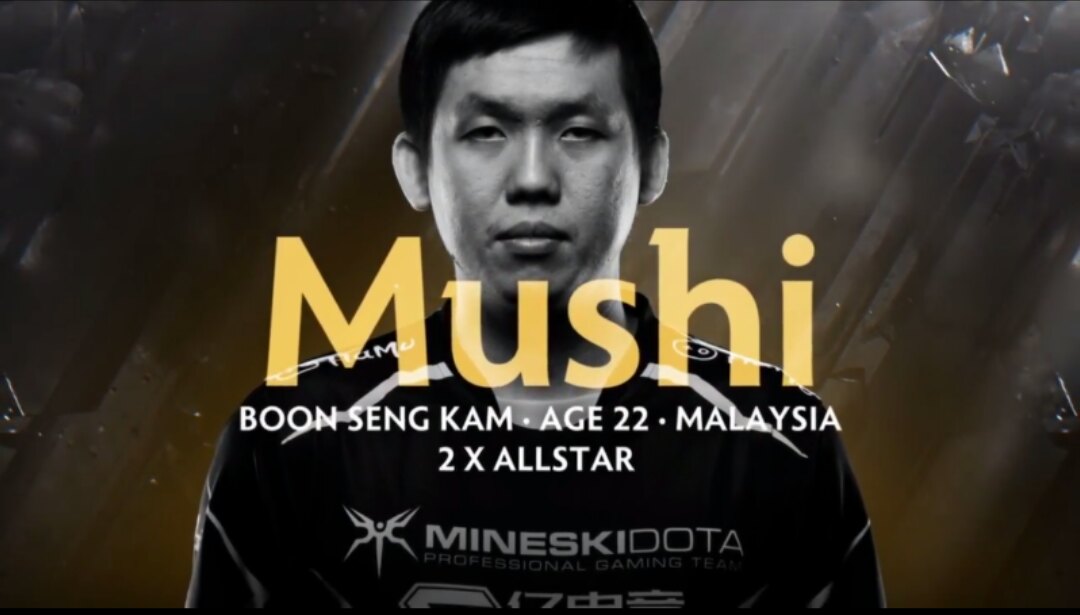 After TI6, the new Fnatic roster didn’t play well. The team could not qualify for major LANs, and at the tournaments where they received an invitation (ROG Masters and ESL One Genting 2017) they could not rise above the 8th place.

As a result, on February 6, 2017, the player leaves the organization.

Mushi’s parting comment: “I would like to thank the organization for all the support and the opportunity to play for Fnatic. Thanks to my former teammates. Thanks to the fans who believed in me and supported me. I am leaving Fnatic as a player. I am really I’m not sure what the future holds for me. I look forward to what lies ahead! “

At that time, it really could have seemed that a strong decline awaits the player, and soon a complete retirement. But the legend of the Malaysian Dota had a different opinion on this matter.

After Fnatic, the player moved to Mineski, where after TI7, the team started to see results. On the first Minor of that season, which was held in Kiev, the team took second place, losing only to the current world champions – Team Liquid. But a week later, Mushi won another minor – PGL Open Bucharest, beating LGD Gaming in the final with a score of 2-0.

After the victory in the Romanian capital, the team had a slight stagnation, in 5 months Mineski twice took 3-4 places in the Minors. This continued until DAC 2018, where a team from Southeast Asia won a sensational victory. That tournament had the status of a Major, and first place in it actually meant getting to TI by DPC points.

At TI8 itself, the result was ambiguous – 9-12 place, after which there were changes in the team.

Unfortunately, Mushi did not have more success in his career. He played in many Chinese and Asian teams, trained Mineski at TI9, but as a player he is not remembered for anything else since TI6.

At the moment he is still a player, plays for CR together with his teammate for 2016 – Ohaiyo, which will now be discussed. 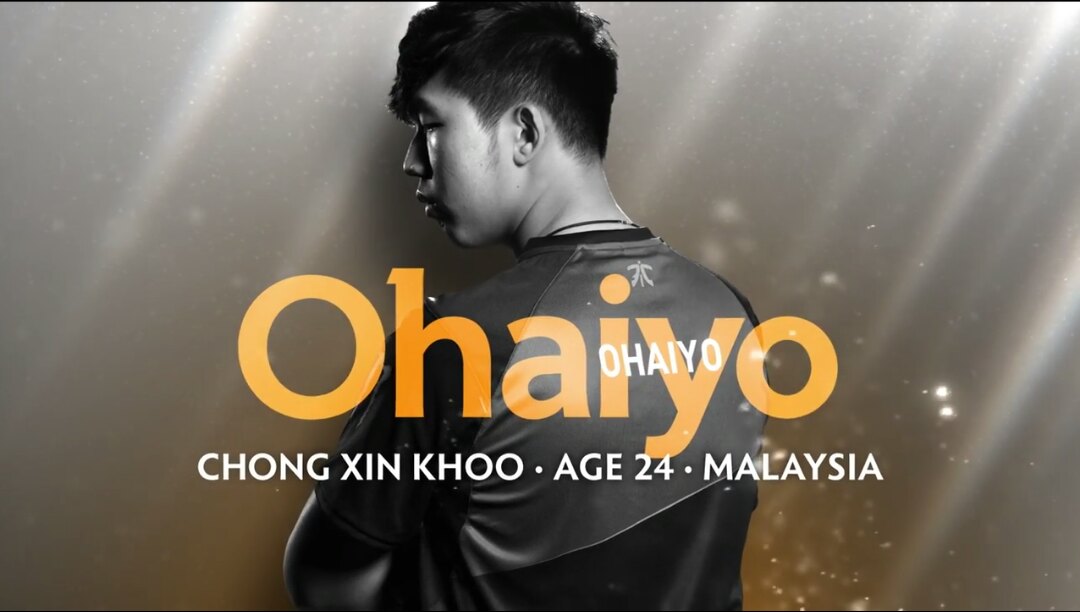 Offlane Fnatic has had a very, very bad career. He did not leave the band in February 2017 with Mushi, but the team had no success until TI7. Fnatic kind of unexpectedly qualified for the main event of that year, but they failed miserably without even leaving the group.

After such a fiasco, the roster underwent changes and EternalEnvy appeared on the roster. Together with him, the team was able to take second place at Dota Summit 8, and also scandalously kick Ohaiyo. I think many people remember the very story of the pizza party where the Malaysian offlaner became the victim.

This is how CArn, the general manager of Fnatic, commented on the situation: “It should be noted that this decision was not easy for us. And although the time for replacement seems not the best, we simply had no other choice, given that the rosterlock was already very close. to acquire a player who, in our opinion, will help the team develop further and bring it closer to the first title.Ohaiyo has been the core of the Dota 2 roster since our return to the stage in 2015. We respect him and thank him for his loyalty and contribution to the work of the team and organization I will never forget the amazing performance he and his team showed at TI6, finishing fourth. We are currently helping Ohaiyo find a new team. We are also ready to continue working with him in a different role, as not many players can boast of such experience and professionalism. “Since Ohaiyo helped the team qualify for the Major in Katowice, Fnatic will pay him a percentage of the LAN finals.”

After that scandal, the player’s career very quickly went downhill, as part of the LFY he was able to get to The Bucharest Major, but there the team took the last place, sharing it with Vega Squadron.

Two years later, the player never made it to any major LAN as a player, and is currently playing for CR with Mushi. 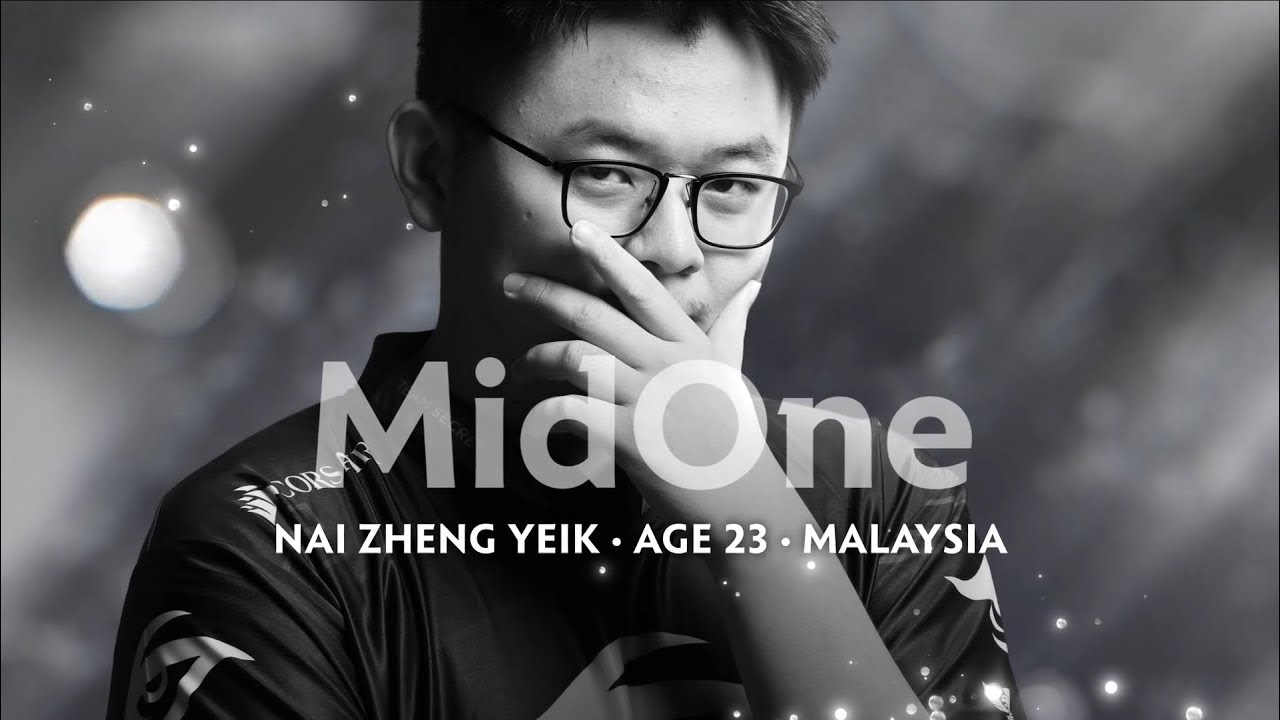 You can talk a lot about this player, but I think everyone knows everything about him. Three years at Team Secret, where he won 9 major LANs.

At the moment, the player is OG, although his nickname was not particularly logical – the Malaysian changed position and played 3 positions, but after Seb returned to the MidOne team he returned to his canonical position again! 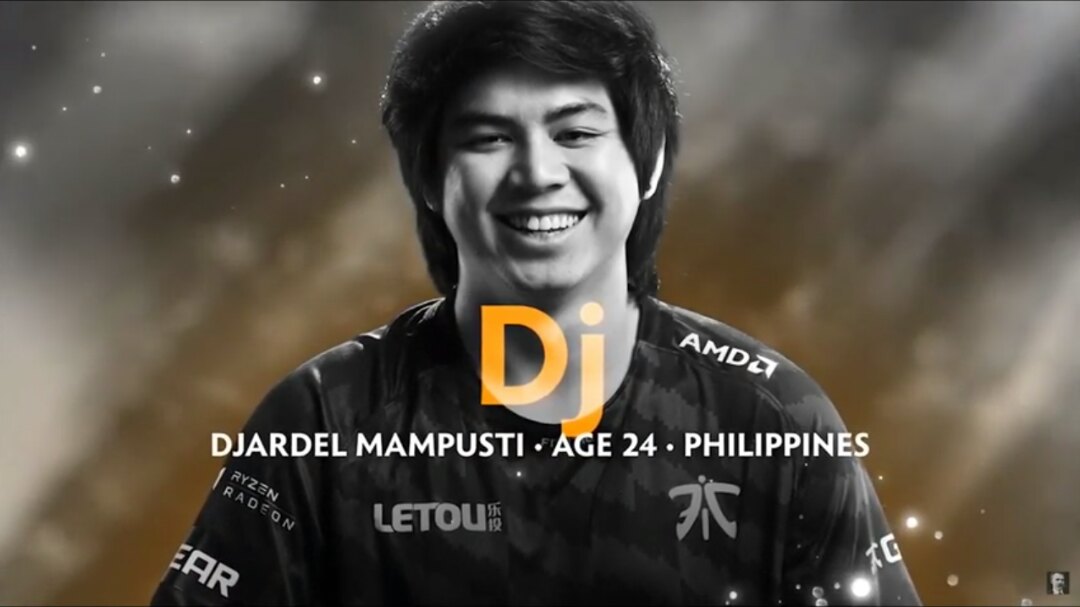 In Execration, Dj was only able to take second place at ROG Masters 2016, losing to Team Secret in the final, so after failing to qualify for the Kiev Major, the player returned to Fnatic.

In order not to repeat what has already been said in the history of Ohaiyo, fast forward to February 2018, when the third position of the collective was Universe. Together with him, the team took 4th place at ESL One Katowice, 2nd place at Dreamleague S9 and again 4th place at ESL One Birmingham 2018.

There were not enough points to get to TI8, but the team had no problems in qualifying, so Fnatic still went to the main tournament of 2018. But there the result was again terrifying – 13-16 place.

This season, Fnatic took the 9th-12th place in the Majors twice, and in the last LAN before the quarantine, Dota Summit 12, they won.

At the moment, Dj is still a Fnatic player, the only one from the roster who finished 4th at TI6. 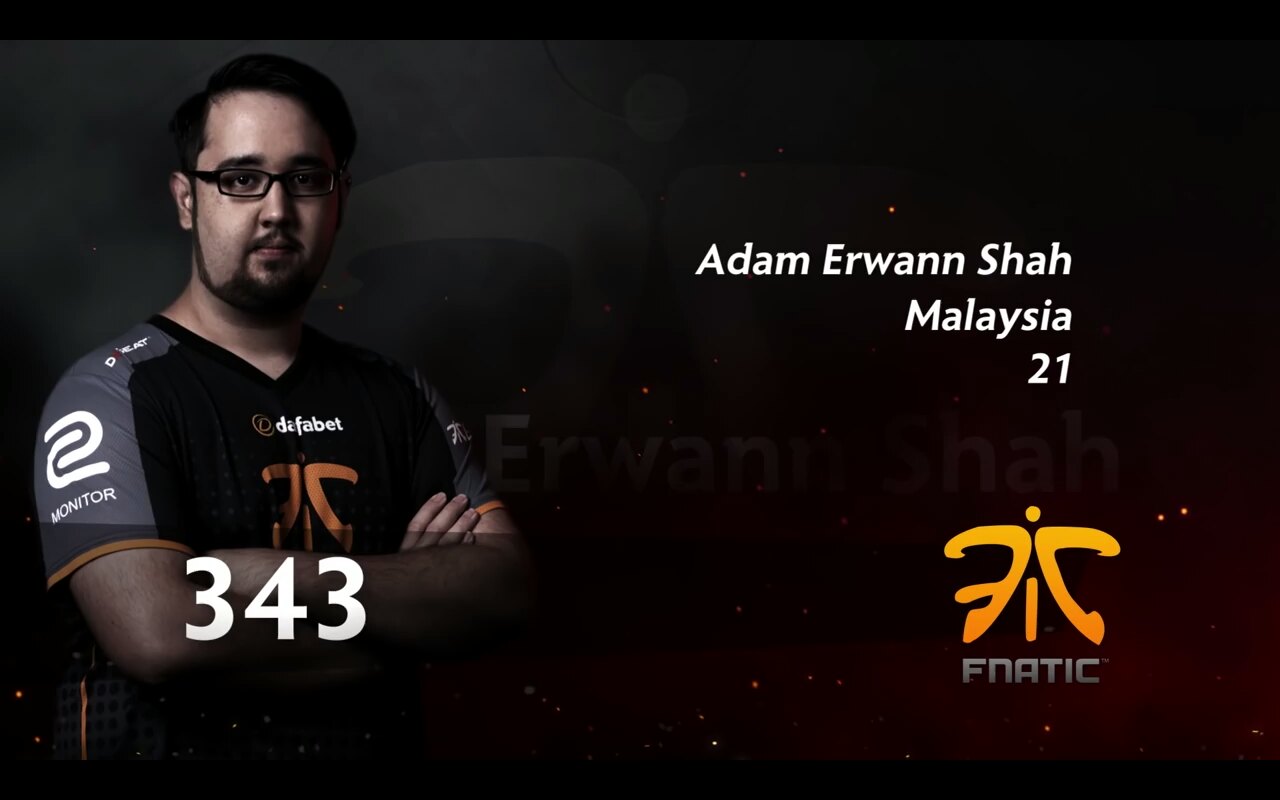 Of the 343 successes after Fnatic, one can only note the 3rd place in Dreamleague S10 in the RNG, although after this result the player left the team.

In the second half of last season, he played for CompLexity, but the team did not remember anything except the passage to the MDL Disneyland Major.

After TI6, he managed to train Fnatic, which lasted for about six months and did not achieve much success as a coach for 343 either.

No team at the moment.

That’s all, thanks for your attention!

How to collect beautiful inventory in CS: GO for just a thousand rubles? You can even save money! – Monologues about CS’e – Blogs