Forwards-pillars that can be useful for RPL clubs

We continue to explore the football market in search of quality forwards. In the first part of this series of materials – a selection of fast strikers for RPL clubs. 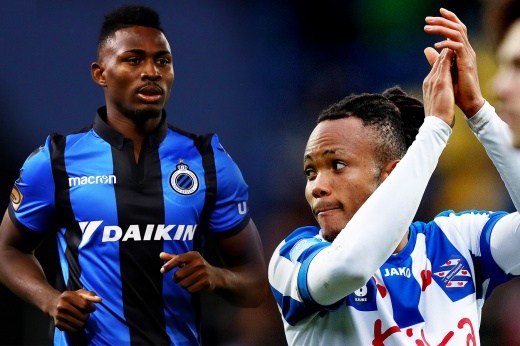 Top fast forwards that RPL clubs should pay attention to

These footballers will be inexpensive and will come to us.

Today we will look for a pillar forward.

Almost all Russian clubs have a player who performs this function. For some, this is the main function in the attack (“Zenith” – Dziuba, “Lokomotiv” – Eder, “Rostov” – Shomurodov), someone else’s auxiliary (“Spartak” – Sobolev, CSKA – Shkurin).

Having watched hundreds of actions of the “pillars”, it is worth saying that the players of this role (with rare exceptions) cannot be fully considered footballers. They are like goalkeepers and cannot play any good quality in any other position on the field.

Let’s start with the main conclusion of the study – good pillars know their maneuver very well and do not go beyond it. They do not endlessly fall on the flank, do not go into an unobvious stroke, do not try to swing the defender on their long legs.

Let’s move on to the numbers. In research we adhere to the principle of “cloning”. And first, let’s look at the prominent representatives of this position in the RPL to find the characters that we want to clone. 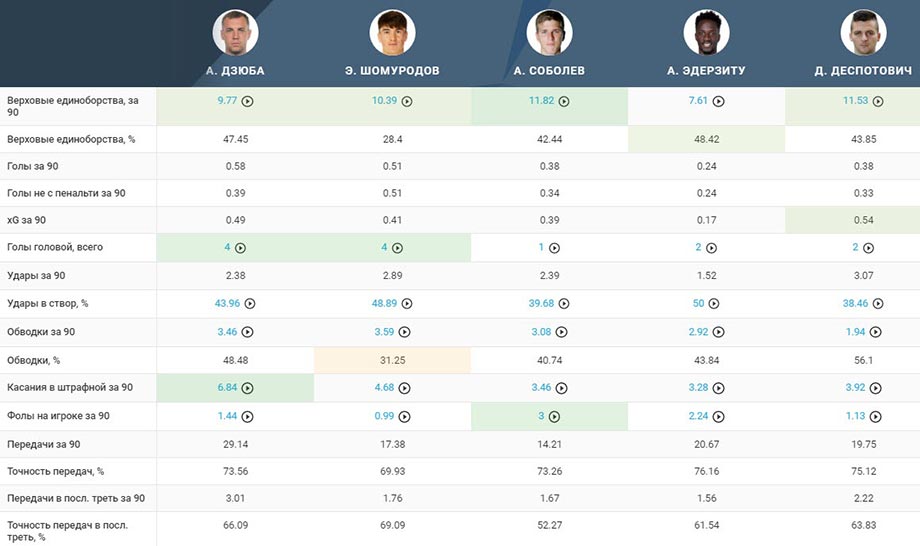 Dziuba on this list is a benchmark, there are several players like him in the world. The first is Zlatan. Another one available to our top clubs will be on our shortlist.

Eder’s basic utility is described by “grasping for balls”. This is a “beggar option” for getting out of defense: kick at Eder, and he will either qualify and pass on those who know how to attack, or get a free kick. All attack indicators are failing. If “Lokomotiv” had other options this season, the whole season of “railroad” could have gone much better. 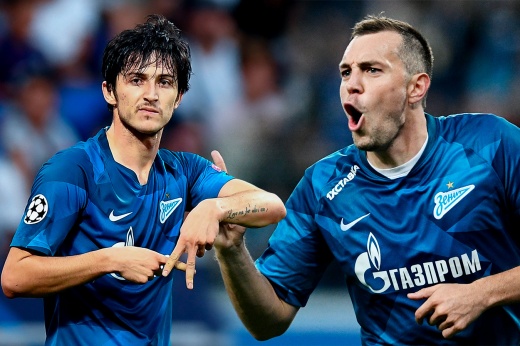 Azmun and Dziuba brought Zenit 13 victories. Who is most likely to score decisive goals in the RPL?

Midfielders were among the many forwards.

Shomurodov and Sobolev spent their first full season in the RPL

Eldor has not yet found himself and performs many actions that are not characteristic of the pillar. For example, it goes into a stroke, while 70% of attempts go nowhere. He is well included in the game of his team, opens most often, except for Dziuba. You feel disappointment seeing 28% of the won riding single combats. For a player with a height of 190, this is prohibitively small.

Sobolev for a short but bright segment in “Wings” managed to be inspired by “Spartak” and immediately took him. Meanwhile, Alexander is very typical for all additional indicators, and therefore a low scoring column. If Domenico Tedesco decides to use Sobolev as the main option in the attack, Spartak will not expect anything good. And if he leaves the bench, nothing good awaits for Sobolev himself. 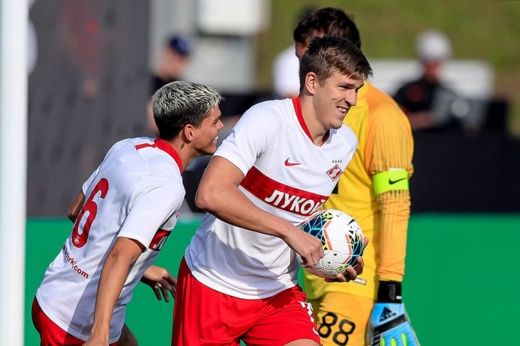 “Spartak” wants to buy Sobolev, although he did not score a goal. Is it absurd or the right decision?

The trouble of Shomurodov (190 – 76) and Sobolev (195 – 85) is their size. Growing up to 185 cm, footballers lose significantly in speed and motor skills. This applies to dribbling and swing before hitting. When you lose in speed, you can win a position only at the expense of the body: either open up so that the opponent on the way of the ball collides with you and loses speed; or to take the ball so that the opponent, burying himself in your shoulder, does not have time to block the blow. Such defenders receive the prefix “top”.

I hope that in Rostov and Moscow right now they are well fed and forced to carry iron. This is the first thing to do when buying a slender tall pillar. 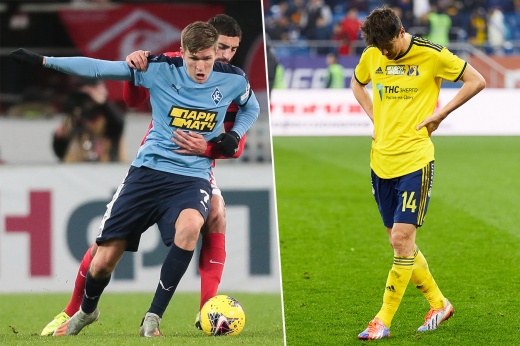 Shomurodov and Sobolev have been headless for 2 months. What happened to them?

Dziuba will soon overtake them in the scorer race.

It is curious that in a short period in Orenburg Despotovich proved to be the second best column of the league. “Ruby”, how do you do it? They took the vice-pillar of All Russia from the free agent market without a fight. This will be interesting to watch.

After examining the pillars that are quoted in Russia, we open the professional scout service WYScout and look for players with similar characteristics.

200+ players came up according to in-depth statistics – 73 of them were in the longlist – 14 were reviewed. The list even included Russian Ilyutsenko, who plays in the Korean league. And here is a shortlist of 5 candidates.

There are no players under the age of 25 on this list for the pragmatic reason that I have already indicated. To play effectively in this position, you need to be overgrown with meat. 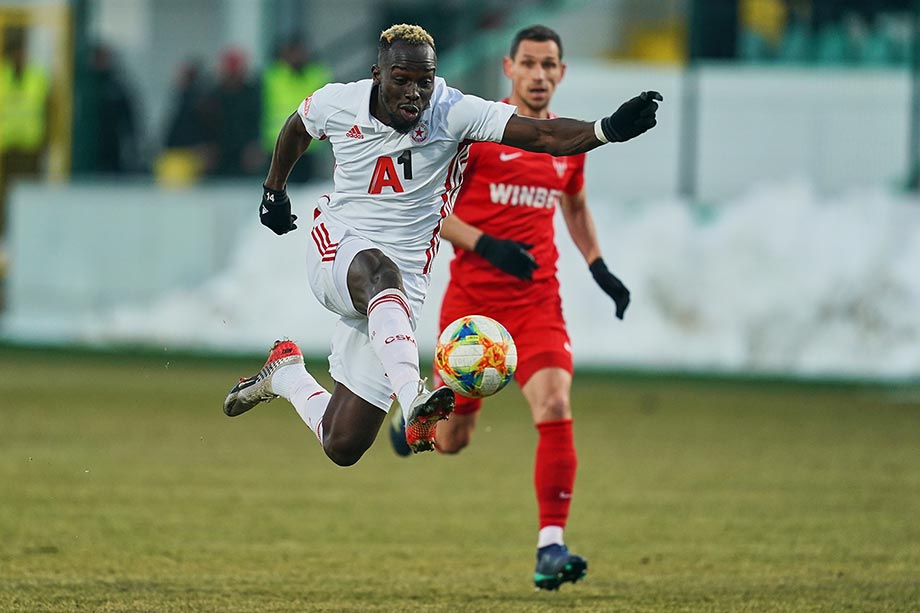 The player really liked the view. Despite the fact that the defenders in the Bulgarian championship are of an extremely low level, the forward has developed all the necessary qualities of a pillar and does not do anything superfluous on the field. Also noteworthy is his power manner of heading. He does not substitute his head, namely, hits the ball, often stitching the goalkeepers. 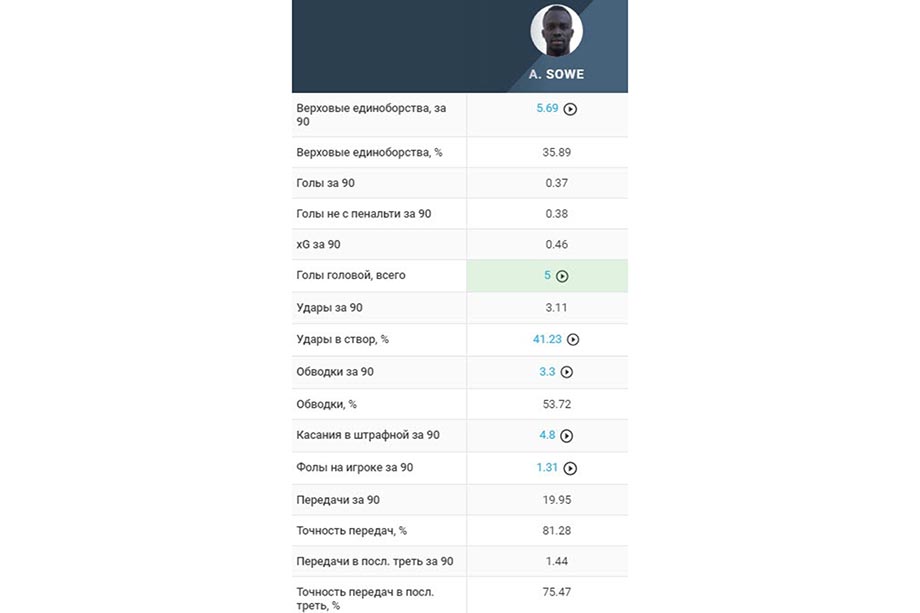 Even in Bulgaria, now they go on the attack through a pass, so they do not impose a horse fight on him. In official matches this season, he collected 15 + 2, 17 + 0 a year before. It smells like stability. 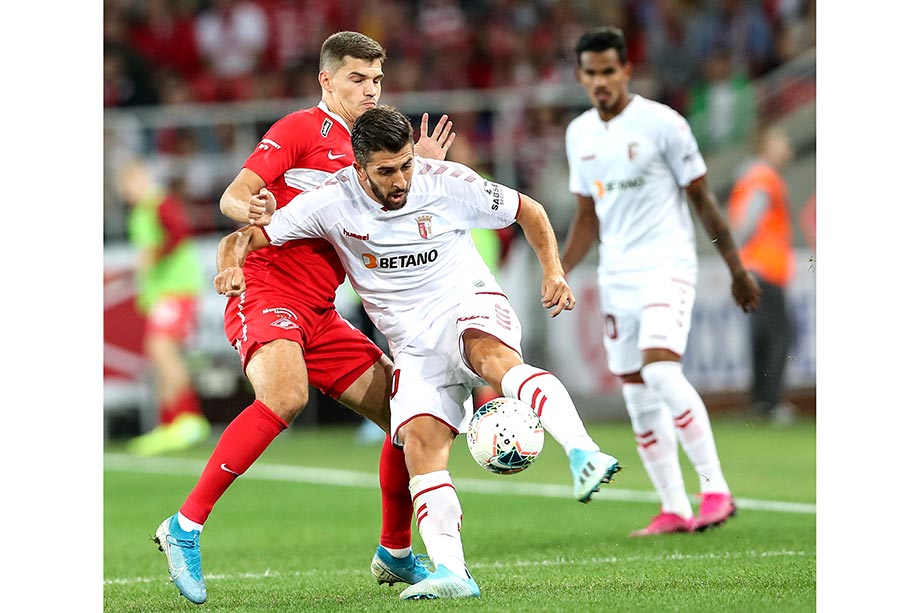 Paulinho is the most balanced forward on this list with 0.6 goals + 0.2 assists per game this season. The result is grandmaster. He always plays like Eder in his best matches. Accepts the ball, and if the position does not imply a hit, he quickly says goodbye to it. Despite the borderline growth, he “does not know how and does not go” in strokes. 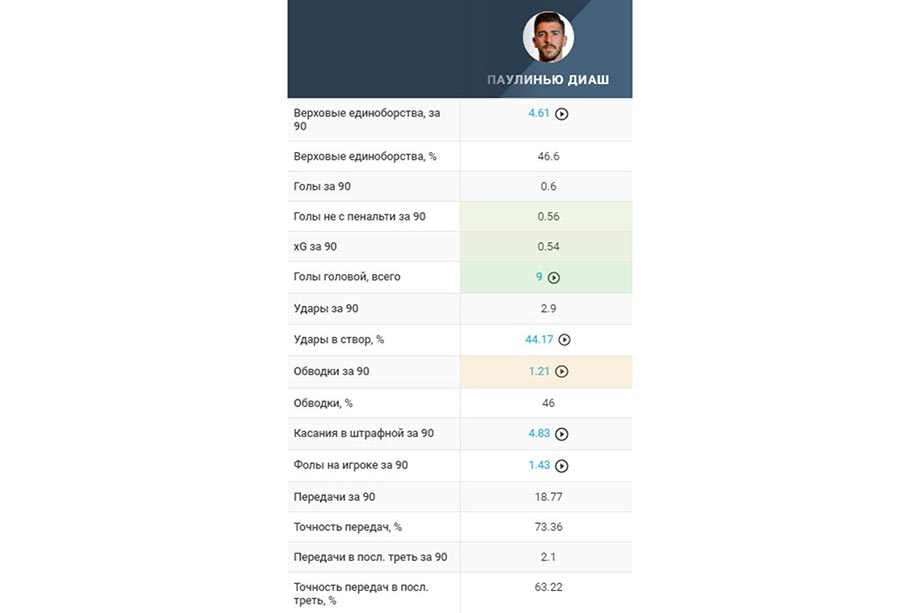 He scored 9 goals out of 25 in official matches of the current season, “on the second floor” he has few equal.

Video cutting of player actions for the 2017/2018 season, confirming its stability.

The player will strengthen absolutely any RPL team, but few will be able to afford it.

A player of this type is necessary for Krasnodar and Lokomotiv.

Perspective: competitor for the place of the “silver pillar” RPL with Despotovich. 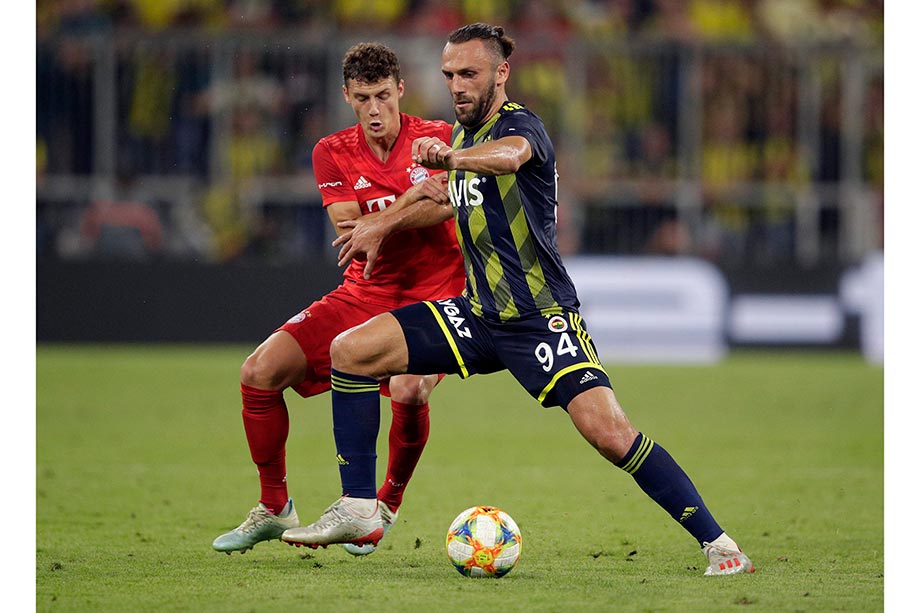 A ready-made player who, if Artyom Dziuba was not renewed, would easily and quickly replace him. Because they are “football twins”. Vedat is the king of the air (55% of the won riding martial arts against 47% of Dziuba). Slightly more hits than Dziuba. Slightly less involved in playing the ball. The rest of the indicators are comparable. 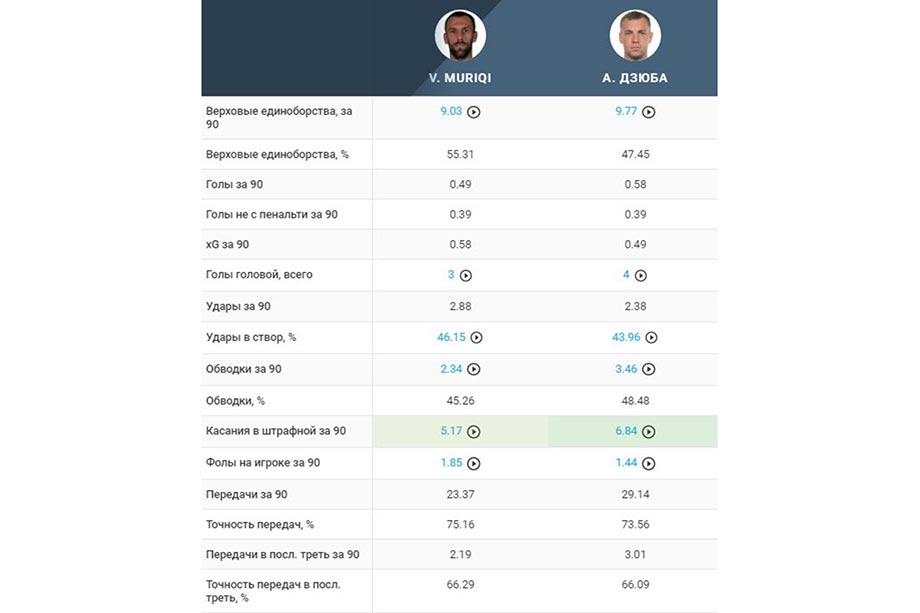 Fenerbahce will not be in a hurry to say goodbye to the forward. The Turks always knew how to bargain. However, Fenerbahce was left without European cups in the new season. And the Kosovar has something to dream about.

Video cutting of the best player actions, which makes it clear why there is a comparison with Dziuba.

Nobody will buy a player-function for that kind of money in Russia. This is the price of the main forward and the price that repels the idea of ​​buying this player. But, apart from its price, nothing else repels. 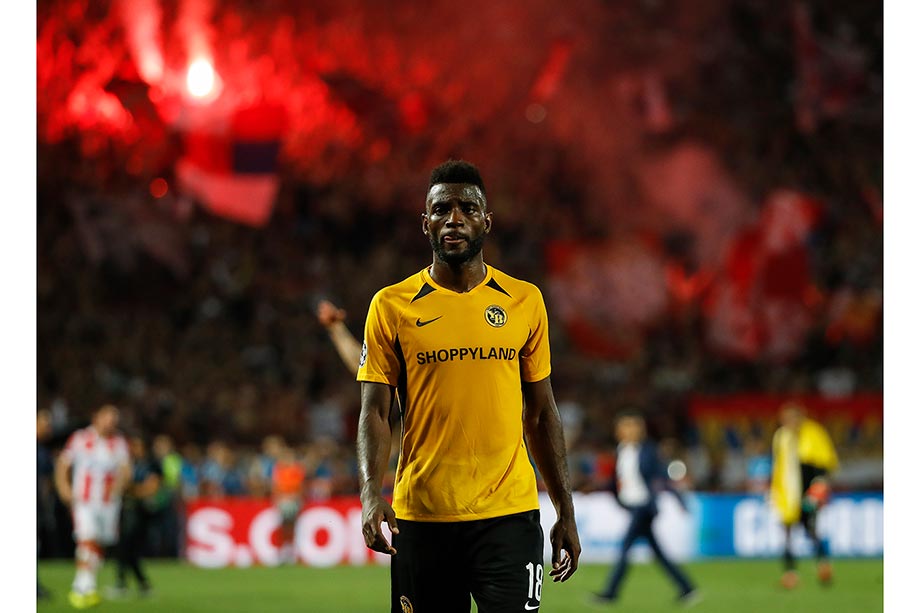 Favorite on this list. His 34 + 4 in all matches of the season is embarrassing and should be embarrassing for the scouts. But at the same time, in the previous three seasons, he issued a powerful 0.5+ xG per match. 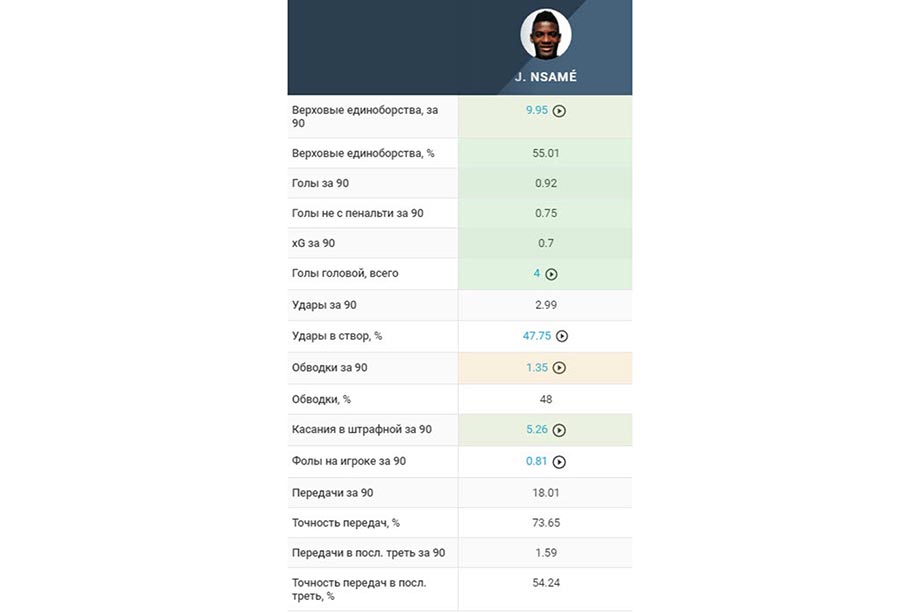 “Young Boys” “gave birth” to the most powerful and brightest striker since Doumbia. This should be used. Despite his age, if Nsame is resold in a couple of years to the club of the second ten of the Premier League, it will be possible to earn a lot.

Jean-Pierre will agree to exchange Swiss landscapes for a view from the window of a high-rise building only for a serious increase in his salary. And our clubs must be ready for this.

Perspective: top scorer of the next championship

And the heading “What, what if?” or a poet’s dream. 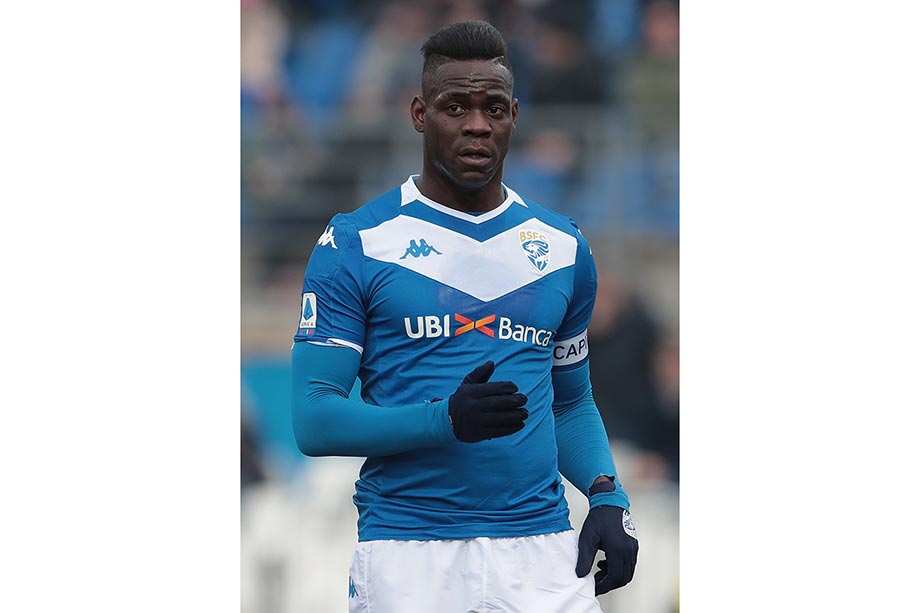 “Brescia” wants to break the contract with Mario, he and Raiola are still struggling. As bright as a blanket sewn from pieces of different fabrics, Mario’s career is coming to an end. Balotelli did not live up to the enthusiasm and expectations that were placed on him. And it won’t justify.

Player statistics are not worth giving. Mario is so abstract that it is not digitized.

Come and lead our league of fun. We will not expect much from you. We will be satisfied with the Mario who was in Nice and Marseille. They started wooing you early into Serie C. “Pension” near Lake Como can wait.

All goals by Mario Balotelli for Nice“.

Only an extraordinary person can bring an employee who did his hair half of his working time and figured out whether every fan at the stadium loves him. Our football is teeming with extraordinary owners.

RPL clubs that will strengthen: Lokomotiv, Spartak, Dynamo, Sochi or anyone else. Oh please! Mario will come and strengthen not only the team, but the entire league.

And finally, a summary table of candidates to compare the main characteristics: 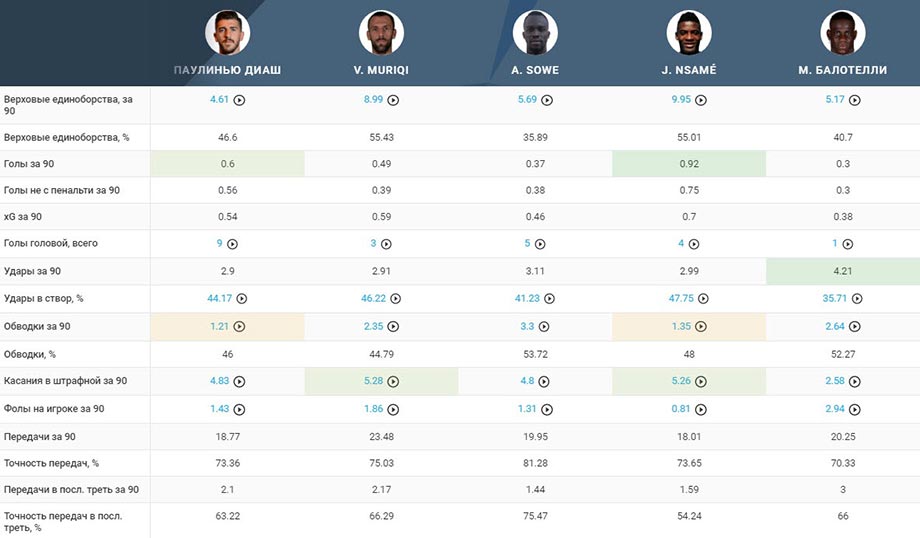 If you are a footballer and grow above 185 – eat and carry iron. And then you have a chance to be in the same top.

“Brothers are waiting.” Smolov showed how he talked via video link with Ignatiev and Barinov