The circle is complete.

Lokomotiv goalkeeper Nikita Medvedev, it seems, will not play for the Moscow club in the Premier League (or elsewhere) – by the decision of Loko CEO Vasily Kiknadze he was exiled to Kazankaplaying in the PFL. And there are still two whole years before the end of the contract.

Medvedev in 2016 became the main goalkeeper of the European Cup “Rostov”, although back in 2015 he was dusting for his native Izhevsk “Zenith” in the PFL.

The injury of Soslan Dzhanaev helped a lot – Vitaly Kafanov trained a 21-year-old guy so much that he gave a record dry streak in the RPL – 989 minutes (and broke Ruslan Nigmatullin’s record, although he promised to take the Amkar players for dinner if they score against Nikita. We couldn’t). Just think about it: the league debutant did not concede from November 30 to May 6, and even in the Europa League he looked very well in matches with Manchester United.

But Medvedev could not agree on a contract with Rostov – and in the summer he moved to Lokomotiv as a free agent. Loko was happy to grab the best young goalkeeper in the country. The transfer was not free: the agents were paid 4 million euros.

“Lunev’s departure to“ Zenith ”cost 4 million euros, Selikhov’s to“ Spartak ”- also 4 million. Medvedev’s transition to Lokomotiv cost the same. His agents said, “Well, if they pay four for goalkeepers of a similar level, why should we have three?” – Ilya Herkus recalled. 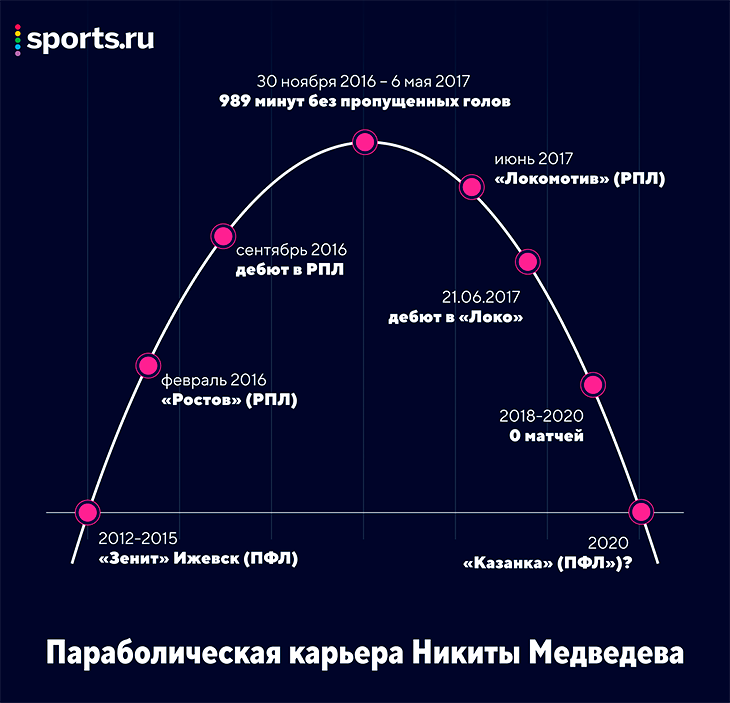 And the words of Nigmatullin, who swore in absentia with the young goalkeeper through the media, became prophetic. Here is what the former goalkeeper of the national team said in July 2017: “His acquisition is not advisable for either Lokomotiv or Medvedev himself. I believe that now Medvedev is hardly ready to compete on equal terms with the leader and the captain of the team, so Guilherme will not give him a place at the base, as a result of which we will lose the talented Russian goalkeeper for some time. “

It now seems that Nikita Medvedev initially had little chance, but it is unlikely that then many people expected that the not very stable Guilherme would not just fail, but also become the main goalkeeper of the Russian national team. And the level of Anton Kochenkov is a mystery. While Medvedev was the best goalkeeper of RPL, the experienced pupil of Loko was not a solid starting player even in the half-dead Tom. But in Loko, even Kochenkov moved the former Kafanov to third place in the rotation.

As a result, in three years at Lokomotiv, Medvedev played in two matches… On September 21, 2017, he lost in the Cup to Wings (2: 3), and a month and a half later, Loko beat Sheriff in the Europa League group: Nikita came on as a substitute in the first half after Guilherme’s injury and first conceded to the near corner, and then because of the penalty.

More Medvedev did not play for Loko in official matches. There were rare bursts like saves in the penalty shootout at the 2020 Premier Match Cup (Yuri Semin released a keeper specifically for them), but that’s about it.

And now – a return to the PFL.

Belarusians who want to watch the European Games. Good in sports and in life – Girl of the day – Blogs