How the US Army is looking for soldiers in esports: millions for ads, its own shooter, streams and reputation problems – One-way – Blogs

Twitch instead of the military registration and enlistment office is a new reality.

In 1999, Colonel Casey Wardinsky suggested that the US Department of Defense partially change its recruitment strategy and create a game that would increase the recognition and prestige of the army in the eyes of teenagers.

Three years later, America’s Army, a multiplayer tactical shooter inspired by Counter-Strike, was released. The plot is very simple – the US army confronts the enemies. Everything was as close to real service as possible, including pre-battle training, medical assistance and similar military ranks.

Two months after its release, America’s Army had 2.5 million downloads, according to War Play. The development cost $ 7.5 million (0.33% of the Army’s marketing budget), making it one of the best investments in the history of the US military. According to a 2008 study by the Massachusetts Institute of Technology, America’s Army had a positive effect on the army’s image in the eyes of 30% of teenagers, and among the cadets of the military academy at West Point 20% knew it. The game was so successful that in 2009 it even entered the Guinness Book of Records as the most downloaded military shooter – 42.6 million downloads.

The reason for this popularity is the successful release timing. In the aftermath of the September 11, 2001 terrorist attacks in New York City, many US adults volunteered for the service, while children fought terrorism over computers.

Over time, America’s Army’s popularity declined. Worthy competitors came out, and new recruits enrolled en masse in the traditional way. The US Armed Forces took seriously the gaming industry in 2018, when they did not fulfill the plan to recruit contractors – out of the declared 76 thousand, they managed to lure only 70. The reasons for this failure are mainly related to the American economy, where private companies pay much more. The army even relaxed recruitment conditions – removing some restrictions related to marijuana use, health conditions and violations of the law.

A year later, the army received the planned 68 thousand new recruits. Major General Frank Moot, recruiting commander for the US Army, attributed the plan to a change in strategy, according to which the main efforts are now focused on online recruiting and esports. Online advertising allocated 97% of the marketing budget…

All online activities of the army are aimed at looking friendly towards this audience. The military has long used video game-based training, which makes gamers valuable to the military: soldiers control drones thousands of miles from their base using controllers similar to traditional gamepads. “Gamers can become even better drone operators than experienced pilots,” says Muth.

The military sponsors esports and builds their teams. They care about new soldiers, not tournament victories

The recruitment of the squads continues: players are sought through public tournaments and invited to watch, but you can get a place in the team only by signing a service contract. All current players either serve now or are in reserve, and in addition to games, they receive military-applied specialties.

With such a selection of the composition, it is difficult to expect good results. The leadership of the US Army esports division understands this and openly declares that their main goal is recruiting. The ability to gamble should be just an added bonus for some, like a good salary and early retirement.

Esports advertising is another important part of US Army marketing. In 2019, the US Navy ditched Super Bowl ads in favor of sponsorship of tournament operator ESL and hosting Fandom. Seafarers are also partnering with Twitch – the platform allocates space to their broadcasts in a carousel on the homepage.

In addition to its own channels, the army is represented by advertising in Twitch Rivals – its logo appears during broadcasts on League of Legends, Valorant and other games. Sources on the Kotaku website say the deal cost the Navy approximately $ 1 million.

There is also direct sponsorship of teams. In partnership with ESL, DreamHack, Twitch and the Evil Geniuses team, the military plans to assemble a CS: GO team and make a six-part film about it.

The US Air Force is the most active in CS: GO. In 2018, they sponsored the Boston Major and even presented an alternative MVP award – according to HLTV, Tariq became the best player in the tournament, and Scudoodle received the prize from the pilots. Following the victory of Cloud9, the US Air Force struck a full-fledged one-year deal with the organization – the army logo appeared on the players’ uniforms, and in return they were promised to fly fighters. But apart from the presentation video for the whole year there were no public activities. The Kaesers competed in jersey with a sponsor, but never made it to the skies.

It is not known when and whether the project with Evil Geniuses will be launched at all, so now in CS: GO army ads can be seen only during the English-language broadcasts of ESL tournaments in North America. It was planned that military stands with introductory information would be at each LAN tournament, but due to the coronavirus, cooperation was limited only to branding timeouts. These pauses are now called “Air Force Tactical Timeout”, as reported by the announcer and a graphic pop-up on the screen.

This marketing strategy has not been without criticism. Its opponents are reminded of the risks of service and the psychological problems that soldiers experience after returning to civilian life.

“They do not talk about injuries sustained during the service, do not talk about the frequency of suicides. The main argument is: “We can pay for your studies, and you get a chance to serve your country.” When I ask teenagers why they want to join the army, I hear the answer “I want to serve the nation” or “This is how I will solve problems with education.” I think recruiters use these two motives more often than others, ”says Hart Viges, a veteran peace activist and counter-recruiter based in Texas.

But recruiting is a multi-layered thing. Success often lies in creating an emotional bond with the gamer or offering a potential recruit a specific benefit. If a teenager is passionate about games and wants to break into e-sports, he is offered the opportunity to travel to tournaments and a stable salary, which in classic e-sports organizations may not be paid on time.

“Someone might tell you to stay up all night by looking at the screen. We will pay for this. Look what life is like in the uniform of a US Navy soldier, ”says the description of the US Navy’s twitch channel. This is a reference to how sailors at night monitor all indicators of the ship and the environment on monitors. Such comparisons are often found in calls to sign a contract with the US Army and, according to the plans of the military, should erase the border between them and gamers as much as possible.

The army does not know how to communicate normally, cheats with practical jokes and bans for mentioning US war crimes

Many army units have created channels on which soldiers regularly stream shooters and subtly share the delights of army life.

The Nation describes these broadcasts as follows: “The recruiter, usually a man in his thirties, plays Call of Duty or Valorant, uses an American flag with military insignia in the background, and talks about how cool it is to be a military man. Potential recruits hang out with those who play their favorite games and answer chat questions amiably without bothering to find alternative information. “ 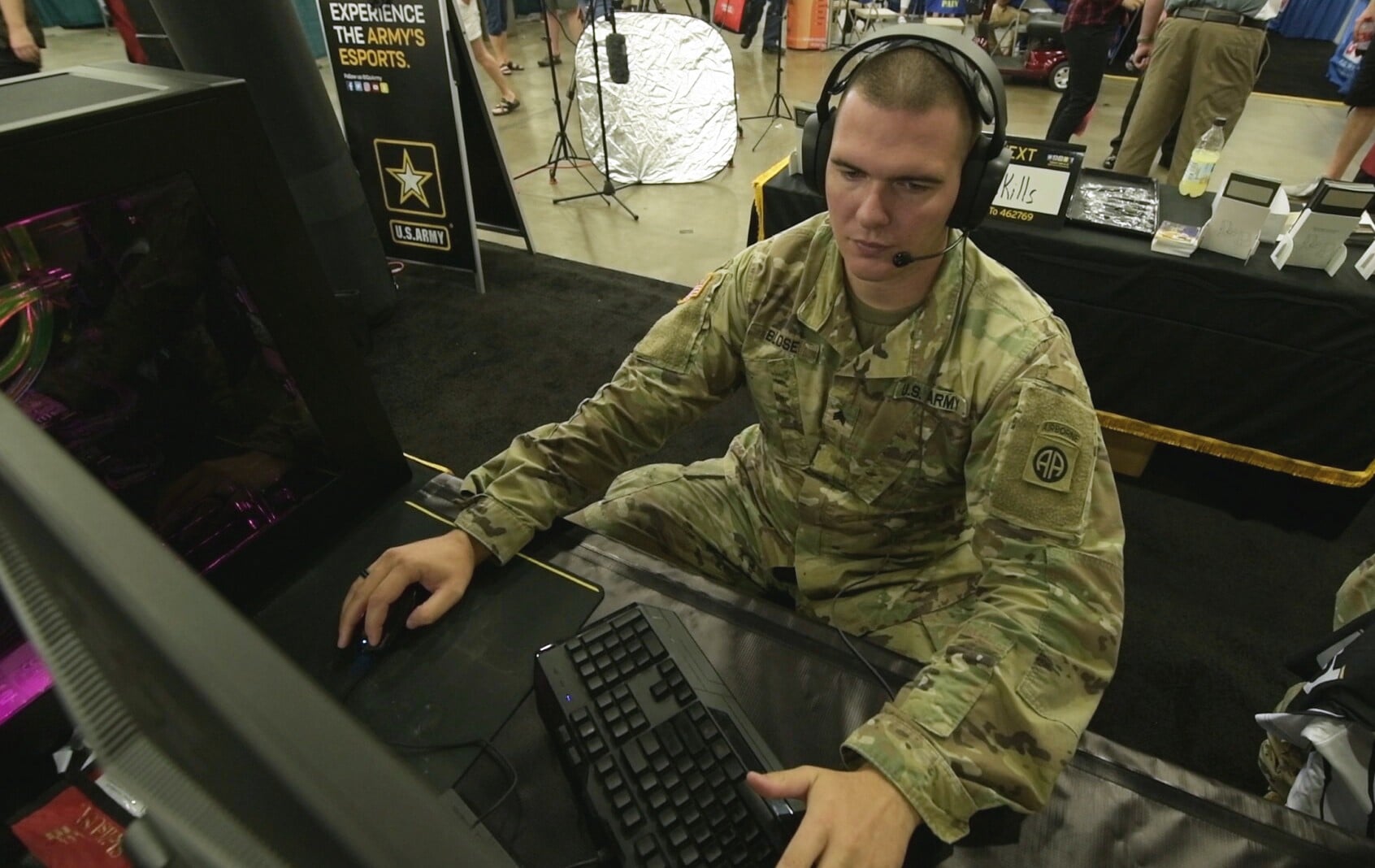 “Twitch is a platform that allows soldiers to share personal stories and associate themselves with civilians. This removes the psychological barriers and prejudices associated with the military in viewers, ”said Christopher Jones, general manager of the US Army esports division.

You can treat such tactics differently, but the army itself often gives rise to ridicule. A recent example is the fake giveaways of the Xbox Elite Series 2 controller, during which viewers were redirected to a recruitment page. Twitch banned fake pranks, but the shoals did not stop there – during the broadcasts, users who wrote about the war crimes of the US Army abroad were massively banned. For example, references to white phosphorus, which is used by American troops for bombing, were cleared.

Any public action by the army aimed at increasing loyalty in the gaming community is met with resistance from some gamers. On July 1, Discord announced plans to make the service more open to non-gaming communities. The US Army Twitter account responded to this message with a “UwU” emoticon. This triggered a wave of attacks on their Discord channel by users who are ambivalent about recruiting the military through video games. They flooded the chat rooms with links to materials about the crimes of the US military, adding “UwU” to them. All these messages were first banned, and then access to the channel was closed for new users.

Despite the controversy, the actions of the army online are producing results. In the first four months of 2020, recruiters received 8,500 applications – 3,500 more than in the same period last year. Against the background of the general plan to recruit 485,000 new recruits, this figure seems insignificant, but most applications usually come in the summer, when teenagers decide on their future after graduation.

The best CS: GO posts are with us

Seb is back, Topson is on the carry! OG never played three lane mid laners – How does it work? – Blogs