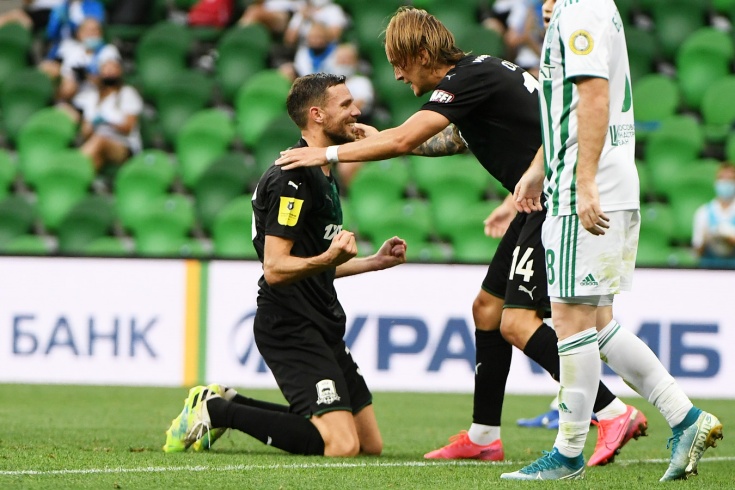 Krasnodar returned their football only in the last round. This was enough for the Champions League

Igor Shalimov could not ruin the season for his former team.

Until recently, we wondered if Krasnodar would be able to get ahead of Lokomotiv in the fight for the second place in the RPL and a direct ticket to the group stage of the Champions League, and before the 30th round the question was different: will the team succeed Murada Musaeva even get into the main European Cup? In order not to lose third place and the right to play in the Champions League qualification, Krasnodar had to defeat Akhmat today. Or hope that CSKA will not beat Tambov at home.

Ironically, Musaev’s predecessor could have left Musaev without the Champions League Igor Shalimov… Of course, for the former head coach of the “bulls” it was a principled match, because Shalimov believed that he was not allowed to finish what he had begun at Krasnodar. Meanwhile, both teams entered the game without the main goalkeepers: the hosts did not have a disqualified for sending off in the last round Matvey Safonovand the guests Evgeniya Gorodova replaced Alexander Melikhov, which first hit the base in the current RPL season.

The first half really turned out to be difficult for Krasnodar. Despite the advantage in possession (60% to 40%) and shots on goal (7: 2, on target – 5: 1), Musaev’s team could not score. It seemed that the rivals would leave for the break when the score was 0: 0, but in the end all the most interesting happened. In the 43rd minute, Krasnodar still took the lead: young Melikhov made a mistake at the exit, and Markus Berg, who was heavily criticized this season, scored the most important goal with his head.

Nevertheless, in stoppage time, Akhmat responded with a goal. Fortunately for Krasnodar, canceled. If in the second half the game had continued with the score 1: 1, the hosts would have gotten nervous. Judge first Vladislav Bezborodov counted the guests’ goal. However, the VAR system made adjustments: it recorded a small offside position in Odise Roshi…

In the second half, Krasnodar got the opportunity to play at speed, and not to run into the wall of Akhmat’s positional defense. Everyone knows perfectly well how the bulls know how to use free space. The second goal was scored after a three-on-two exit (Remy Cabella beautifully threw the ball over Melikhov), the third – as a result of a four-on-four attack.

Finally, the game in Krasnodar lost its intrigue and inner content at the end of the match hour. Berg scored a double, playing, at first glance, dangerous, but in fact within the framework of the rules – Bezborodov scored a goal. By the way, the gross mistake when leaving the defense was made by Denis Glushakov…

The Bulls defeated Akhmat 4: 0 and saved the nearly ruined season. Musaev’s team will have the Champions League, so in the last minutes of the match the fans chanted “Well done!” The top three RPL looks the same as last season – Zenit, Lokomotiv and Krasnodar.

Media: Rubin will not consider proposals for Kvaratskhelia from Russian clubs