Krasnodar had a gray season, but Musaev cannot be fired. Injuries killed the team – SBG-blog – Blogs

Bronze without bright play is a normal result in these conditions.

Krasnodar again did not reach a direct entry into the Champions League group – for the second year in a row, Sergey Galitsky’s club is in third place.

“I am grateful to the guys that before the New Year we were able to score a lot of points, we performed very well. The end of the season was a little off due to the pandemic, like all teams. We dreamed of getting into the top two, but at some points we did not have enough human resources, at some moments we made mistakes – both the players and the coaches. Despite all the difficulties, I am satisfied with the result, although, of course, I wanted more, ”said Murad Musaev after the last match with Akhmat (4: 0).

This season is probably the most difficult in the history of Krasnodar since the arrival of Oleg Kononov, when the team acquired a recognizable style. It all started at the end of the last championship: Charles Cabore and Mauricio Pereira did not renew their contracts (Cabore was not satisfied with the proposed conditions, Pereira wanted to move with his family to a Spanish-speaking country).

The restructuring of the midfield before the Champions League debut is a dubious step, and for the ball carrier and playing through a short pass (there are more throws and crossings under Musaev, but the main principles have remained) Krasnodar has turned into a disaster. At the same time, I don’t even want to blame the club management for the departure of Pereira and Kabore after the fact – the Uruguayan, apparently, really could not be kept, and the client of Dmitry Selyuk sank heavily in a year and was lost with any counterattack of the rival Dynamo (obviously, in Krasnodar he would have to face even more fast breaks).

Krasnodar planned to build a new troika in the center around Gazinsky – Yuri’s descent to the Kabore position was considered back in the winter of 2019 when Chris Olsson was signed. The Swede did not succeed in the first six months (although he often played at the start), Olsson spent a quality month in the fall (remember, for example, the away game with Ural), but only came out on good power this summer (and even then – not always nominally located in the center ).

Therefore, this season Krasnodar entered with two newcomers at the start. “We planned to put two quick insights around Gazinsky – Cabella and Vilhena (or Olsson), which would add dynamics compared to the top three of last year, then football would become even better,” Musaev said in December 2019. 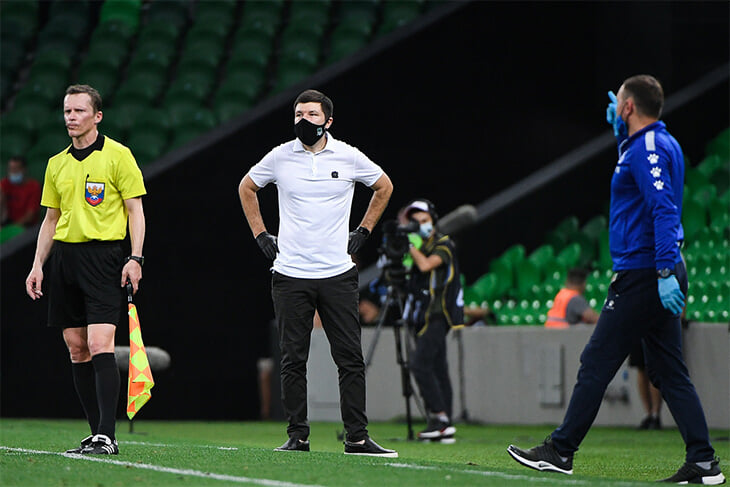 Undoubtedly, a healthy Cabella (the Frenchman broke the crosses in the fifth match for the club) would have added creativity to Krasnodar, but almost the entire transfer campaign in 2019 did not fit into the familiar playing style too much:

– Cabella was the best ball racer in League-1 last season,

– in the same manner acted Namli in the Dutch Championship,

– Villena was unusually a lot for the central midfielders of Krasnodar dumping to the left and hitting from a long distance,

– Kambolov in Rubin is used to playing through medium and long passes,

– Cayo, even in the Portuguese championship, seemed to be a defensive player without high-quality ball promotion

– Berg is a striker, imprisoned under awnings and playing with his back to someone else’s goal, and not running behind defenders.

Perhaps Krasnodar deliberately made such purchases for a variety of games, but back in June Musaev lost Gazinsky (did not play until November due to a shoulder injury) and Klasson (crosses and meniscus, does not play until now) – the leaders of Krasnodar – 2018/19.

With a completely new center of the pitch and without Ari (played only in the first match against Porto) versus Martynovic (missed both matches with Olympiacos), not making it to the Champions League group stage was absolutely logical.

True, Musaev still has questions about the first match with Olympiacos (0: 4) – why did the team go ahead with the score 0: 2, and did not try to keep the score, which left chances for a pass? “It was necessary to calmly finish the match and try to fix everything in Krasnodar. But we played like children, ”Musaev noted in October 2019. 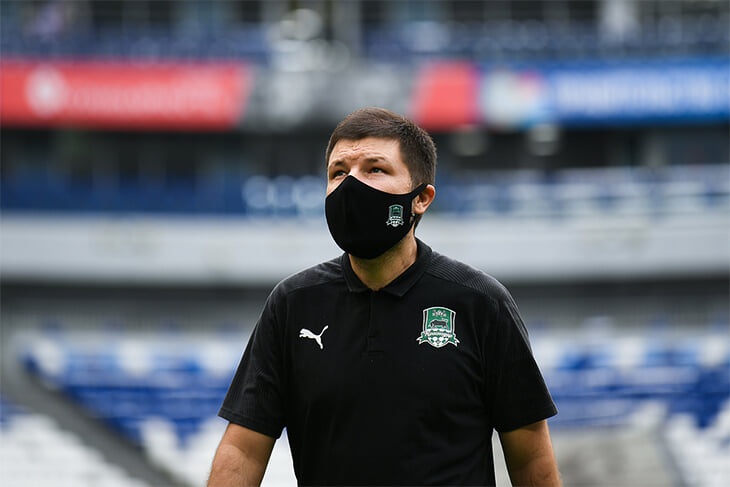 Even in the new formation, Krasnodar remained the most owning RPL team (as a result – 60.4%, it was more only in the 2016/17 and 2018/19 seasons – 60.9%) and came second to the winter break. Musaev’s team noticeably lost in brightness (one can distinguish the September matches with Ural and Krylya Sovetov), ​​Zenit broke away by ten points, and the gap between the second and fifth places was one, but according to the results of Krasnodar in the league seriously sagged, really failing only in the Europa League.

In winter, Krasnodar had a new trouble – all the central defenders dropped out. Spaiich underwent an unsuccessful ankle operation (does not play until now), Martynovich was injured in a friendly match (missed two spring rounds), and Fjoluson was also injured (the club did not disclose details).

So Musaev had to translate in defense of Kayo – while the club recognizes this experiment as successful. In terms of speed, fighting (including the top), Kayo really has almost no complaints, but there is not much progress in the quality of the pass (especially in the position of the left central defender).

After the restart of the season – new problems. Until the end of the championship, Ari and Stotskiy were eliminated – as a result, in the match with Rubin, which Petrov missed due to disqualification, Martynovich came out on the right in defense.

Krasnodar lost their chances of a direct hit in the Champions League in the 29th round with Dynamo (0: 2) – Wanderson, Kayo did not play in this game (both because of the temperature, both played in the 30th round) and Villena (due to accumulation of blood in the muscles).

There is nothing surprising that this season in all respects came out weaker than the past. 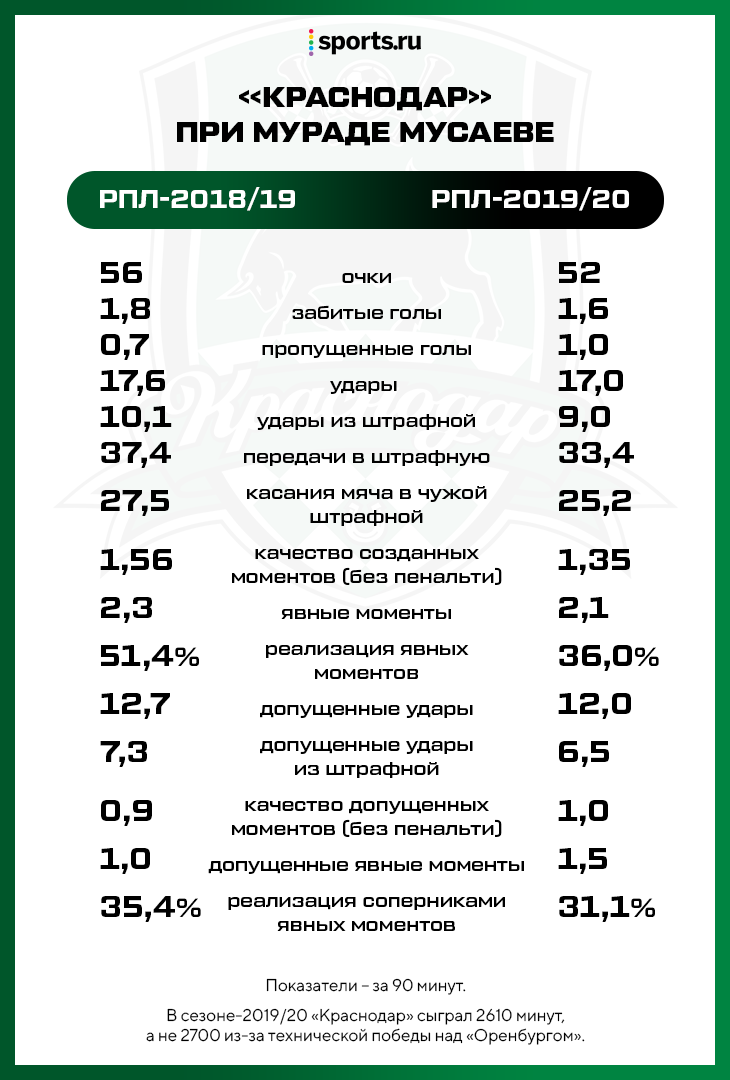 Of course, there are questions about Musaev’s work (from the latter – why did not he switch to a system with three central defenders in a positional attack against Rubin, in which Martynovich would not have to connect before someone else’s penalty area), but globally, Krasnodar’s style was broken by endless injuries ( plus a not very clear transfer campaign).

Not once during a season could Musaev use all the best players at the start – in such conditions, the dismissal of the coach for the third place seems unreasonable even against the background of frustration from another missed direct ticket to the Champions League group.

Bronze, albeit without a consistently bright game, is a normal result for a transitional year. 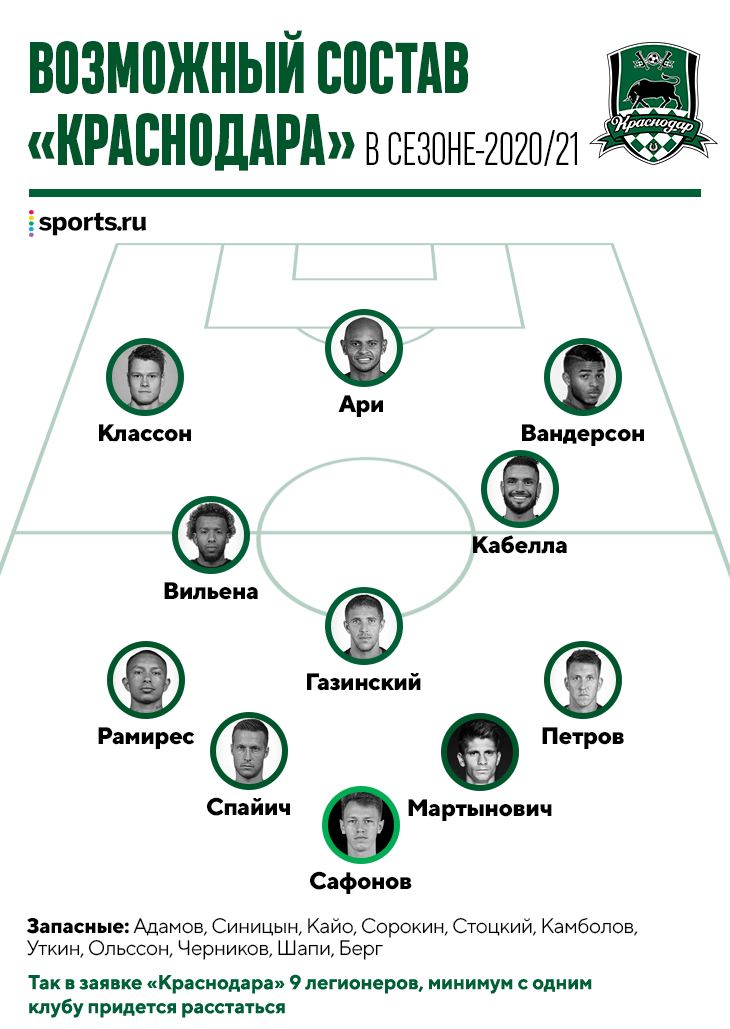