Manchester United have left Leicester without the Champions League. Heads of clubs cursed in an empty stadium, Maddison almost jerked to a referee on crutches – London Eye – Blogs

In recent weeks Leicester has been the saddest city in England.

• There is still an increased epidemiological situation, so the city (the only one in England) still lives by the rules of a strict lockdown: shops, cafes and pubs are closed, there are almost no people in the center, and masks are asked to be worn even on the street.

But the asphalt is painted with cute 2-meter markings: the tiger is the symbol of the local rugby team, the fox is the football one. 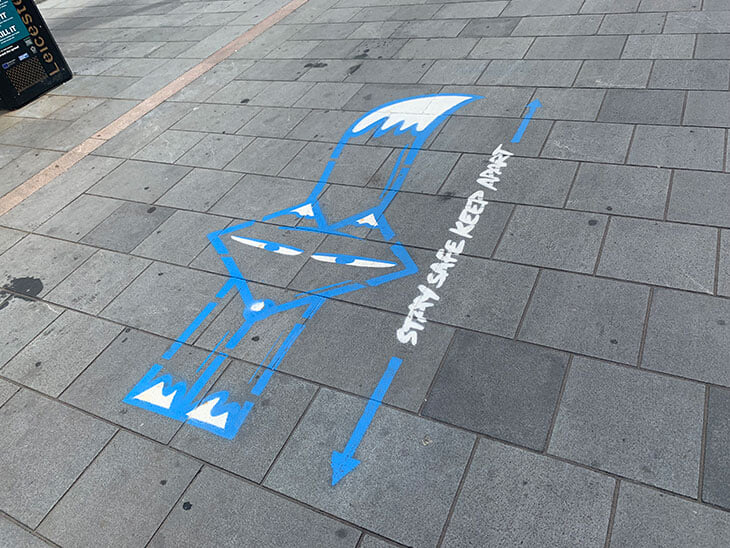 • A few weeks ago, the local rock group Kasabian, known to all fans of the Premier League and FIFA games, announced the breakup (in fact – parting with soloist Tom Meighan).

• And soccer Leicester, which had a 14-point lead in the top 4 back in the winter, had such a bad second half of the season and especially after the resumption of the season that they were outside of the league quota for the final match for the first time since September.

Why this happened with Brendan Rogers’ team, explains Vadim Lukomsky.

In fact, nothing uniquely bad in terms of the quality of play against Leicester has happened since the quarantine. The decline only continued, which started from the beginning of the year. Although before the resumption of the season, it seemed that their position was too comfortable and even this kind of football would be enough to reach a place in the Champions League. 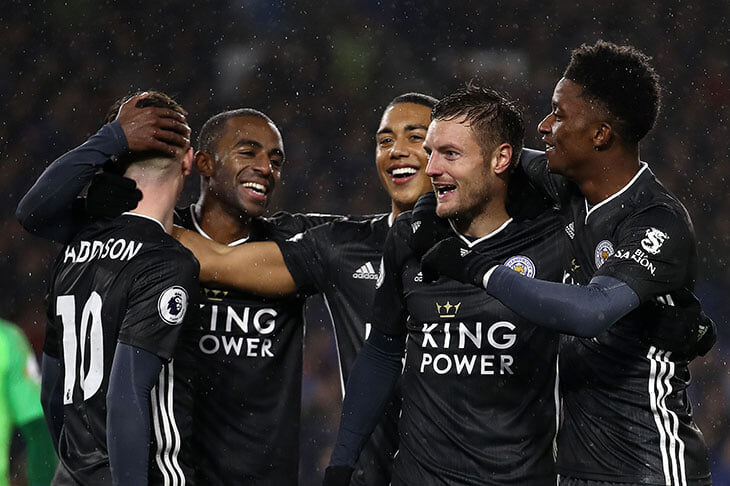 For me, it is reasonable to split the situation into two questions: 1) why is Leicester noticeably worse after the New Year? 2) how did Leicester manage to give up 8 points away from 4th place (that is how many were for the resumption)?

The first question is really difficult. Such a big difference is always a combination of factors. But almost all problems one way or another run into the center of the field. The first circle was completed with a permanent and magically stable triangle Ndidi-Tielemans-Maddison. There was a clear division between them: Ndidi – destruction, Tielemans – control and advancement, Maddison – freedom and creation. Each of them is top in these profile qualities. The system not only suited everyone, but also helped Leicester switch modes right during the match.

In the second part of the season, there has always been a situation in which at least one of them is either unwell or in terrible shape. Leicester managed the matches much worse – they could not switch modes, as in the first part of the season. It is significant that in search of an impulse for the ending, Rogers came up with a 3-4-1-2 formation, where not even the whole three have a place on the field. 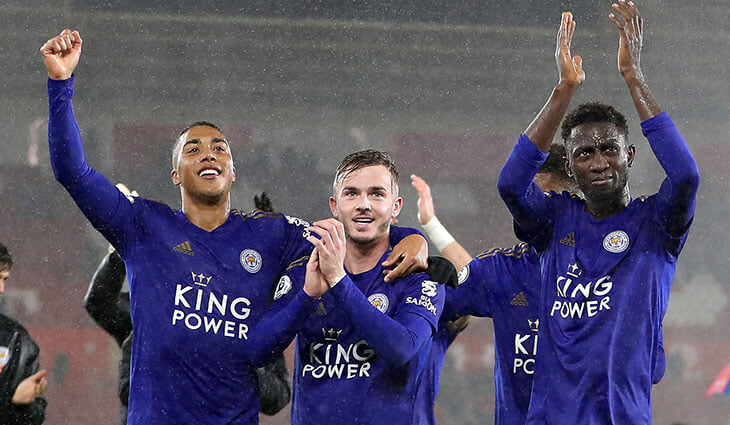 But none of the options tested provided the same balance. As the most influential person in Brendan Rogers’ career said, “The problem with coaching is that you have to try to build a plane that is already flying.”

In general, Leicester in the first part of the season is a well-played and mature pressure machine that perfectly manages matches through ball control, raising the pace at the right time. Leicester in the second half of the season are still a pressure machine, but less played, and instead of maturity and match management, the coach’s desperate attempts to find a scheme that will be convenient for the players who are in shape.

This brings us to the second question – why did they fly so far. In principle, there is a great temptation to answer “Well, they just fell down” and point out the reasons above, but this is not entirely true. Leicester was worse, but not as bad as it seems from the results. Abnormal bad luck played against the team in the final segment.

For example, with “Bournemouth” the team played clearly better before the turbidity at Chaglar Seyuncu – the result was 1: 4. They ended with Tottenham with a 24: 7 striking ratio in favor of Leicester (and there were enough dangerous ones), but the performance of Hugo Lloris and the realization of Harry Kane gave 0: 3 on the scoreboard. There were too many such severe punishments. 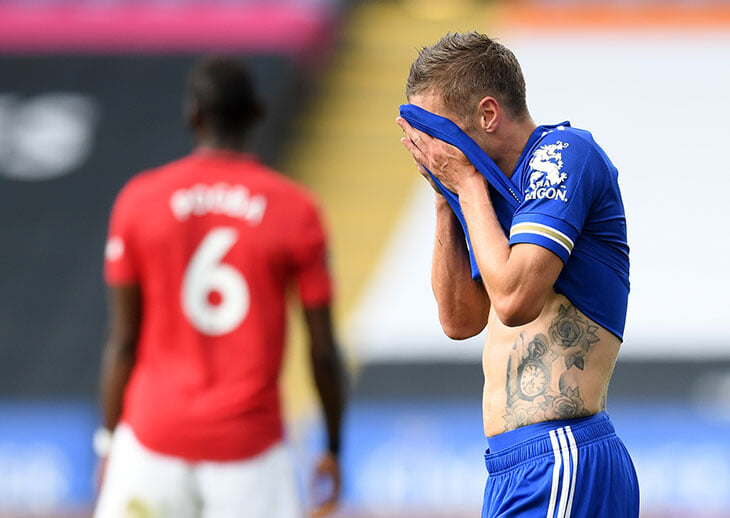 On the way out, the picture is as follows: Leicester did not keep the high bar in the second part of the season, but the level to which they slipped is not at all the bottom. With such a margin, he could and should have been enough, but at the decisive moment there was no luck at all.

Before the last round, the radio hosts in the King Power press box were sorting through the tournament layouts. For Leicester, everything was pretty obvious: a victory over Manchester United would lead directly to the Champions League, a draw made them look back at a parallel match in London and hope that Chelsea would lose to Wolves.

At the edge of the pitch, a meeting of referees and team captains was taking place at that moment (a mandatory procedure in the coronavirus era). Wes Morgan and Harry Maguire spent an extra five minutes talking. At the beginning of the season, it seemed that this final round match would be special, but then the only intrigue was Maguire’s return to Leicester, and not a direct fight for the top 4. 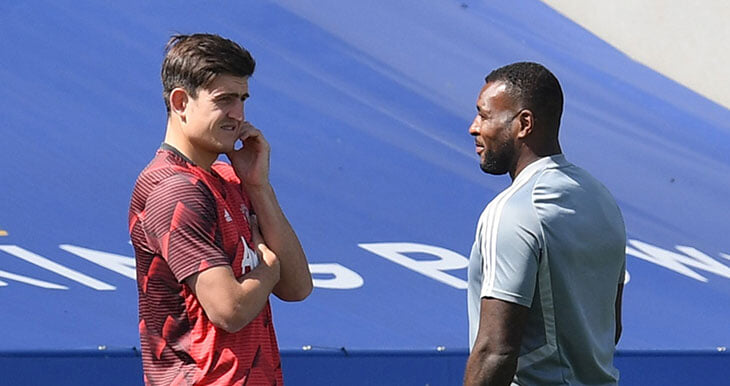 Next to the press box were Chilwell, Pereira, Maddison, Fuchs and Seyunju. The injured four and the disqualified Turk took the podium a minute before the starting whistle and appeared to be in the locker room with the rest of the team in pre-match setup. 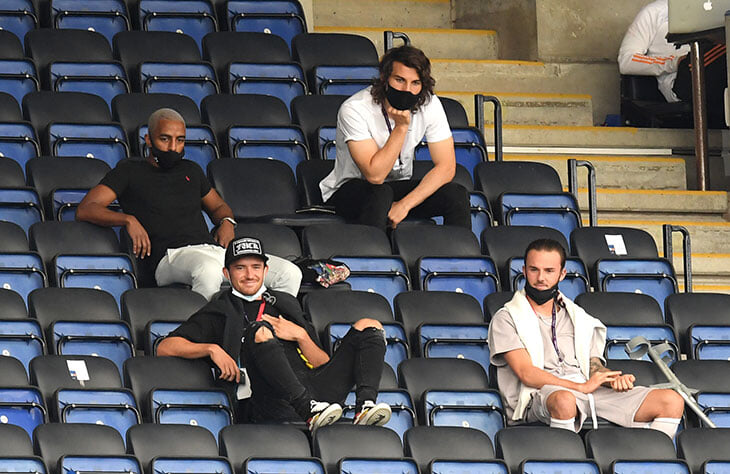 On a tier below, the management of the clubs stood to greet the teams entering the field. The applause in the empty stadium sounded strange, but it was the bench, the club representatives and the injured players that created the minimal feeling of a home match for Leicester. I was in 7 championship matches after the resumption, and in no other indoor stadium did every action receive such a violent reaction from a couple of dozen people in the stands.

James Maddison reacted brightest to what was happening on the field. With the starting whistle, he loudly barked “Come on!” But the main ovation was won by young Thomas, who in one of the episodes threw Bruna Fernandes over the edge.

At the end of the first half, a loud comment from one of the journalists swept through the stadium that Chelsea had taken the lead in London, and Chilwell, sitting next to him, grimaced in annoyance as he went into the booth for a break.

In an empty stadium, emotions are not felt so clearly, but according to my feelings, the last time so nervous at King Power was three years ago, when Leicester beat Sevilla and came out in 1/4 of the Champions League. The beginning of the second half hung in the air with such tension that the BBC Leicester reporter sitting next to me began to swing in a Slutsky-style chair and apologize to the editor for unconsciously muttering “come on boys” into the microphone.

The penalty kicked by Fernandes inflamed the already restless nerves so much that a fight almost broke out in the presidential box. All the same men in suits from the management in the clubs quarreled for a minute and even got to their feet, so they had to be seated by their colleagues. At the same time, Maddison and Chilwell were ready to run down the podium and attack the judge: a synchronized shout “this is a damn corner!” after hitting Gray, he probably flew to Martin Atkinson, who indicated a goal kick.

“We must keep believing, keep pressing!” – for the resumption of the championship, I heard a lot of prompts from the players, but the cry of Schmeichel, breaking his voice 5 minutes before the end, will remain the most piercing memory of this strange season. With the final whistle, the goalkeeper threw off his gloves right in the goalkeeper’s room and, together with the rest of the killed team, wandered into the podtribunka. 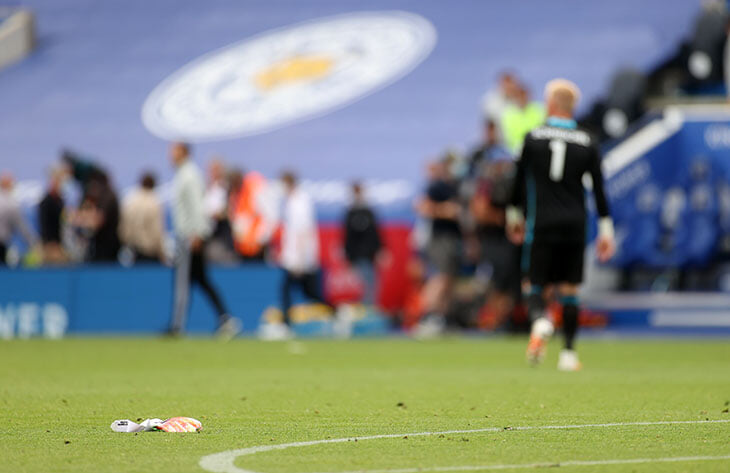 Even more lost were the traumatized, who did not leave the podium for several minutes. The last in place was James Maddison, who was clutching his head: he went down only 15 minutes later, when Jamie Vardy was handed the Golden Boot, and only then the crutches became visible (James had an operation on the thigh tendon). 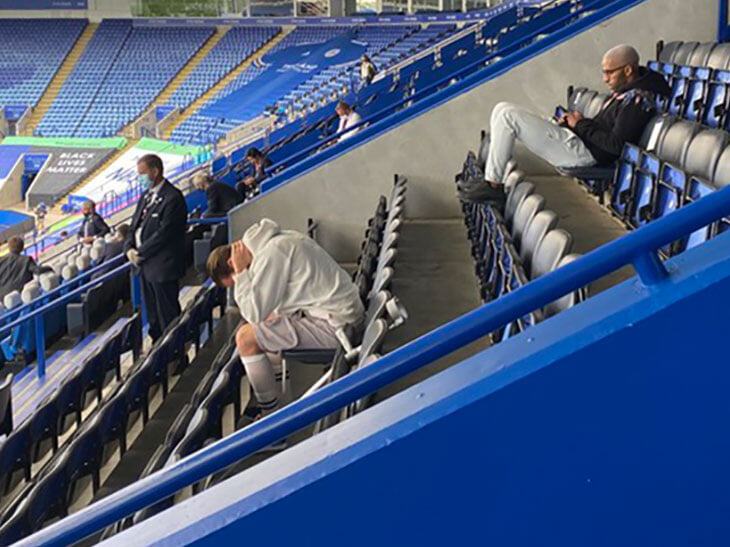 In recent weeks, fans have accused Leicester of insufficient dedication. The final match of the season was not a success in terms of result, but the Premier League has not seen such a leap forward and sometimes literally tearing off its legs (Evans, sorry) since last fall.

This fall the club will play in the Europa League. The rage of the injured five can finally manifest itself on the field.