Milan and Atalanta approached the match like the two strongest Italian teams after the quarantine – 2 draws each and wins in the rest of the meetings. Highest scoring and best goal difference appended.

This sign had everything except the obvious tournament motivation (although formally Atalanta retained a scanty chance for a championship). Finished 1: 1: no extravaganza, but the rhythm and quality of the football were high. All tactical expectations were met.

1. Milan had three significant deviations from the first line-up. All forced and read before the match. Alessio Romagnoli and Theo Hernandez were injured and Ismael Bennasser was suspended. Their stunt doubles are Matteo Gabbia, Diego Laxalt and Lucas Biglia. The scheme has not changed.

2. “Atalanta” could not count on Josip Ilicic (this made Ruslan Malinovsky’s getting into the start even more confident, although in this form he can claim a place even with full competition).

Another loss is Jose Luis Palomino. He was slightly injured in the match against Bologna. He got into the application, but Mattia Caldara came out in his place at the start. 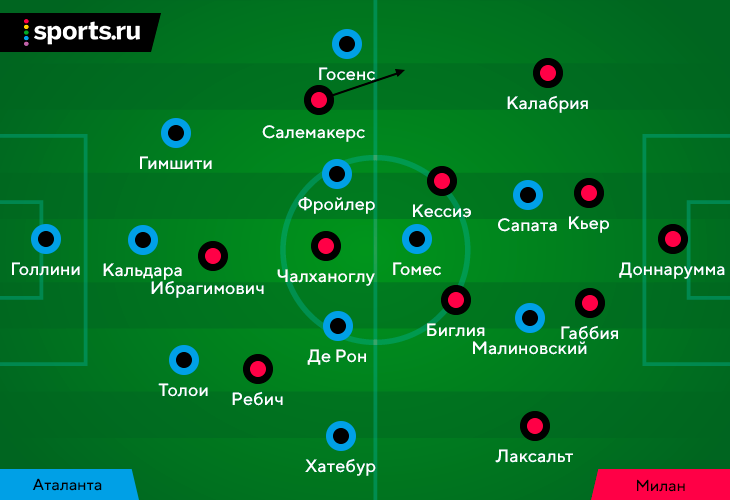 3. The match was divided into 4 significant stages.

First 15 minutes: Milan tried to attack with a short pass, but only put themselves under pressure from Atalanta. The segment ended abruptly with a free-kick by Hakan Chalhanoglu – it was the hosts’ first kick towards the goal, but the Turk’s skill helped the team in a difficult moment.

A short stretch right after the Milan goal: Pioli’s team adapted, simplified the game, Atalanta was slightly shocked after conceding a goal.

End of the first half: Milan were no longer substituted, but Atalanta regained their territory and deservedly put the squeeze on.

Second half: Milan found a method of playing against Atalanta’s pressure (through long-range passes to Zlatan Ibrahimovic) – and used it with frightening radicalism. This did not lead to a hail of chances (but the pair was created in this way), but deprived Atalanta of the usual game pattern. More closed in both directions, but equal time.

4. Personal pressing “Atalanta” – a puzzle for any opponent… Gian Piero Gasperini’s team is perfectly trained in this system and famously adapts the principles to any opponent’s scheme.

There was a classic at the beginning of the match. All options in the center overlap personally and very tightly. The flank players get freedom, but only formal – until they get a pass, Atalanta’s laterals will have time to cover: 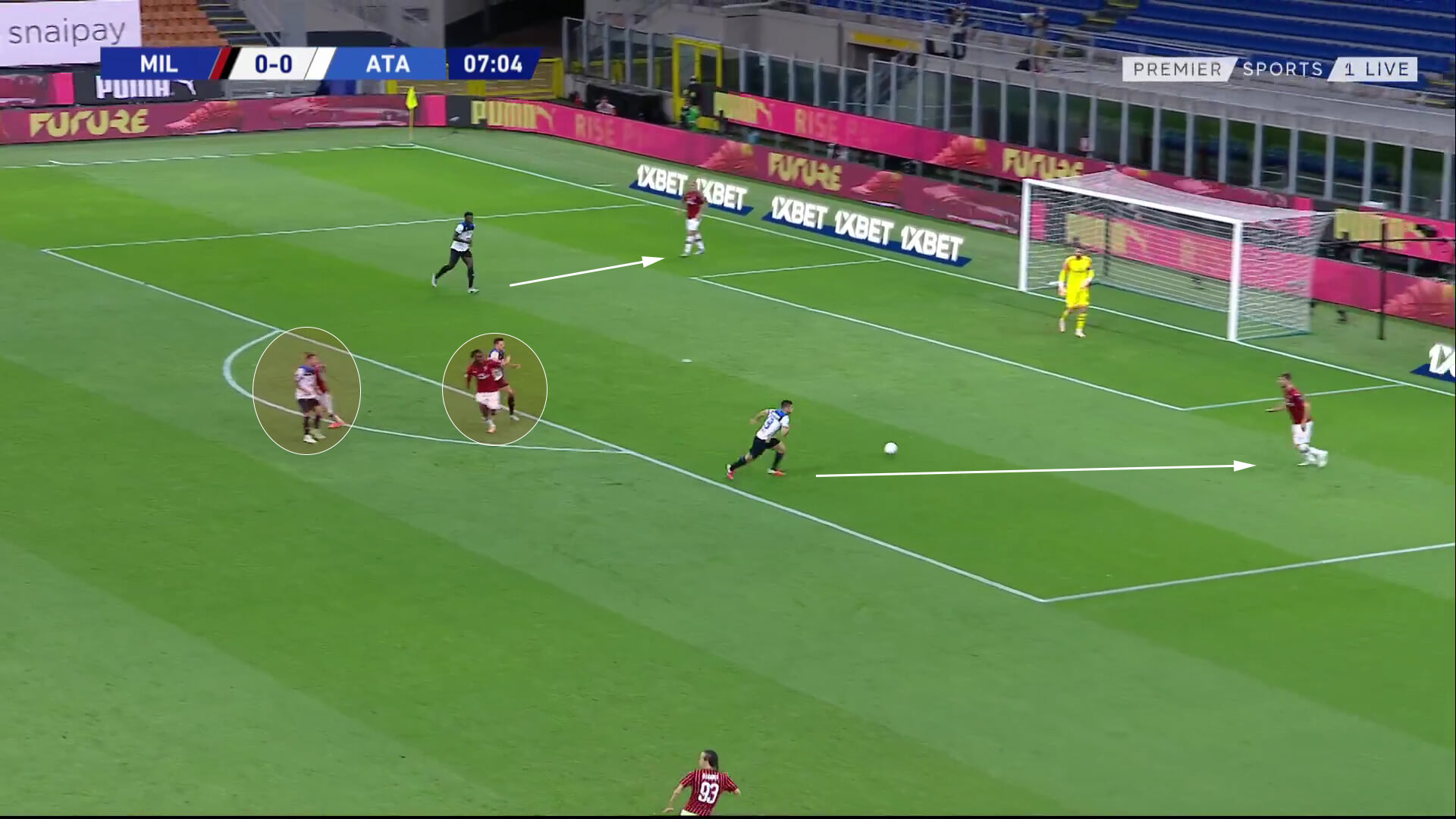 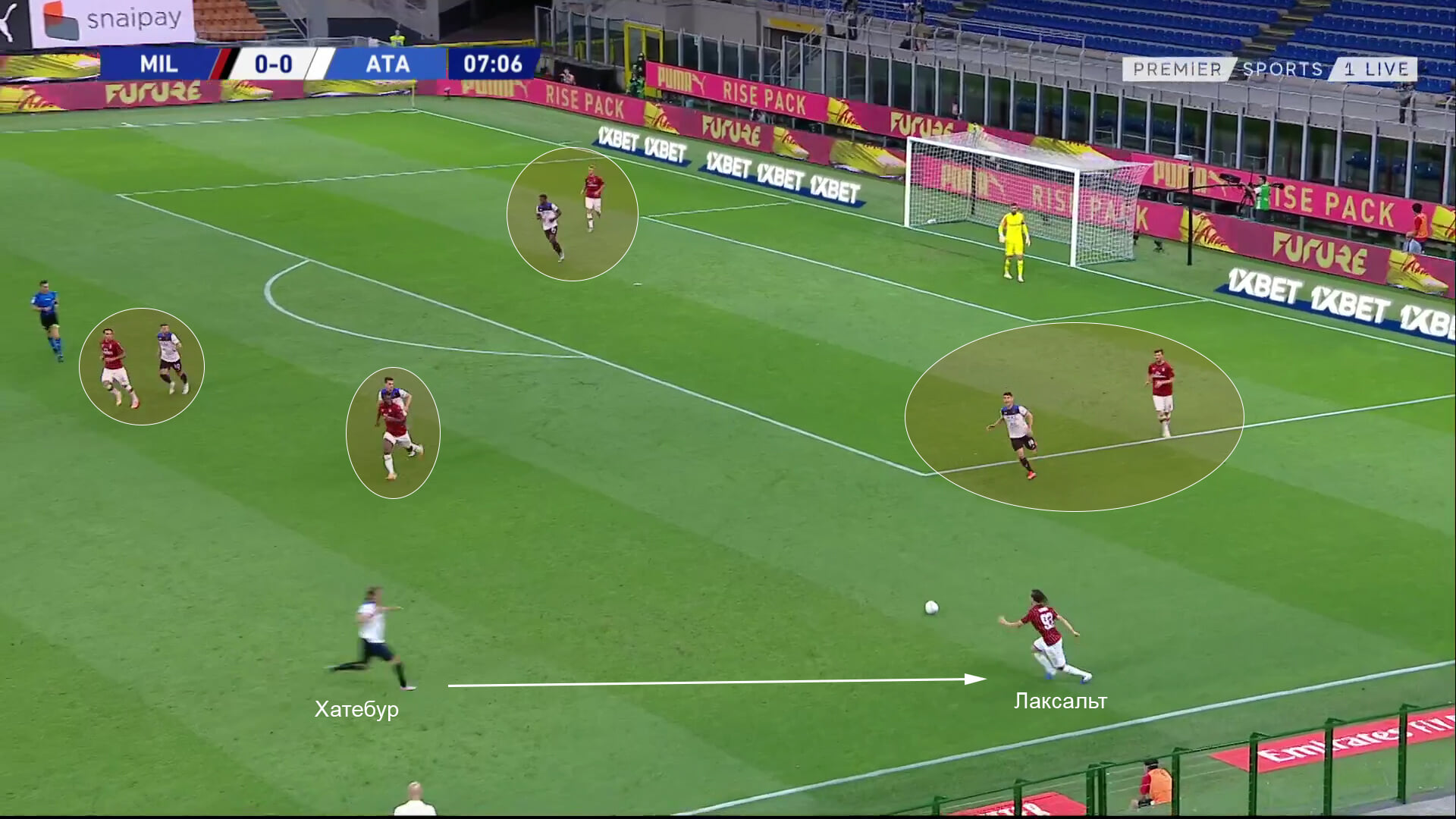 With the proper intensity (and Atalanta has no problems with it), such pressure is almost impossible to break into short passes. That is why the Atalanta is one of the best pressing machines in the world.

five. At the starting stage, Milan was frankly lost under pressure – either losses or unaddressed removals. But they tried some methods of adaptation to pressure.

The first move (frequent with Pioli) – Calabria’s right-back is deeper, while Laxalt’s left goes higher. In this situation, Calabria sometimes simply remained as an additional option on the flank, sometimes, according to the situation, became the third central defender.

This move made sense. Gosens played with Calabria in a typical personal pressure scheme, but Calabria’s position was too deep, going so high was risky for the lateral. But Atalanta adapted – Papa Gomez just started playing with Calabria, the defensive players were promoted higher: 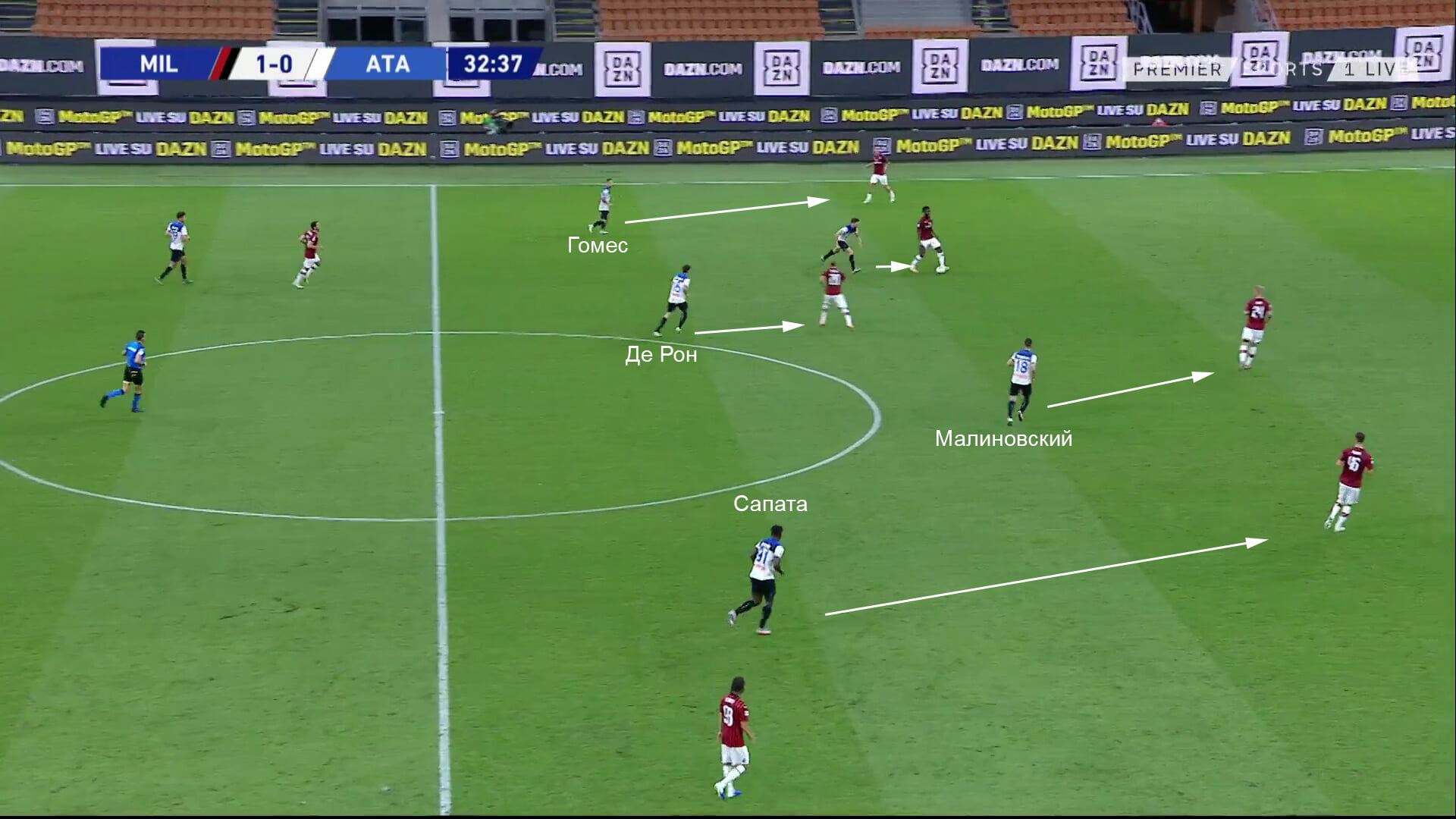 6. This method was not particularly effective. I could have confused the personal pressure of a less well-played team, but Atalanta has been playing this system for a long time and reacted quickly.

But the second way of playing against pressure turned out to be a tactical jackpot, because it ideally suited the qualities of Milan’s players and was as inconvenient as possible for Atalanta.

Personal pressure assumes a high intensity and density of play with each opponent, but almost always leaves the goalkeeper free: 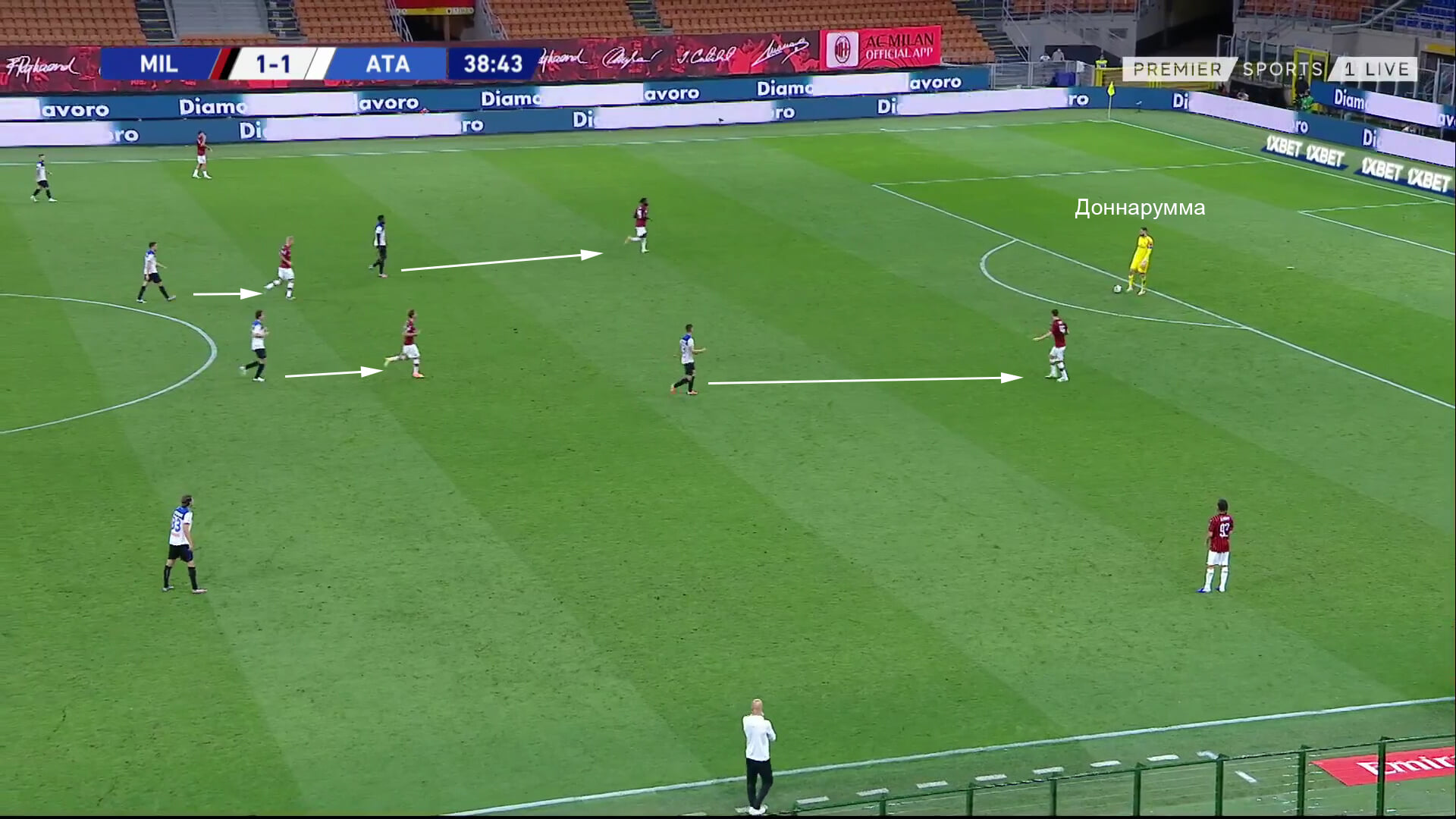 Milan simplified the game and reduced it to the Donnarumma-Ibrahimovic route… The effectiveness of such episodes was frighteningly high. Of course, the individual qualities of the players are primary here, but Milan also prepared comfortable conditions.

For example, it was important not to endure at once, but to make several passes in order to lure the Atalanta players higher. This enticement gave Milan more space in the area where the ball was heading and more chances for rebounds. Pioli’s team played simply but intelligently.

7. Ibra, who was the main addressee of the casts, acquired a key role in this drawing of the game. Since even in such episodes “Atalanta” retained its personal orientation, we have formed a constant duel between Ibrahimovic and Kaldara. It is an understatement to say that Zlatan dominated here – the Swede simply tore his opponent apart and was by far the most useful player on the field (at least when his team was in possession of the ball).

Ibrahimovic won 14 riding duels. The second indicator in the match is 4. As a percentage, this is 88% of all riding duels. With a large volume for an attacking player, even 60% is considered good. 88% is just space. At the same time, there were episodes when Zlatan made a guardian, even without a horse fight, taking the ball on the chest and throwing it off to partners.

In specific conditions (personal pressure of “Atalanta”, Donnarumma’s ability to knock the ball far enough and accurately, the presence of an obvious vulnerable link in the opponent’s defense) Ibra has become a real tactical superweapon. Everything went through him.

To complete the picture on Caldara: he is not the main one (Palomino comes out when he is healthy), went through very severe injuries, returned to Atalanta only in winter, while he does not understand the system well, he made a lot of mistakes in other matches after the quarantine. This is just the context and explanations that do not negate the fact that we saw one of the most one-sided duels of this season.

8. Milan gradually neutralized Atalanta’s pressure and even began to extract their own moments from the game through the Ibra. But the positional attacks of Gasperini’s team are no less dangerous. Here Pioli also had a blank. 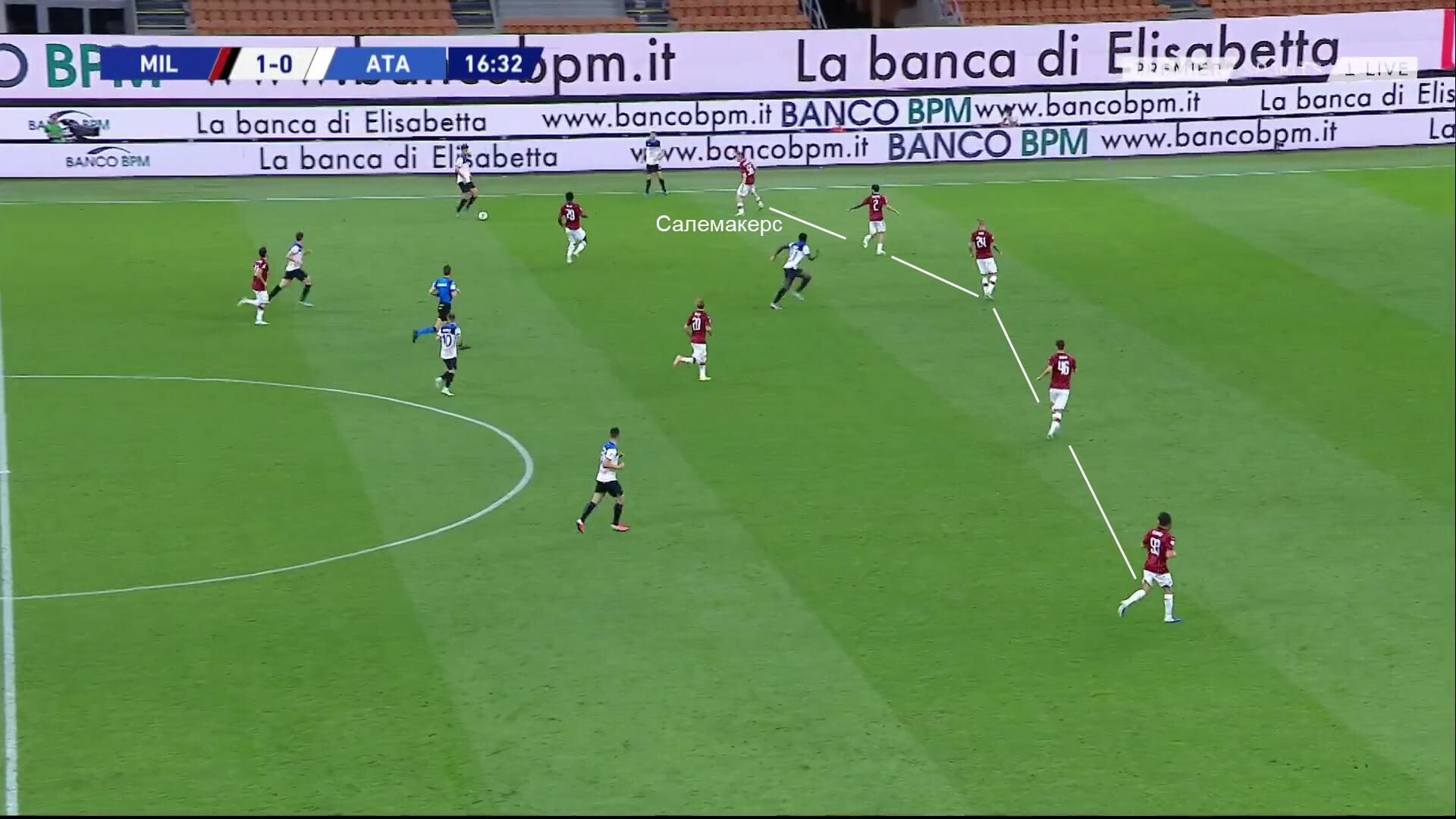 On the other flank, Rebić deliberately remained in a higher position. Only with a very protracted defense did he play against Hans Hatebur.

This asymmetry gave Rebić an advantageous position for quick attacks. Atalanta did not bring chances for counterattacks very often, but the Croat used his freedom effectively. In particular, he earned a free kick and put Rafa Toloya on yellow, which served as one of the motives for his replacement during the break.

nine. Salemakers’ defensive role helped with another tactical aspect. The situational five meant that it was easier for the center-backs to advance behind Malinovsky and Zapata. Gabbia and Kier almost personally played with the Atalanta strikers (yes, Ruslan sank deeply, but he started as a forward, not a midfielder).

Gabbia’s nominations for Malinowski were risky and far from obvious: 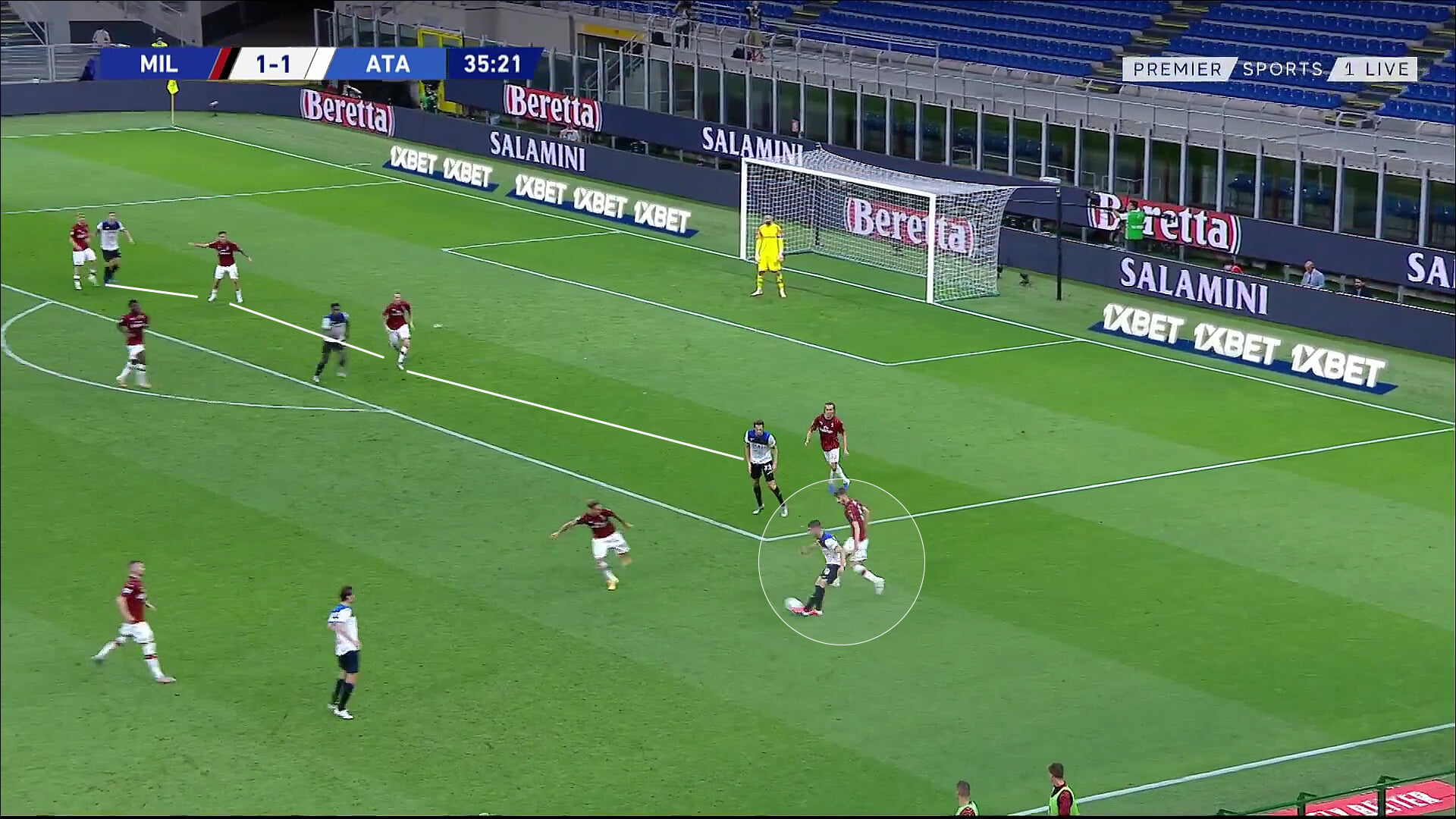 But Milan’s line of defense almost never collapsed. Calabria could become a center-back, with Salemakers covering the right flank.

ten. Gradually, Milan turned off the traditional strengths of Atalanta (both pressure and positioning). But Gasperini’s squad is full of smart football players who read matches and adapt.

Papu Gomez and Remo Freuler played this role yesterday. Due to the deep position of Salemakers, a convenient point arose on his flank to receive the ball – you can calmly turn around and even accelerate: 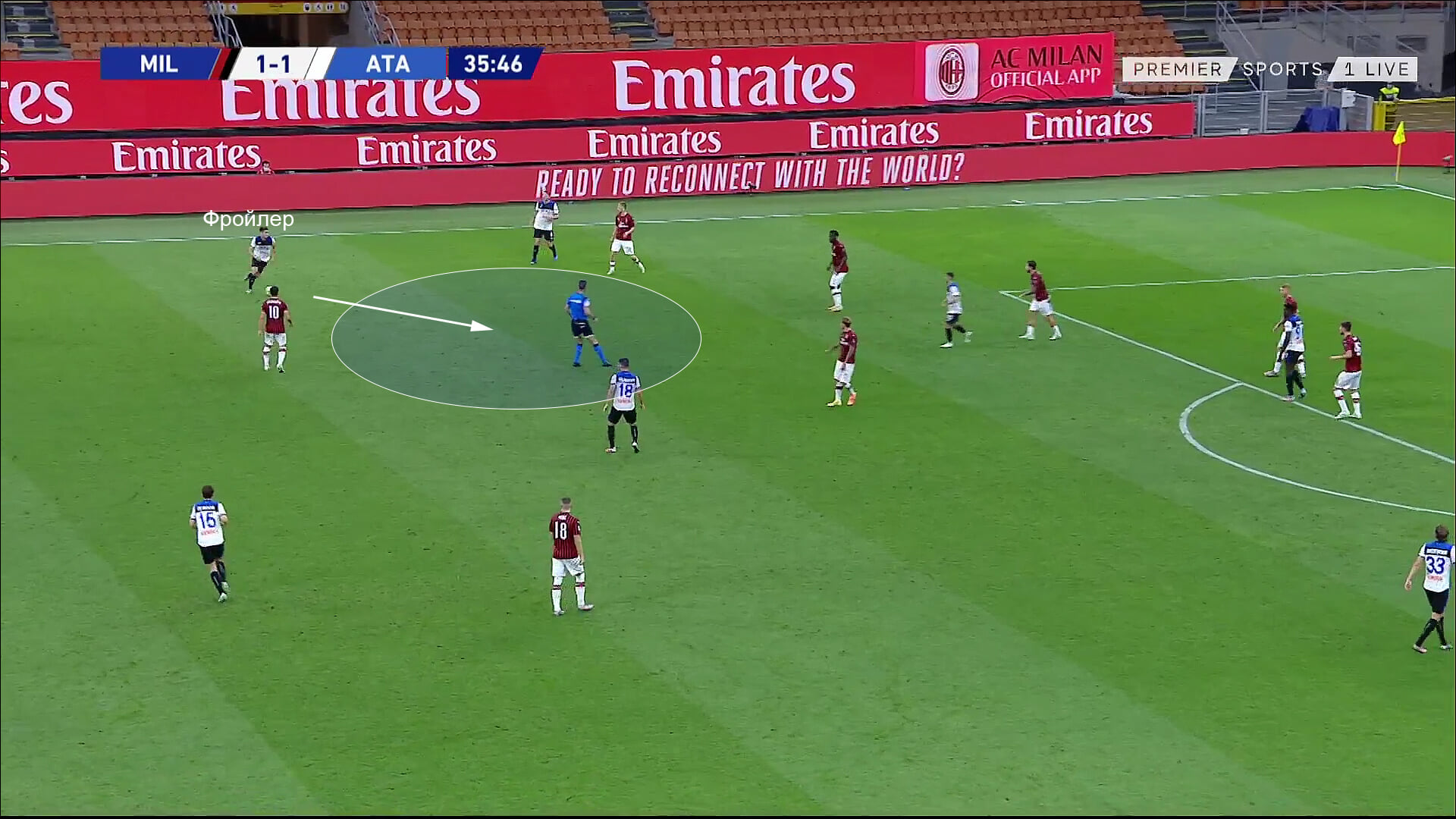 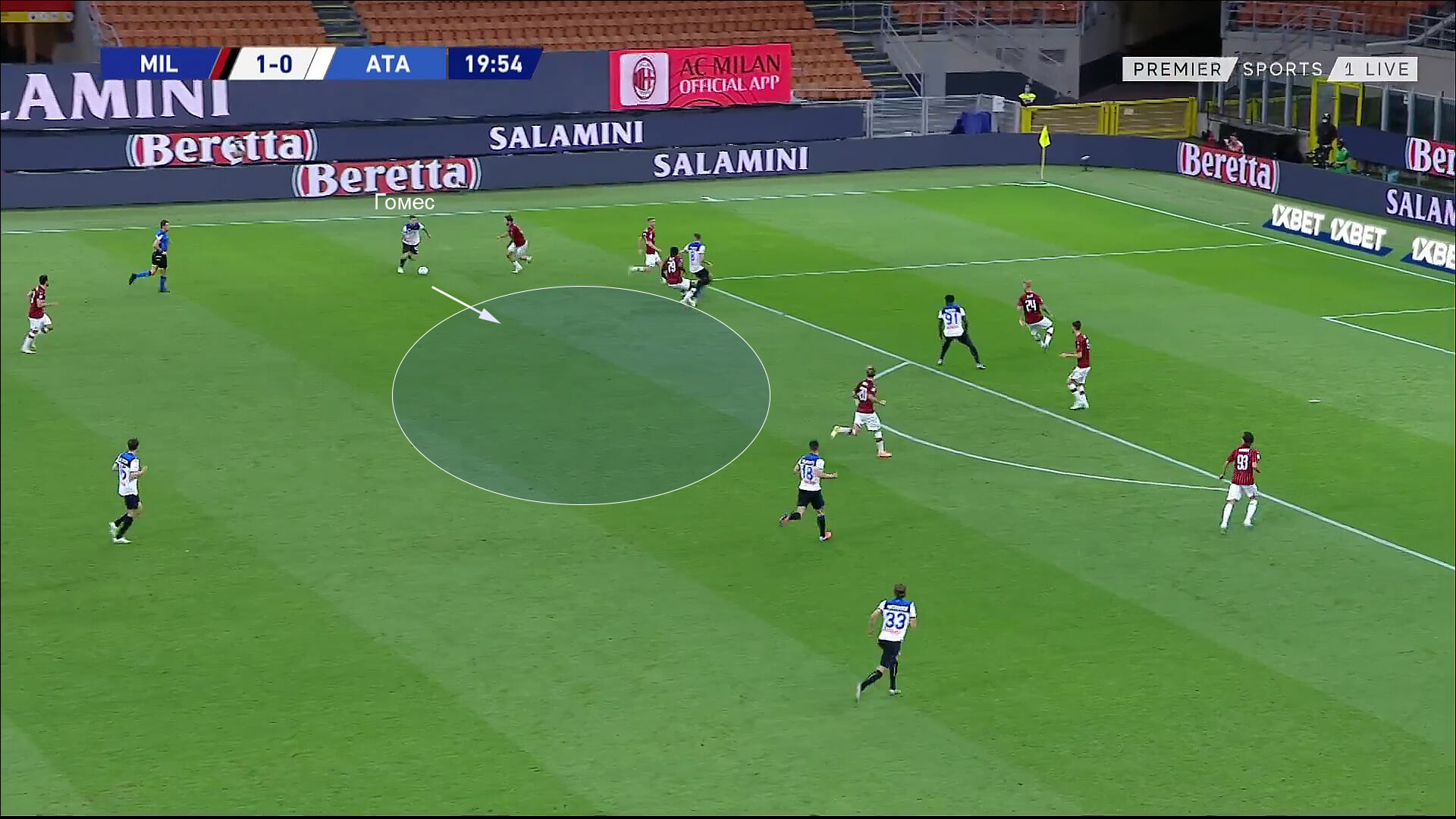 Papu Gomez’s actions were clearly skewed towards this more free zone. Freuler also used this technique (even if he is not so dangerous when creating). Here is the cumulative heatmap of the two players – the emphasis is clearly visible: 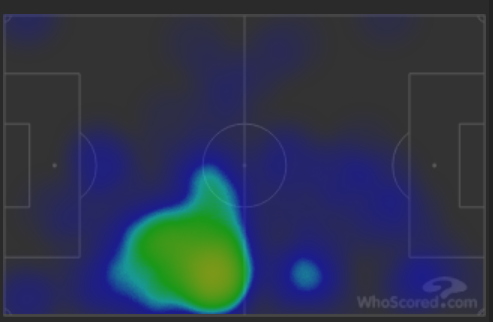 Thus, it was possible to create some spice. But, of course, the mechanisms invented by specific players on the move were not really well-oiled.

eleven. Of everything we love about Atalanta, there is still counterpressing. Gasperini’s team really reacted powerfully to the loss of the ball and immediately covered Milan. This is how the scoring attack and a few more episodes were born.

Milan failed to neutralize this strong side. But due to good play in other aspects, there were fewer counterpressing episodes than in a typical Atalanta match.

12. A personal praise point for Zlatan!

The Swede’s form after his return is characterized by a high level of instability – even within the framework of individual matches. He is monstrously good inside the box, but he lacks the strength to work without the ball, his selfishness often ruins attacks, he lacks tactical discipline when Milan play the ball.

Usually Zlatan’s assessments boil down to effective actions. If they are, then the benefits outweighed the disadvantages. If not, then his game turns out to be too unstable and sometimes even hurts the team.

Yesterday’s match is an exception. The drawing of the match ideally suited his strengths, he did absolutely everything, he did not score or give up, but dominated almost all 90 minutes. Bonus to the won duels in the attack was the use of the set in their own penalty area.

13. Milan captain Gianluigi Donnarumma, 21, caught up with Marco van Basten and Frank Ryckard in the number of games for the club yesterday. A powerful achievement that is hard to believe. The match itself turned out to be very powerful. He hit a penalty kick – the main one in a string of impressive rescues. 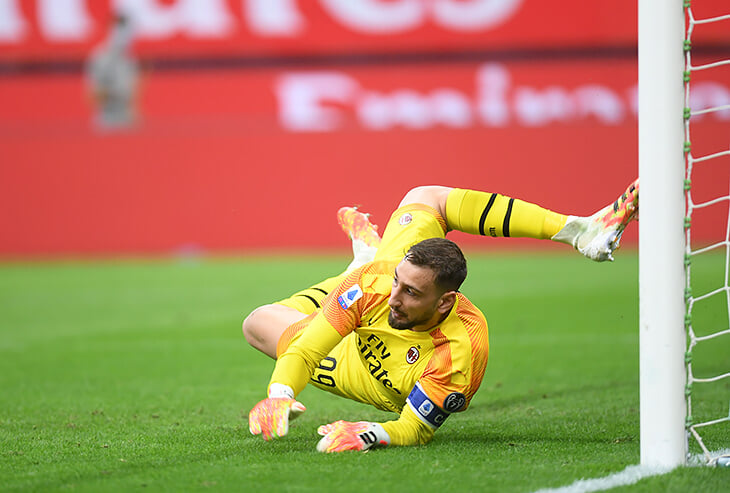 Also, the importance of Donnarumma’s passes in a simple but effective combination with Ibrahimovic cannot be underestimated. Of the 27 long-range gears, 20 were accurate. Milan played almost no short pass, but the goalkeeper’s overall passing accuracy remained at 81% – higher than any Milan defender. This is a common achievement with Ibra, but the quality of long-range passes was high.

fourteen. Lucas Biglia replaced Bennasser. The Argentinian is out of order and completely failed… Absolutely unnecessary rudeness in a penalty shootout, a fatal loss in an episode with a goal – the personification of problems. There were a lot of similar minor flaws.

15. This match pretty well represents Milan at Pioli. The main quality is flexibility…

They are not chained to a specific style – they deliberately test their opponents using different methods. For example, short rallies in the first minutes at Milan are always practiced. Then the team either gains control (if the opponent is bad at pressing), or changes strategy. And so with almost every element. Everywhere Pioli found more than one mechanism that suits the qualities of the players.

As the coach gets to know the team, the number of techniques in each stage increases. The latest results are backed up by quality play. Milan are already a great adaptive team. The next step is to learn to play on your own, even in such difficult matches. Still, the progress that can be made with adaptive football is limited. 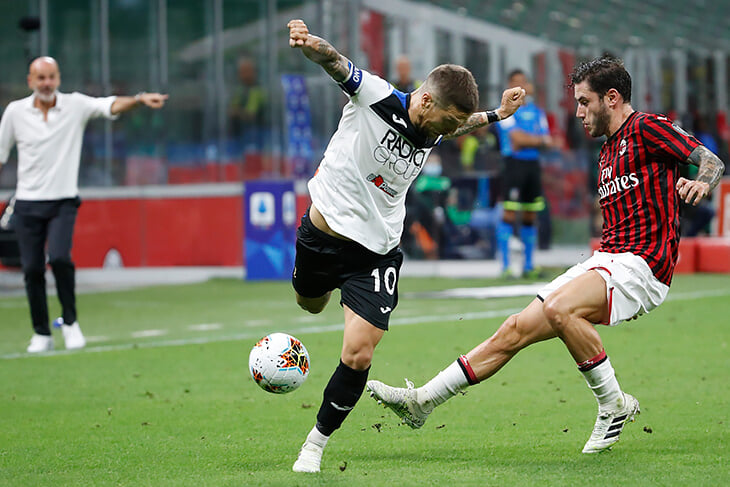 The answers are “no” and “rather yes”. Milan gave up territory and greatly simplified the rallies (both are clearly not the first game), but played a quality match. Important: the optimal recipe was born from adaptations right during the meeting. A good result for Milan, which did without three important players.

the date of the

Circular returned to Zenit. The lease term in “Ufa” has expired