Last summer, the Eredivisie and Ajax Amsterdam simultaneously left Matthijs de Ligt and Frankie de Jong, the rising stars of Dutch and world football. At the end of January 2020, the Dutch championship lost a promising winger Stephen Bergwijnwho moved from PSV to Tottenham. It is also expected that in the next transfer window the example of teammates in the national team will follow and Donnie van de Beck, which, according to the media, is being hunted by Manchester United. But tulips are not the only ones that grow well in the kingdom, and new talents are already ready to replace the indicated players, for which very soon a line from European clubs may line up.

Moreover, due to the crisis caused by the pandemic, many teams will not be able to spend substantial amounts of money on the purchase of promoted players in the near future. Not everyone saved up money during transfer bans, as Chelsea, who was easily parting with millions, did. But nobody canceled the need for strengthening anyway. Therefore, in conditions of austerity, the eyes of the clubs will have to focus even more on the Eredivisie and the young Dutch players. If you are looking for talented and quality footballers at reasonable prices, welcome to the Netherlands. All contract data and appraised values ​​are taken from transfermarkt.com. 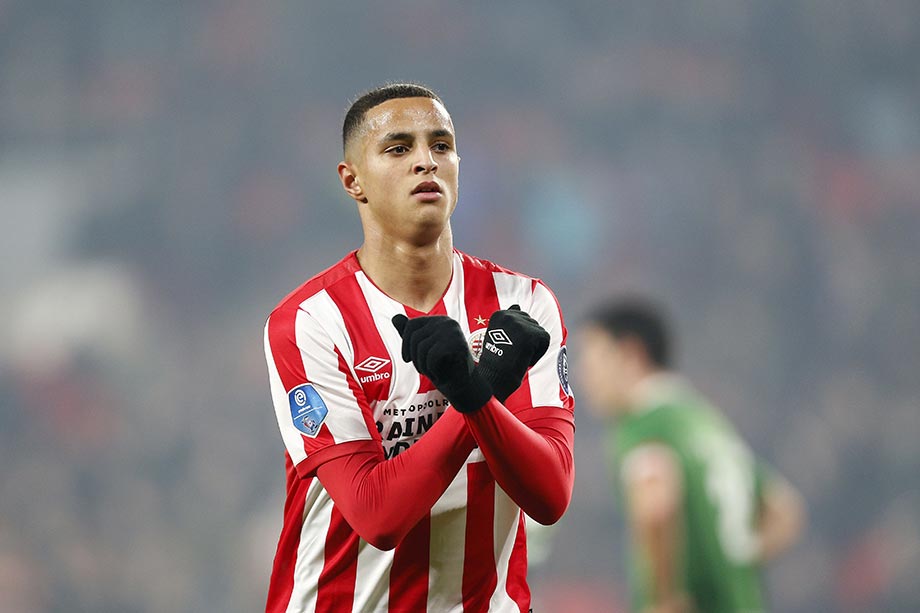 Mohammed Ihattaren – the main talent of the new generation of Dutch players. The 18-year-old has looked great on PSV’s main team this season and is already part of Ronald Koeman’s plans for the country’s main team. The Moroccan footballer had a reputation as a rising star in the academy of red and whites and made his debut for PSV at the age of 16, coming as a substitute against Groningen on 26 January 2019. From that moment on, his professional growth was unstoppable, and last season in 33 matches in all competitions he made 9 assists and scored 7 goals, being one of the most important links in the club from Eindhoven.

At his best, incredibly technical and self-reliant, Ihattaren plays the role of a central attacking midfielder. Also, Mohammed can easily close the winger’s position, and Ronald Koeman has already named the young man one of his options on the right flank. Over the next year, Ihattaren will strive not only to continue his rapid development with PSV, but also to secure a place in the Netherlands national team. It is quite possible that Mohammed Ihattaren will dazzle the whole world with his performances already at Euro 2021. 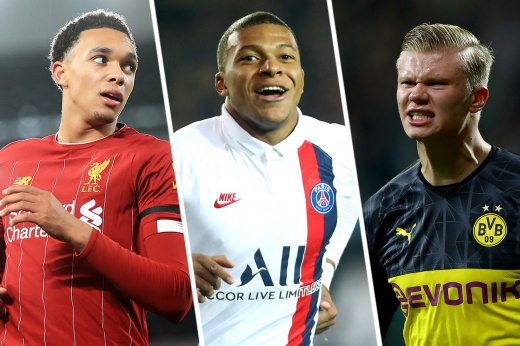 Future owners of the Golden Ball. 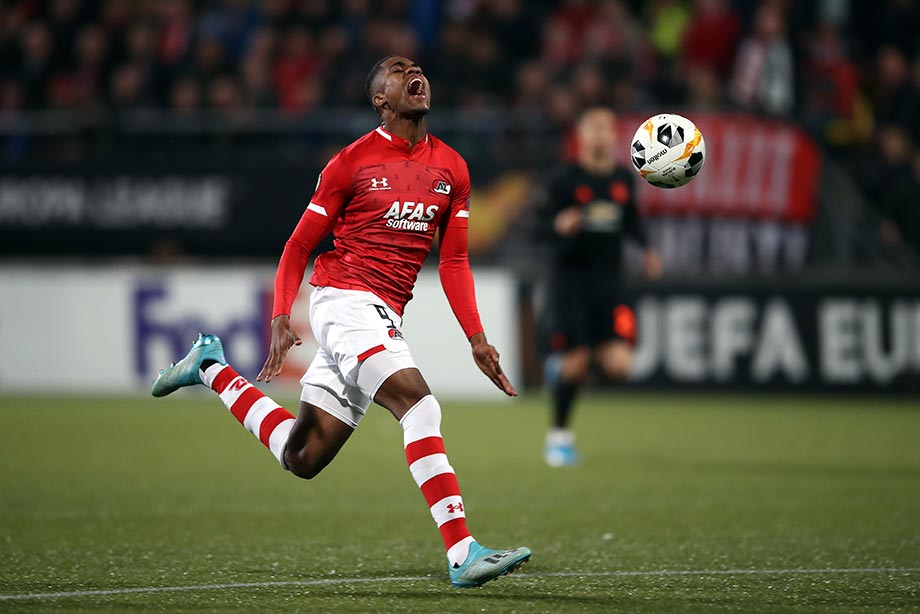 19 year old center Myron Boadu only last season he became the main player in his AZ, but he has already managed to make his debut in the national team and mark this significant event with a goal. The athletic and speedy striker has a bright future ahead of him. Boadu is still developing many aspects of his game, but the skills already available make the 183-centimeter striker deadly for the opponent’s goal. Exceptional ball control, well-directed and accurate shot, confident riding game allowed him to shoot 14 balls in the Eredivisie and 6 more in European competitions. Such performances did not go unnoticed, and already at the end of April, information appeared in the Dutch press that Barcelona was following the talented player. But, probably, he should still stay for another year in the club that raised him and consolidate his current successes. 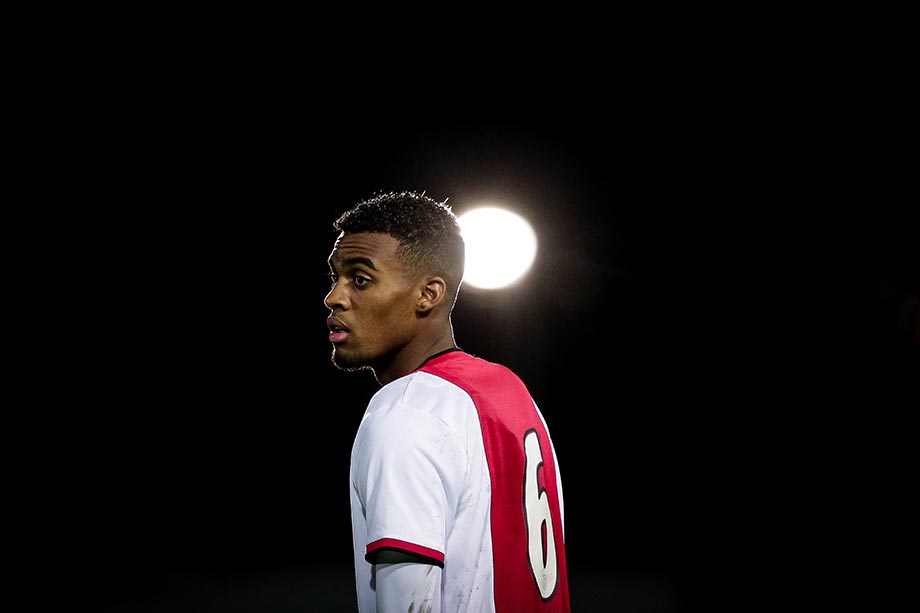 The newly minted Ajax central midfielder attracted the attention of specialists, playing in the Ajaxid U17 team at the age of 14. The arrogant behavior of a young man can cause negativity, but this should definitely not interfere with recognizing his undoubted talent. Speaking regularly for the Amsterdam reserve for the past two years, Gravenberch has accumulated a solid gaming experience, and it was clear that he was out of place. Thanks to his impressive physical characteristics and height of 190 cm, he easily dominated his peers and older footballers in Oerstediviziya (the second-strongest division). The player is also distinguished by sharpness and quick decision making. Therefore, there is nothing surprising in the fact that in the past season he had 11 meetings for the main team. Yes, solid, but far from ideal. The technically gifted midfielder is good not only in defensive actions and selection, he has 8 goals scored on his account, 2 of which fell on the Eredivisie. In the next campaign, it must be assumed, we will more often see him at the heart of Ajax and watch further progress. 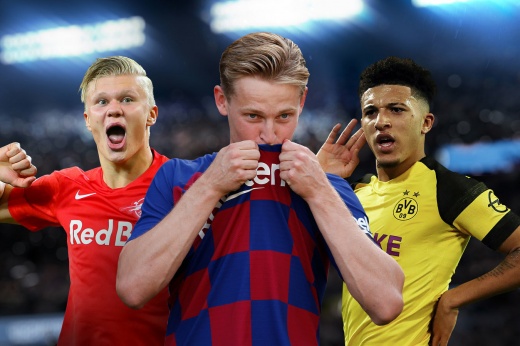 A huge text that everyone got into. 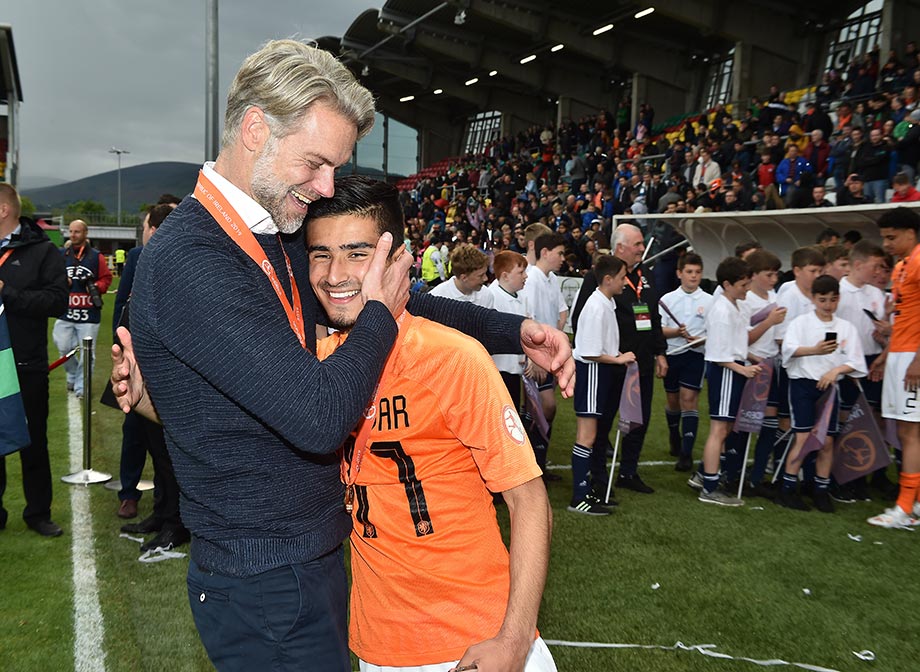 The Ajax Academy is releasing young talented players non-stop, but in the person of a 17-year-old Naji Unuwara Amsterdamians have an absolute gem. He is used to playing the role of a left winger, but he can also take the position of the top ten. His ability and technique have been called sensational and they have already brought him comparisons to Hakim Ziyech in the Dutch media. Naji is the main player of Yong Ajax (second team) and has provided his partners with 5 assists in 10 matches of Oerstedivision. He managed to make his debut for the senior team in the Dutch Cup match against Spackenburg on January 22, scoring his first goal at the highest level along the way. At Ajax, absolutely everyone is shocked by the development of his youthful talent, which dazzles fans with dribbling and passing skills. It won’t be long before Naji shines in the Eredivisie. 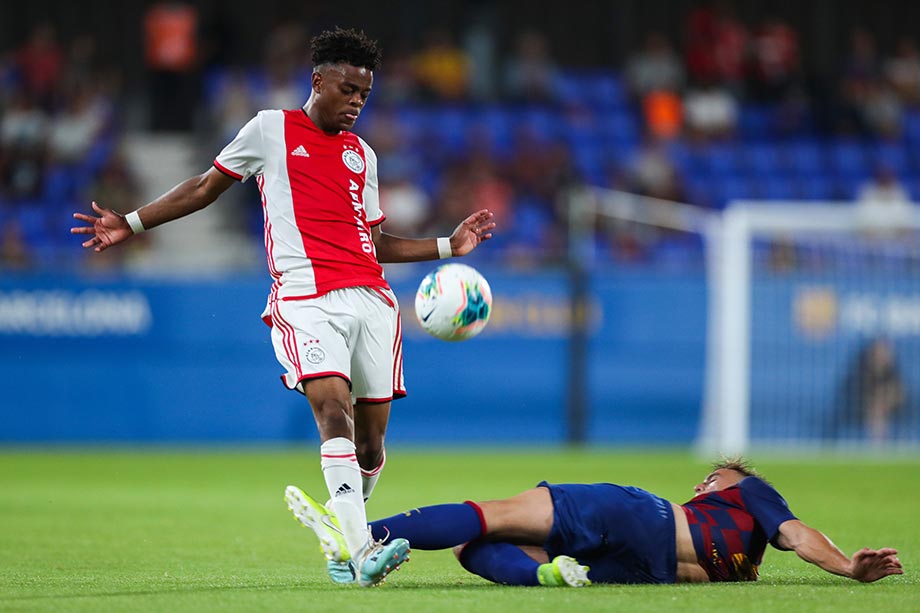 18 year old Sontier Hansen is rapidly gaining a reputation as one of the Netherlands’ brightest attacking talents. He has already been linked to a possible transfer to Manchester City, Juventus and Milan. Hansen can play on both flanks of the attack, but the young man shows his best qualities in the center. He loves to rush headlong at the opponent’s defenders, showing them his speed dribbler skills. This season was great for Sontier – he made his debut on December 18 last year in the main team of Ajax in the cup match, and 4 days later he appeared in the Eredivisie in a meeting with Ado Den Haag. Also in the Netherlands national team, he finished fourth at the 2019 World Cup for players under 17 years old in Brazil (held from October 26 to November 17), becoming the top scorer of the tournament. 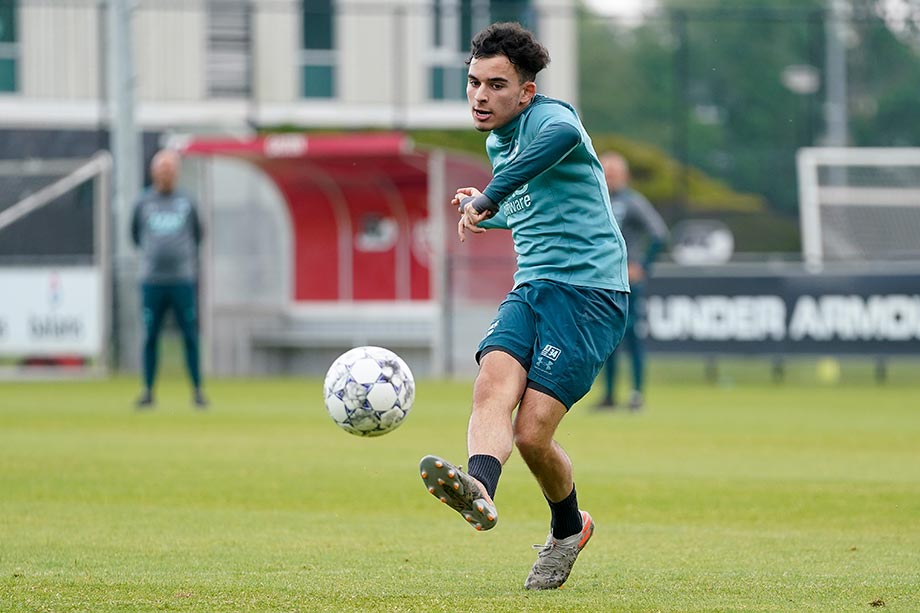 Mohamed Tabawni Is the star of the Netherlands national team that won the European Junior Championship in May 2019. The player who scored the winning goal for the Spaniards in the final is still waiting for his chance to make his debut in the main AZ team. A creative attacking midfielder with exceptional technique and field vision, he can also play on both flanks using his effective dribbling. Appearing regularly with Yong AZ this season, Mohamed has helped his partners excel five times, confirming his reputation as a good passer. Tabauni, following Miron Boadu, Calvin Stengs and Ten Copmeiners, may become another AZ Academy product next season, which will have a significant impact on Eredivsia. 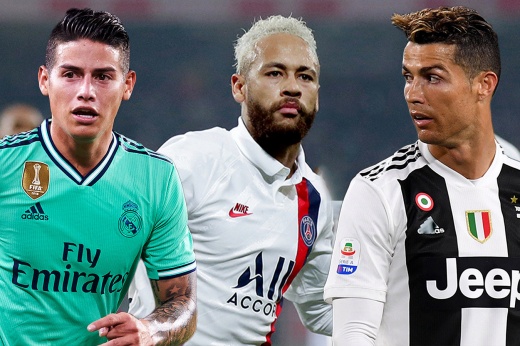 Ronaldo, Neymar, Dembele and other heroes of the transfer rumors. 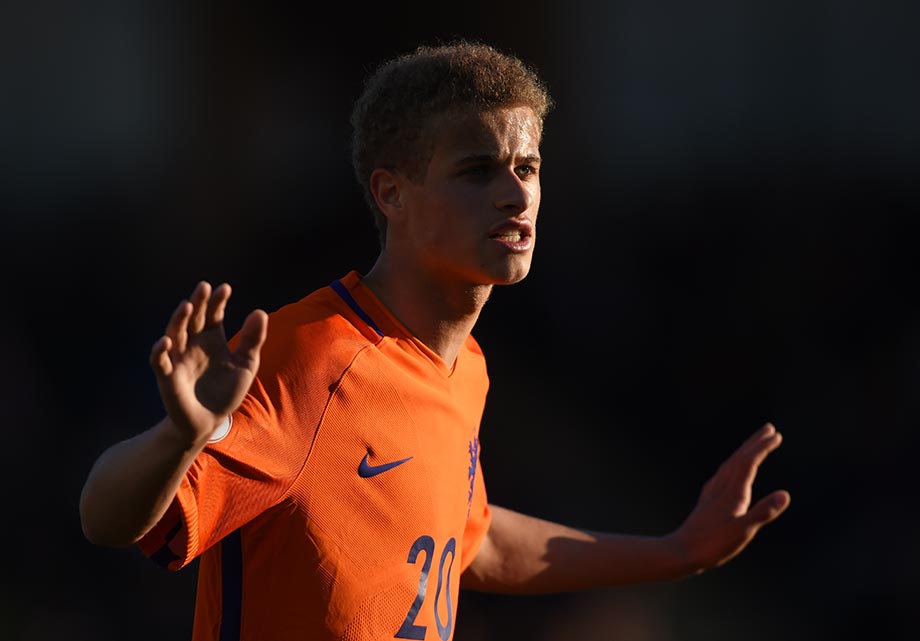 By the age of 18, the central midfielder Kenzo Goudmain has accumulated rich experience in the youth team of AZ, having played more than 60 matches with it. And on May 16, 2019, the “box-to-box” player tried some top-level football, coming on as a substitute in the match against Excelsior. At the moment it is not yet entirely clear how good his attacking and defensive abilities are for the main team. But the fact that he is very agile and, due to dribbling, promotes the ball well, is already evident. The next step for the winner of the UEFA Euro 2018 in England will probably be an attempt to gain a foothold in the AZ mainstream. 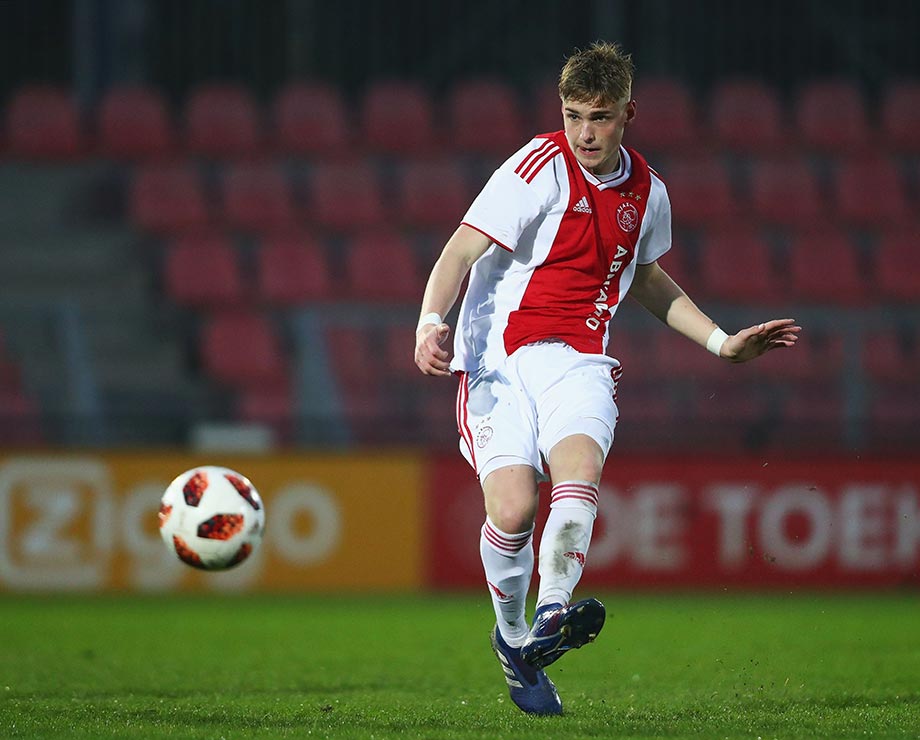 In recent years, Ajax have nurtured enough talented midfielders, and the next one to knock on the main team’s door is Kenneth Taylor… Last May, he was captain of the U17 team that took first place at the Euro in Ireland. And this season, the armband was on his sleeve and in the matches of the 2019 World Cup in Brazil. Taylor is a leader on the pitch who works diligently for the good of the team, both in tackling the ball and organizing attacks. Kenneth is showing the makings of a great playmaker and will undoubtedly have to make his Eredivisie debut in the upcoming draw. The last one he spent at Yong Ajax, playing 19 meetings and making 3 assists. 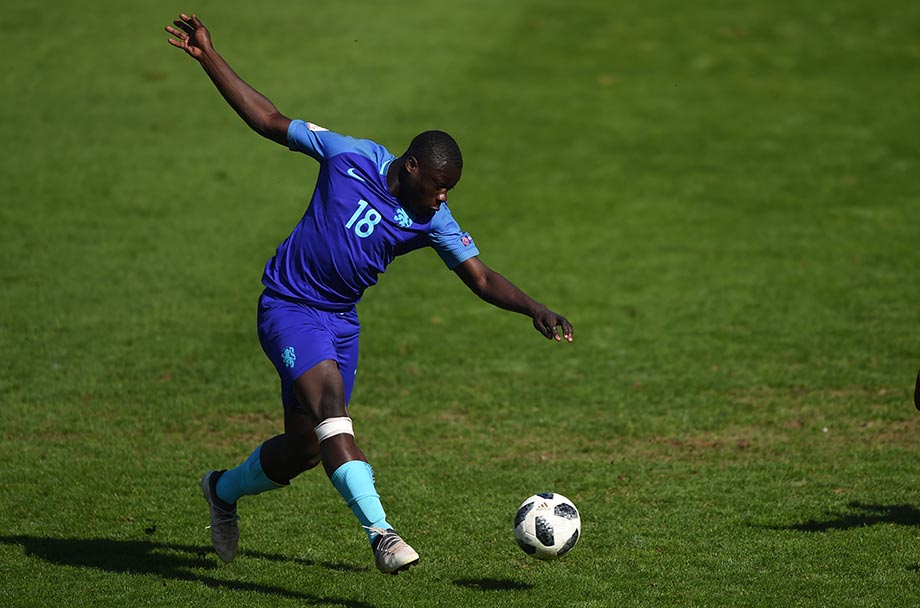 Brian Brobbey Is a striker with incredible potential. The 18-year-old’s agent is Mino Raiola. A short, but very well-knocked forward, with excellent speed and deadly right foot, for many years now he has impressed the coaches of the youth and youth teams of Ajax with his performance. Last season, he continued to justify the advances given to Yong Ajax, scoring 7 goals in 13 games in Oerstedivision. The figure should have been significantly higher, but injury intervened, which also prevented Brobbey from showing himself at the autumn junior world Cup 2019 in Brazil. Nonetheless, Brian is a two-time European champion (2018, 2019) with the U17 national team, for which he shot 16 goals in 23 meetings. It seems that Raiola is growing up another super-profitable ward.

Attacking football is cultivated in the Netherlands, therefore, until now, only strikers and midfielders have been represented on our list. But the time has come for the defense and the personal defender of Feyenoord with a difficult to pronounce name Lutsarel Gertreida… The departure of Jerry Saint Just to Mainz and the health problems of the rented Rick Karsdop provided the 19-year-old with the opportunity to break into the main roster of Rotterdam. And the 184-centimeter athlete took full advantage of it. In the youth teams, he came out exclusively in the centerdef place, but Dick Advocaat transferred Lutsarel to the right flank, where he ran back as many as 17 meetings (11 of them at the start) in the Eredivisie. A tall, strong and powerful defender, however, still has to add in the attacking game to qualify for the place of rightback on a permanent basis.

Already in England? Werner posted a photo from the airport