Good day! Today I want to tell you about a great combination of roguelike and action RPG. Game Neverinth.

The history of the development of this game ended rather sadly, but even in its current form, it can please a certain layer of gamers. Perhaps you will like it.

By the way, there is a video review of Neverinth for my authorship. You can appreciate it, I will be grateful to you.

You know, there are such combinations that you try and fall in love. Potatoes with dill, strawberries with cream … well, or rogue-like and action / RPG. Perhaps, today we will talk about the latter. After all, this combination was successfully implemented by the game Neverinth. Although some have seen some Dark Souls anime here, no, this is not Code Vein.

Neverinth is such a cross between a third person Action / RPG and Rogue-like. To me personally, after a dozen hours it seemed like a mixture of Dark Souls and The Binding of Isaac. She took the best from the Souls – it’s the gameplay. Strong hit, weak hit, roll, chilochka – all in the spirit of soul-like. There are no bonfires.

And from Isaac, the game took the generation of random items at the level, which can be extremely passive, and can wildly enhance the character. There are altars where for the maximum level of HP you can take cool objects, hidden walls that can be destroyed by bombs – in short, it brings back certain memories.

Three in a boat, not counting the chanders

There are three heroines to choose from in the game, which do not immediately open (which is also typical for roguelikes). At the beginning, a blue-haired girl is available, and after that you can open a red-haired and muscular lady and a dark-haired katana carrier. They differ not only in appearance, but also in initial stats and roll animation. Sinevlaska makes a standard roll, the muscular lady jumps rather slowly, and the nyanja-chan makes a sharp dash.

But the characteristics of the characters can be pumped. And how they grow depends on the character too. It works like a set of exp in Diablo III, for example. That is, your business is to kill mobs. The characteristics are distributed by themselves when you get a new level. They are pretty standard: health, damage, stamina, defense, luck and an analogue of balance from Souls – resilience. The level is not reset after death. He sticks to the character forever. In fact, this is the only permanent way to level up.

Apart from totems. This is such an in-game Tetris. The task is to put together a certain figure from colored figures, which can occasionally be picked up from enemies or found in secret rooms. After collecting a totem, you get a buff of this totem and a plus – amplification from inserted items. The color determines the characteristic. Green is health, blue is defense, red is damage, and so on. This enhancement is also not reset after death, but it is more difficult to get it than the next level. Over time, new totems will open, which give access to outfits for the heroines.

But there are other ways to level up. This is the essence. It can be spent on pumping character perks. These are passive enhancements that will help you find the style of play you want. This can be an increase in damage done, health regeneration, an increase in stamina and its regeneration, and much more. This leveling is pretty interesting. Of interest are both the perks themselves, for example, the ability to build a build based on increasing damage after taking damage from the enemy (which will not help much on some one-shot bosses), and the mechanics of this pumping itself.

The choices she makes are curious. So what would you choose, 100% more likely to increase health by 5 points, or 20% more likely to try to increase maximum HP by 3 percent? In the long term, the second choice is better, but to get this perk, you can spend a lot more essence. Essence pumping is reset after death or after returning to the hub location. Again, similar to leveling with all sorts of items in Isaac.

As a result, the game has three types of pumping. A common killing experience that is tied to the heroine. Totems that are available to any heroine, and an essence that works only in the current game session.

The gameplay of the game is simple, but at the same time it has its own interesting features. In addition to the standard hits and rolls, there is an accelerated version of them that works when you press the run button. This ability takes a part of life from the character in debt. The mechanics are called Life Debt. Which I would translate as “Blood Sacrifice.” The taken part of life will return with time, but if during this pledge you are damaged, your “suspended sentence” will be added to it. So use it wisely.

There are three types of weapons in the game, like heroines. Sword and shield, katana and large two-handed. Movset, on the one hand, each weapon is unique, but more importantly, these are special weapon techniques. For example, a katana allows you to “rip” enemy strikes, and a sword and a shield makes it possible to throw and twist a sword that will hang in the air for some time, causing damage. These techniques can also be separately pumped with perks and built around this build, which is nice.

In my opinion, there is even more from rogue-like here than from souls. Essence pumping is random and drops when the character dies. Moreover, this pumping is still a casino. Each perk has a chance that you will acquire it. If the chance does not work, it increases by 10 percent, and you just get +1 to the characteristic that is tied to the perk. Each time, the cost of pumping will increase. That is, at the beginning, a couple of thousand essences will be enough for a dozen or two attempts to take the perk, but after that you need to adhere to tactics, because the pleasure will become expensive. Whether you successfully pick a perk or just get +1 health, the cost will still go up.

Dress up your Valkyrie

A more prominent rogue-like element is the impact of equipment on gameplay. Here I had clear flashbacks with Isaac. You know, when at the very beginning you could get powerful items in the golden room, and sometimes you passed the first couple of levels almost naked, taking useless garbage there.

Neverinth contains new weapons, all sorts of attack modifiers (fire damage or even the ability to unleash a ranged attack on impact), as well as jewelry. There are earrings, amulets and rings – one per slot. And the combination of these items is a very interesting part of the game. It was because of her that I returned to it over and over again to do something imbalanced, well, or at least funny. On one of the races I found a weapon that did not waste stamina on impact. In doing so, I came across a ring that converted the damage I received into stamina. It turned out to be a pretty easy race, although the Valkyrie still took one shot at the end …

If this kind of roguelike entertainment appeals to you, Neverinth can lure you in for hours, if not dozens. But even if you were attracted by the description of the game, I am obliged to warn you about one important thing.

Thrown away as it is …

The game is raw, unfinished and, the saddest thing – no one will finish it. Development, for some unknown reason, stopped, and the version with the latest patch from early access was rolled out for release. The game will not tell you directly about this, this information can be found in the game’s news section on Steam. In the game, there are still promises that content will be added soon, and this version is not release.

Therefore, the game has disadvantages. It is also a combat system, which is quite unbalanced in relation to ordinary enemies. Even with a regular katana, the enemy receives a microstan from each hit, which makes battles with ordinary enemies too easy. Unless, you need to keep an eye on the walls, because if you hit the wall with the enemy, then the microstan will already be slammed by you.

There is little content given that it is still a roguelike. There are only 3 levels with very few enemy types. Accordingly, the game has 3 bosses + 1 bonus at the very end. You get used to them pretty quickly, they don’t have many attacks. Therefore, there is no particular interest in hitting them over and over again. Personally, I was more interested in different combinations of equipment, but certainly not in different enemies.

The final part of the game is generally a kind of teaser. Here we are shown some kind of dragon, which has nothing but a visual model, after which we can climb to the final location for the battle with the last boss. And the last locations look extremely scary. It seems that they also bear a warning that “content is in development”, but in fact, not.

It’s not so simple 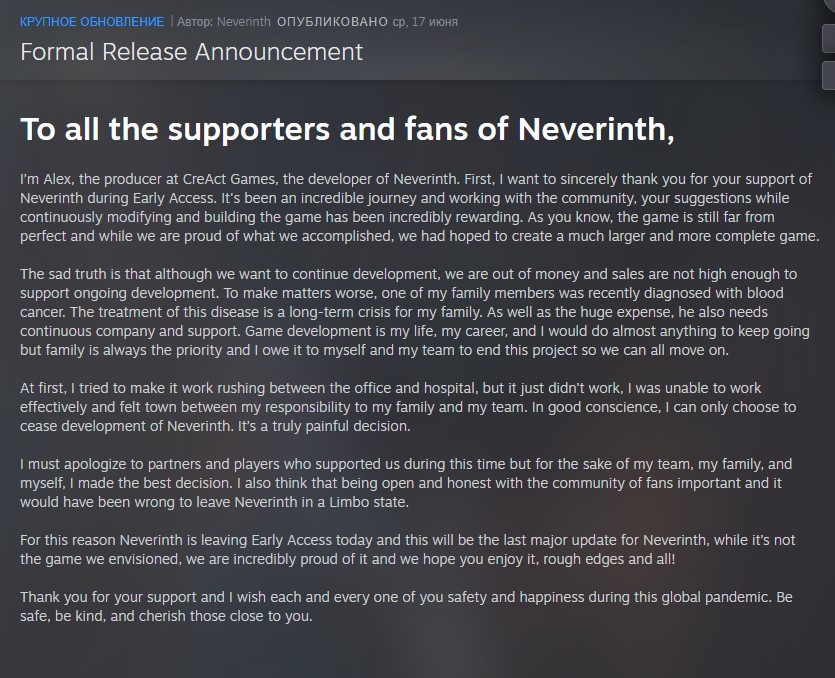 As a result, the game feels like a kind of paid demo, which is quite playable. But it is sold as a complete game. There is no warning anywhere on the game page on Steam. Therefore, I cannot advise everyone this game. It’s one thing if buying Neverinth could support further development – then I myself would buy another copy. But no, there will be no more content. Fans that appear ask for access to the game code, but the developers do not appear in the community.

After a message from the producer of the game, communication with the players was cut off, which is sad. After all, the situation seems a little cloudy from the outside – why did the development stop due to the problems of the producer? But there’s nothing you can do about it, and I don’t want to get into these questions.

It’s a pity that the game turned out that way. The potential here is huge, even in the current version there is a certain interest in playing. If this potential were also revealed, then Neverinth could be a small hit.

If the incompleteness of the game doesn’t scare you, it’s worth a try. Neverinth can be addictive, especially if you enjoy soul likes and roguelikes. Otherwise, the three hundred wooden ones can be used better.

For this I have everything. If you liked the review or was useful to you, I will be grateful for your plus or even a subscription. And if you played a game and have something to discuss, I will be glad to talk in the comments. Thank you for your attention and see you soon!