Nikita Gusev is a valuable player for New Jersey. Rumors about termination of the contract with him are nonsense

The early termination of the relationship is disadvantageous to both parties. 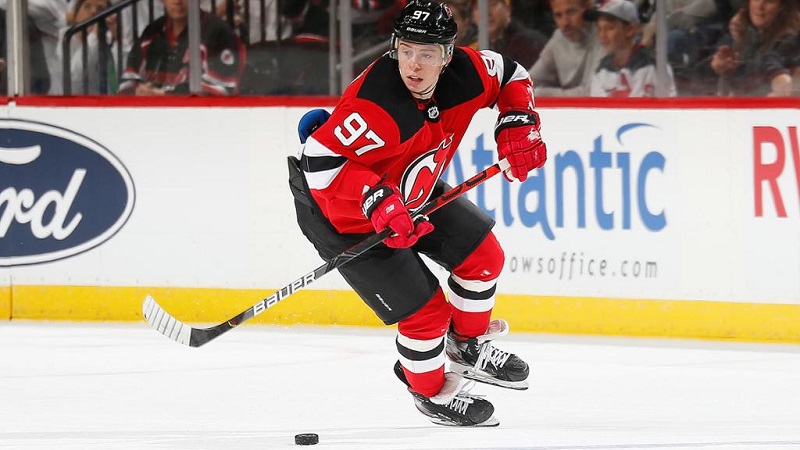 According to Metaratings.ru, forward Nikita Gusev can leave “New Jersey”… According to the portal, the main reasons lie in the new head coach Lindy Raff, who replaced Alena Nasreddin in this position. The news says that Gusev will either be exchanged or the rest of the contract will be bought out.
We do not deny that there are a lot of surprises in the hockey world, but to immediately redeem Nikita Gusev’s contract is something unreal. Lindy Ruff officially became the head coach of the Devils, but how can a mentor who has not yet seen the players in action right away how to decide who exactly does not need the club?

Gusev is one of the best in the “New Jersey”

That is, “New Jersey” wants to get rid of one of the best strikers just like that? Why not exchange? Gusev will definitely be in demand in the NHL. The same “Columbus” lacks a techie in the team, and these are draft picks for the “Devils”, and not a fine on the payroll. Moreover, you can pull the next season to the deadline and get great benefits.

Perhaps there are claims to Gusev about his “usefulness”, but even in this component Nikita is in seventh place from the bottom in the club’s index. He has -15, for the same Khishir (leader of the “Devils)” plus / minus is -16, and the most useless player in the “New Jersey” is Jack Hughes, with a usefulness of -26. 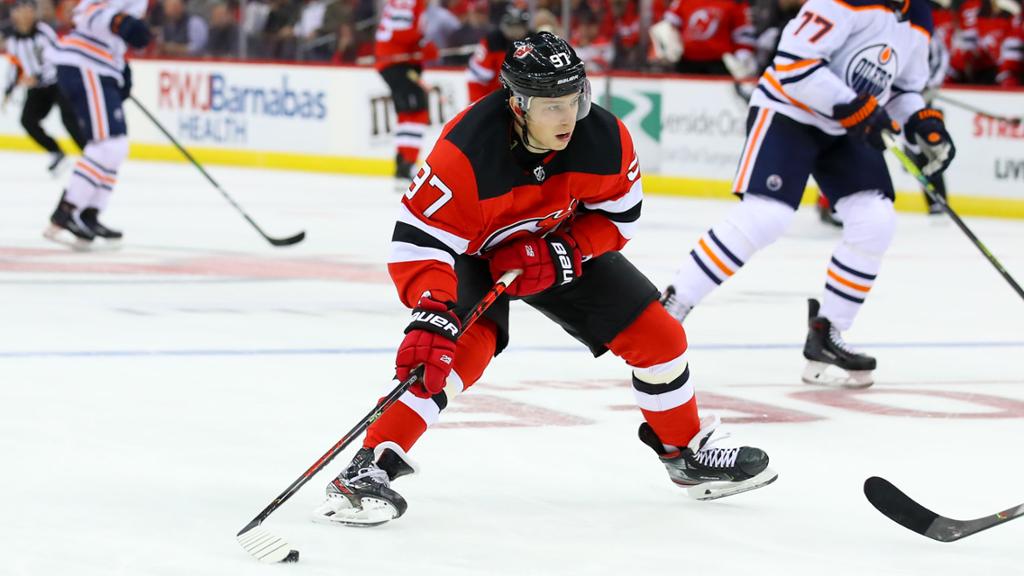 There is no point in buying out the contract at all

If New Jersey’s payroll were full, then buyouts would go into business, and Nikita would not be the first on this list. Of the most “empty” agreements between the club and the player, one can see Corey Schneider’s contract with a $ 6 million cap hit until 2022, but even in such a situation when the goalkeeper was completely disappointed – the Devils did not buy the contract. Why bother yourself with a 4-year fine with a free payroll?

In the 2019/2020 season, New Jersey continues to pay part of the salaries of Wayne Simmonds (2.5 million), Sami Vatanen (2.437 million) and Taylor Hall ($ 3 million). Added to this is a fine for the redemption of Mike Camalieri’s contract and New Jersey pays another 250 thousand dollars to Ilya Kovalchuk.

Next season will be the last one with $ 1.6 million on the payroll for Mike Camalieri. Kovalchuk will continue to spend 250 thousand dollars until 2025, but this amount is generally insignificant. That is, New Jersey’s payroll will be virtually blank. 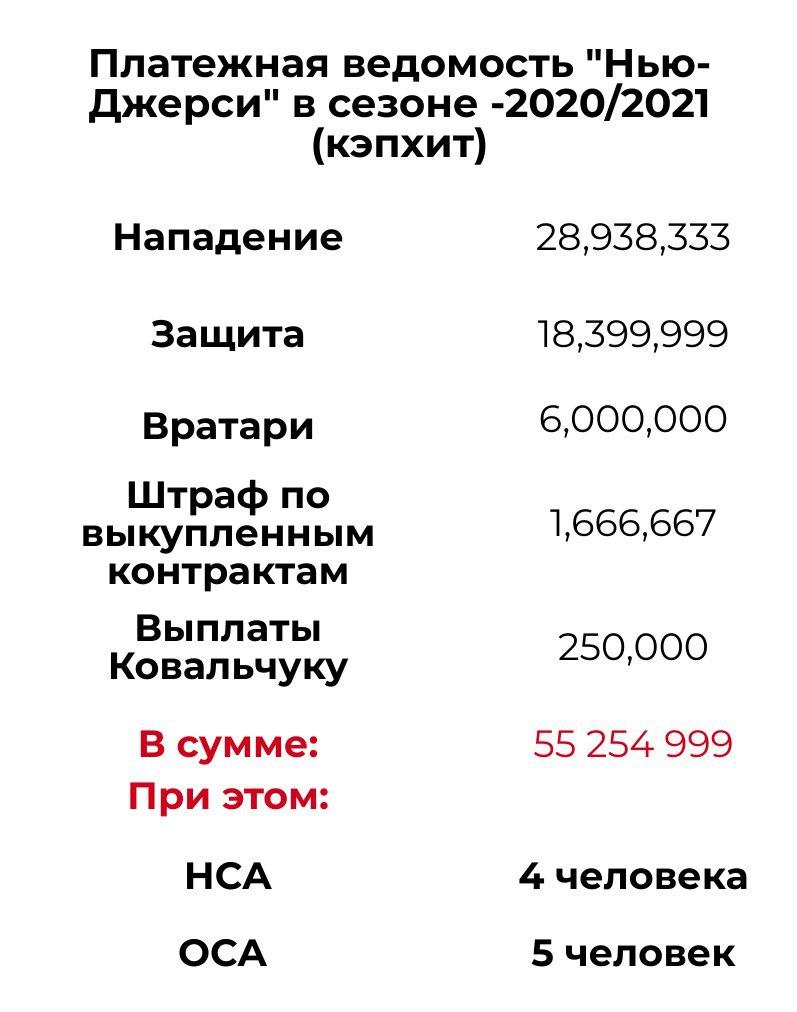 The Devils’ total payroll will be $ 55.254 million next season. This does not even reach the “floor”, and then for some reason to buy out Nikita Gusev’s contract. It should be borne in mind that this amount does not include possible new signing of unlimited free agents and renewals of contracts with restricted free agents. That is, “Devils” will go over the ceiling, but not much. Imagine that over the offseason, “New Jersey” will fill the payroll for 20 million – unrealistic.

In the 2020/2021 season, Nikita will have to receive $ 4 million, plus in 2021 his agreement ends, if New Jersey buys Nikita’s contract, then the Devils will get a savings of $ 2.666 million (which will pay player 2 / 3 of the contract amount, since he is over 26 years old). At the same time, “New Jersey” will have to pay Gusev another $ 1.334 million (and so on for two seasons). The penalty under the ceiling in the first year will be $ 1.834 million, followed by $ 1.334 million. The most logical thing is to leave the hockey player and wait until the contract ends, so as not to receive a fine again or to look for ways of exchange.

Why then did the rumors appear?

Most likely, everything has to do with Raff’s past. He is considered the “strangler” of Russian players. At one time, it was he who was considered the main problem, why Valery Nichushkin did not reveal himself in Dallas (from 2013 to 2017, Raff headed the Stars). Like, Lindy interfered with the progress of the Russian.

Raff is a demanding specialist, but Nikita Gusev has proved a thousand times that he is stubborn and ready to plow, to fulfill the coach’s instructions. With John Hines, Gusev added in the game without the puck, began to play deep in his zone and work out in defense. Yes, and sometimes came out in the fourth link, but even then Nikita regularly scored points. In general, in Russian hockey it is difficult to meet players who are more obsessed with the game than Nikita Gusev and Nikita Kucherov.

So at the moment, rumors that Nikita will go home in connection with the termination of the contract look like complete nonsense. Neither the player, nor the club, nor the head coach needs this, who has not even had a single training session with the team yet.

If the buyout of the contract actually happens, which will be devoid of any logic at all, then Gusev will not be envied, since taking into account the imposed ceiling in the KHL, it will be quite difficult to find a club according to your “appetites”. In this situation, there are only two options – to search for another club in the NHL or to “register” in Europe for a while. But that’s a completely different story.

“I want to have a revenge with Spivak” “All about MMA, mixed martial arts, mixfight, ultimate fights – bloodandsweat.ru