Diego Simeone staged a style revolution at Atlético. The attempt to play combination football from the bottom gave too controversial results at the beginning of the season and was curtailed, but even such an attempt is a sensation. Barcelona have spent 10 months in a state of internal war with themselves. All the participants lost in this war, and it seems that the club can only wait for the next elections and a new president.

Real Madrid’s season has also been weird. The club spent over 300 million euros on newcomers in the summer without selling anyone from the base. But of all the new players, only Azar looked like an obvious starting player. The rest – Mendy, Rodrigo, Jovic, Militao – maximum, rotation players. It is Azara Zinedine Zidane discussed more often than others even before the transfer window opened, and called it an absolute priority. At the presentation, he made it clear what importance the Belgian had in the project. “This is the player who makes the difference. He has always been of decisive importance, and we know how to use his qualities. ” But it so happened that the player, around whom the coach was planning to build a team, due to injuries, missed more than 50% of the matches of the season. Azar has only one goal and three assists in the championship. It turns out, we can say that the title was taken without him. 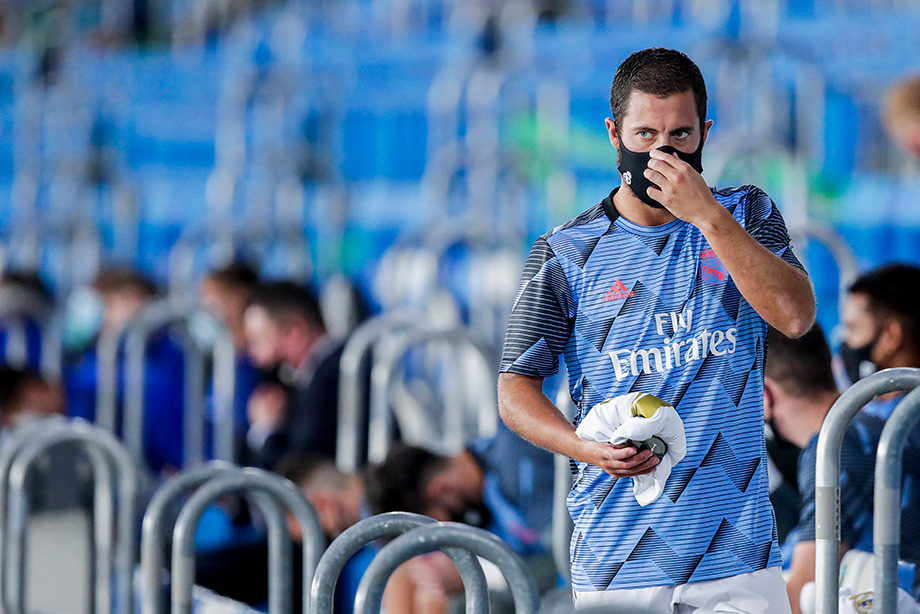 Of course, competitor problems helped. Barcelona and Atlético, after 36 rounds, have 79 and 66 points – the worst result since 2012, when Atlético came in fifth. But it’s not only that. Real Madrid also faced problems. From the very beginning of the season, Zidane began to play a new football, very different from what his team played before. This was done because of Azar, and the attempt failed. The season began with the loss of points in the matches with Valladolid and Villarreal, then Real was lucky to get away with a draw in the derby, then the defeat by PSG and defeat by Mallorca. But Zidane managed to cope with the problems better than the rest. 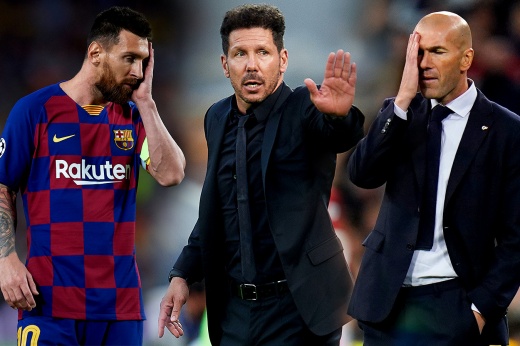 An unpredictable championship race is finally in Spain. Why is that bad

Minute hate of all superclubs Examples. The fans won’t like it.

Even in the first period in Real Madrid, the Frenchman showed himself to be a genius of temporary solutions. The constant rotation of the roster, the constant change of the scheme, the constant adjustment to those players who were situationally at the peak of their form – we still did not understand what style Zidane wanted to play. In the summer, it looked like it would be modern football with possession and lows, but Azar’s injury disrupted those plans. As a result, most of the time it was an old friend of Zidane, three years ago. With many quality temporary solutions.

Zidane’s key decisions throughout the season

After the October defeat to Mallorca by the nearest reserve, Zidane began to trust several players sharply less. A huge clip came in handy. Odriosola generally left in the winter, Jovic sat tightly in reserve, Isco lost his place in the start for a long time, James did not leave from the first minutes until the end of the year. Rodrigo and Bale suddenly became almost the players of the start, then they added Valverde as a winger. Application Valverde – one of the most interesting tactical decisions in Europe for the entire season. The footballer who was considered a stunt double Casemiro revealed himself in a new position in the attack. The reason is pressure.

Real Madrid were not a monster of high pressure during the whole season, but in big matches (for example, in clasico) they strangled opponents at the top level. It was thanks to the pressure that Valverde became a star at some point. He works amazingly without the ball. Several components are important in pressing. You need to tell your partners, understand when to enter intensive selection, you need endurance (it is more important than athleticism), and most importantly, you cannot turn off. Fede Valverde has it all. He is always focused and follows the big picture. Therefore, it is so useful not only in pressing, but also when his team is with the ball: he perfectly fills the zones and creates space. 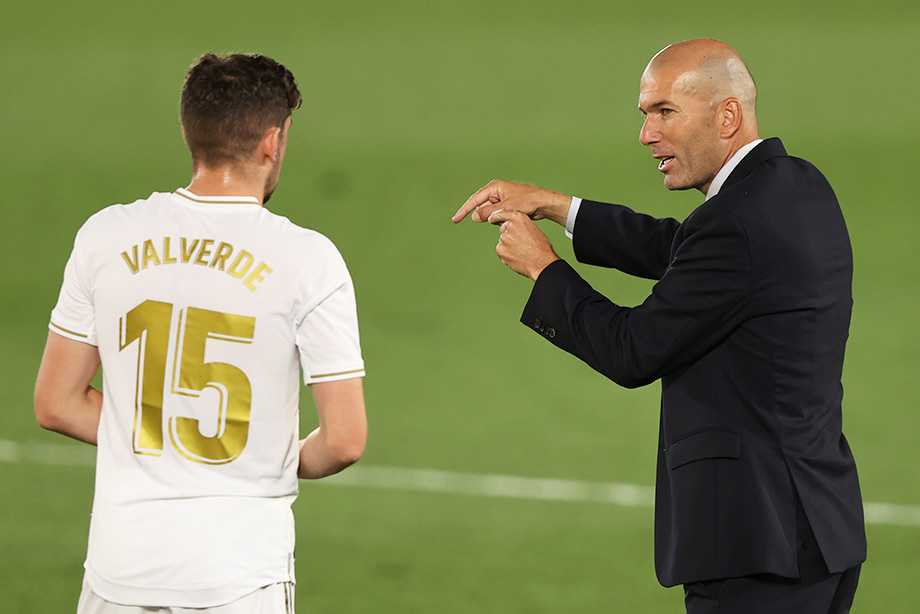 A typical Zidane situation: game principles that do not change regardless of the scheme. Real Madrid pressed qualitatively in the standard 4-3-3 scheme, in the 4-3-2-1 herringbone and even in the 4-4-2-rhombus, which required difficult work without the ball not only from Valverde (or Modric), but and from Bale… Bale played little, but came out from the first minutes in away matches with Barcelona, ​​Atlético, PSG and Sevilla – that is, those where you need more understanding of the game and more game discipline than can give Vinicius and Rodrigo.

Bale’s useful off-the-ball role in top matches is not as bright as Zidane’s decision as Valverde’s new role, and not as noticeable as a tactical move like the transition to high pressure, but it is also important. This is one of many decisions that have worked throughout the season, continually making Real Madrid an unpredictable opponent that is difficult to prepare for.

Here’s an example of another solution: constant overload on the left flank when Hazard was playing. To the flank where traditionally high connects Marcelo, both Azar and Benzema… All three have excellent resistance to pressure and excellent dribbling, all three know how to play combinations in a limited space. When Hazard played, the traditional roll to the left flank quite consciously became critical. 25% of Real’s shots came from the left flank and only 11 from the right, this is no coincidence.

The quality that Real Madrid has distinguished throughout the season is outstanding play at standards at their goal. Since the start of the season, Real have conceded five goals in the league after set pieces (not counting penalties). Less than Barcelona, ​​half as much as Atlético. In general, only two teams conceded in Europe – Liverpool and Juventus, and only PSG achieved the best result, but PSG played only 27 matches. 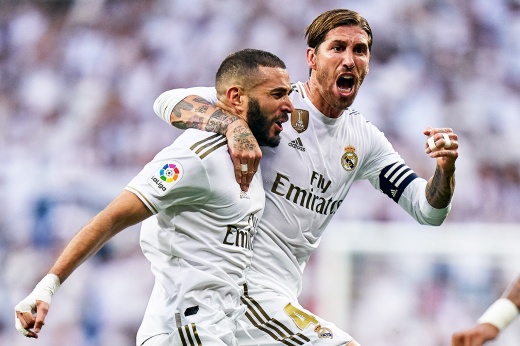 This is not to say about Valverde and not to say about Casemiro. The Brazilian had perhaps not the brightest, but the most even season. He was indispensable again at the base of the triangle in midfield – literally indispensable, he spent even more minutes on the field than Ramos… But it is also important in the build-up. It was difficult given Real Madrid’s new style of play, with fewer crossings. Casemiro did it. His contribution is clearly shown in one picture with a comparison of statistical indicators. Casemiro is highlighted in green, blue – Pyanich… The Bosnian often gives the last pass, the Brazilian hits more often, but in the build-up, that is, the first phase of the attack, they are almost equal. By the way, about the shots: Casemiro’s goals brought victories over Espanyol and Sevilla.

Benzema was also irreplaceable, who for the second year in a row makes more than 30 effective actions. AND Kroos, which is experiencing a second heyday with a new style. AND Courtois, who has 18 clean sheets in 37 rounds. But, of course, if you name one, it will be Sergio Ramos… 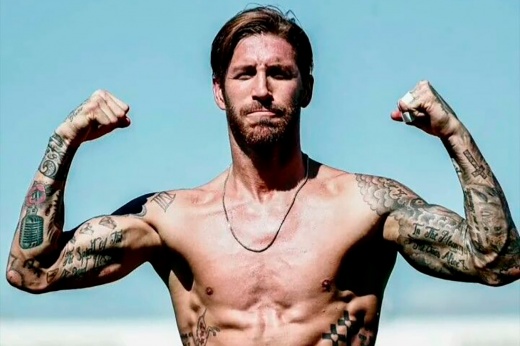 Ramos is the protagonist of the championship Real Madrid: the best in defense and scored 10 goals!

Sergio at 34 is phenomenal. He breaks records and scores almost the most in the team.

Yes, Real Madrid get penalties most often. But this advantage still needs to be realized. It is difficult even for the best players: Man City did not make four attempts in a row in winter (they even thought to let the goalkeeper beat), and Manchester United before moving Fernandes consistently wasted the penalty. Ramos doesn’t miss and that says a lot about the mentality. A simple example: after the victory over Granada, which retained the first place for Real Madrid, he was not happy about the victory, but upset because of the missed Courtois record. “Such mistakes should not be allowed. You cannot risk your victory and leave Courtois without a record. ” Disappointment after victory is a sign of the right mentality. Zidane celebrates Ramos’ role all the time. On July 10, when Ramos missed the match due to a bust of cards, Zidane called him the best defender in the world – and immediately explained what he was talking about mentality. “He is a fighter who communicates his attitude to the whole team.” 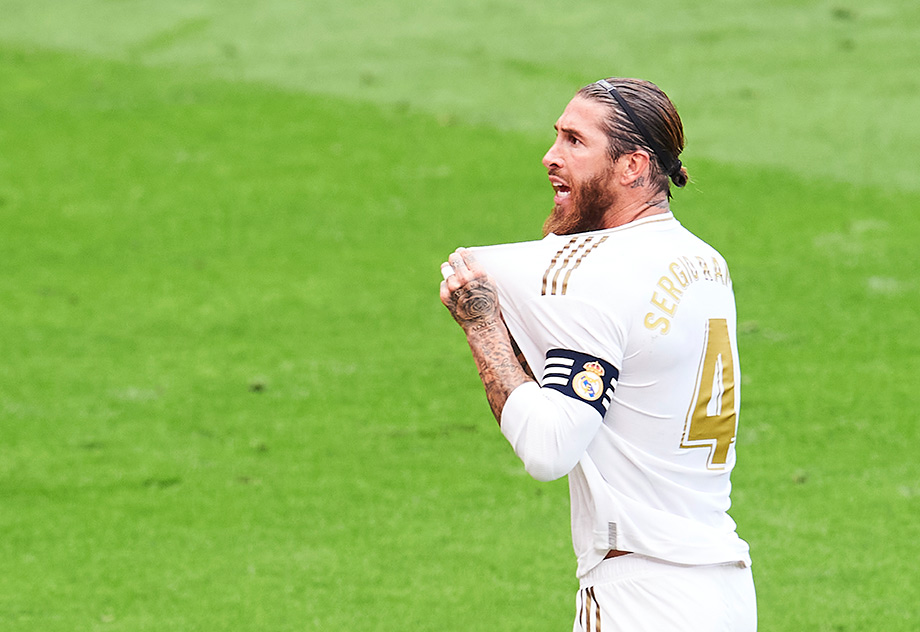 Sergio Ramos after the next goal scored

Gregory Dupont Is another person whose contribution can hardly be overestimated. This is the physiotherapist who replaced Antonio Pintus at Real Madrid. Pintus is considered one of the best in the world, but Zidane instead called a specialist who prepared the French national team for the World Cup in Russia and guessed right. After the restart, when even the best clubs suffered from three months of downtime, Real Madrid had a winning streak in a row, which eventually brought the championship.

Real has become a triumph of pragmatism. He missed the least in the top 5 leagues of Europe, was unable to consistently play spectacular football (although he tried), changed the scheme several times. As always, there was a lot of rotation under Zidane (who is the main one: Mehndi or Marcelo?) and a lot of situational changes during the season. Real Madrid have constantly adapted, and in this strange season, it is flexibility that has become a decisive advantage. It was not a season of great teams and achievements, but a season of constant problems and force majeure. “Real” coped with them better than the rest – the victory is just.

Subscribe to Kirill Khait’s telegram channel about European football. There is more of his content: posts, articles, videos and podcasts.

Ana Ivanovich + Schweinsteiger: the novel infuriated his MJ colleagues, and now they have an ideal family. She succumbs to him in tennis – Eye of the People – Blogs

“He’s still stupid.” Dziuba – frankly about the skirmish with Sobolev in the Zenit – Spartak match