Players who have been brighter, more stable, and more useful than others in this endless season.

When someone from Liverpool praises Alisson, they almost always talk about the external ease of his actions.

“We are grateful to him for making heavy saves easy,” a recent from Trent.

“One of his strongest qualities is calmness in moments of great stress and the ability to do what seems like a natural, simple decision. But in fact, all this is not easy, you must always find the perfect solutions. He has it. ”- Liverpool goalkeeping coach John Achterberg.

Alisson’s second year in the Premier League. Its coolness has become familiar, and at the same time, the effect of the missing piece of the puzzle, so powerful last season, is gone. Against this background, the Brazilian in many of the symbolic teams (probably in yours too) was ahead of the bright shotstoppers Dean Henderson from Sheffield United or Nick Pope from Burnley. But Alisson is still the Premier League’s most versatile goalkeeper, who knows how to save on the line (as in the last Liverpool derby), prevent danger without even making a save (with Norwich, Alisson extinguished two opposing players), and distributing assists (ok, transfer!).

If Alisson had not missed the return leg against Atlético, Liverpool’s season probably would not have ended. 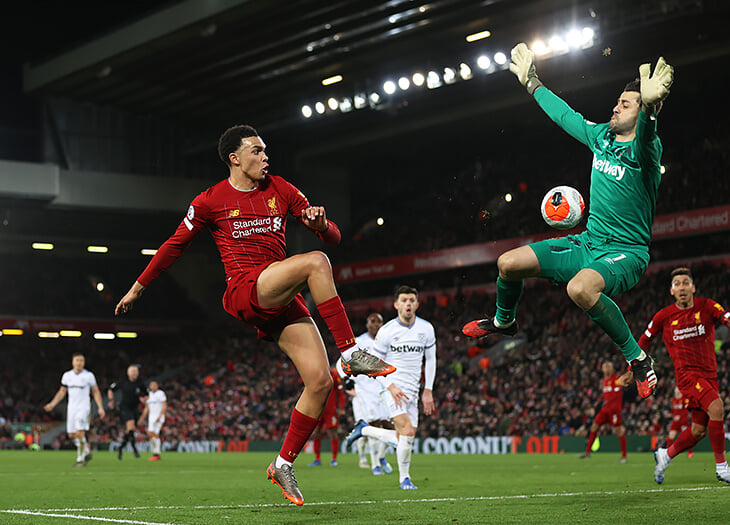 Trent finished the season with 13 assists and refreshed last year’s Premier League record for defensive goals. He knocked out 10+ assists twice in a row – this, for example, was not possible for Paul Scholes.

And yes, we all know where TAA is incomparable and what it has problems with. After the game against Tottenham, Gary Neville perfectly described a typical day for Liverpool right-back: “Trent is wonderful. He is one of the best attacking wingers I’ve seen. His transmissions are incredible. I call him De Bruyne among the full-backs … ”And after that, Neville listed three points at once in which Alexander-Arnold went wrong on the defensive.

In Liverpool’s system, Trent’s high connections are usually covered by Jordan Henderson. So it will be in our team. With known weaknesses, it is impossible to ignore his exceptional role as a defensive playmaker in one of the most dominant teams of modern times. 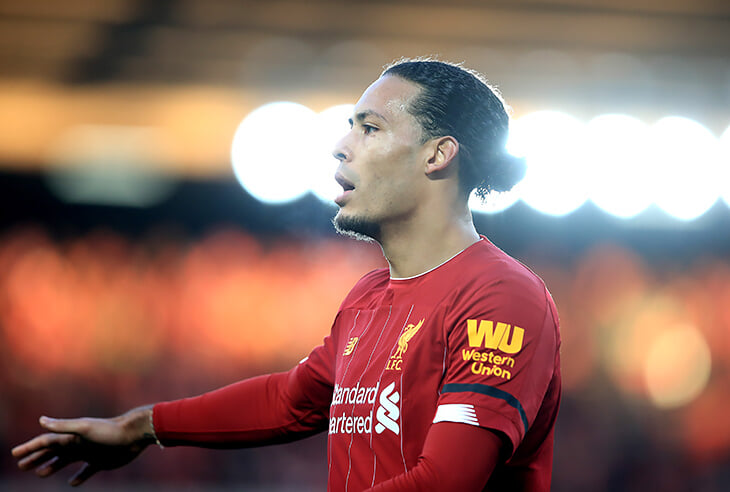 Van Dijk is the only Liverpool player to have played in all 38 rounds. This is just a detail that underlines its overall incredible stability. Virgil has been holding the highest level for 2 and a half years – in this regard, the VVD simply has no competitors in the league.

“How smart he is when he defends. He is very careful and patient. Therefore, it is difficult for many forwards to play against him.

For example, I’m fast enough and I like to go for strokes. Therefore, I need a defender to come forward on me. But if he delays me a little, he can wait for help. He’s very good at this. “ 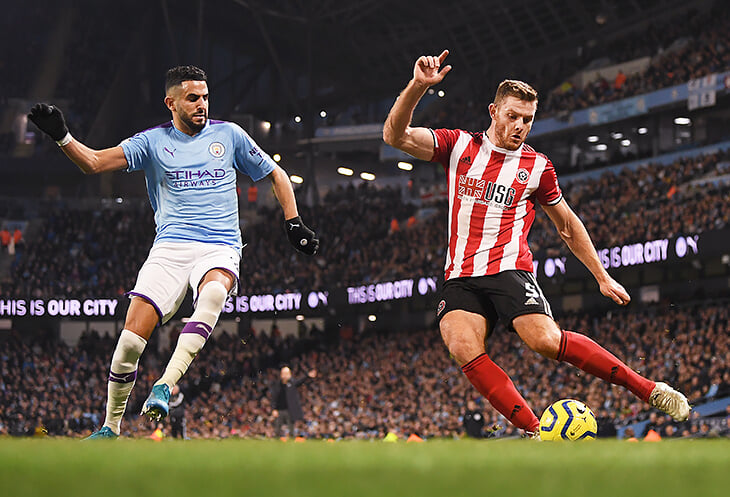 Emeric Laporte’s injury not only ruined Manchester City’s season, but also made it difficult to choose a second center-back to pair with Van Dyck. There is no 100% option – and this guarantees controversy and discontent.

Such a situation is a chance to celebrate the rise of Sheffield United, who have accumulated only 2 clean sheets less than Liverpool. The inclusion of one of the three central defenders of “SHU” automatically means a discrepancy in the game system – Chris Wilder’s football is outside the usual framework. Jack O’Connell is a significant link in a special structure with flank connections and overloads from center backs. He absorbed Wilder’s ideas, working his way out of the third division with the club.

On the other hand, Van Dijk may well adapt to O’Connell’s proactive manner.

Sheffield sorely missed the injured Jack in the opening games since the restart, a stretch that shattered the Champions League dream. 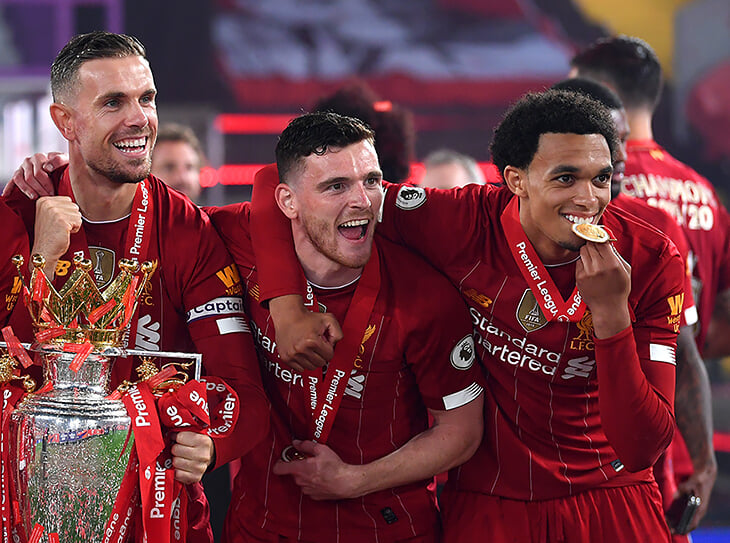 In September, Alex Oxlade-Chamberlain promised that if Andy Robertson knocks out 10 assists in the Premier League, he will hang Robbo’s jersey next to Messi’s jersey at home.

This is what an obviously losing argument looks like.

Andy made 12 assists – more only for Trent and De Bruyne. The Scotsman’s penultimate assist in the match against Chelsea was intended just for Oxlade-Chamberlain. To do this, Robertson in the 84th minute ran to someone else’s penalty, starting from the center of his own – and he could still run if Liverpool needed it that way.

“Robertson looks like a miracle of nature,” is a compliment from Danny Rose, who knows very well how to be the best left back in the league.

Robertson is different from TAA, he defenders better and plays more horizontal football, putting on endurance and non-stop movement. The brightest qualities of Liverpool’s full-backs were embodied in the goal of Mo Salah for Man City – one of the most important goals of the season: Trent with a transfer from flank to flank supported Andy’s connection, and he hung on the far post.

Admit it, Alex, you were embarrassed to hang up Robbo’s shirt just like that. 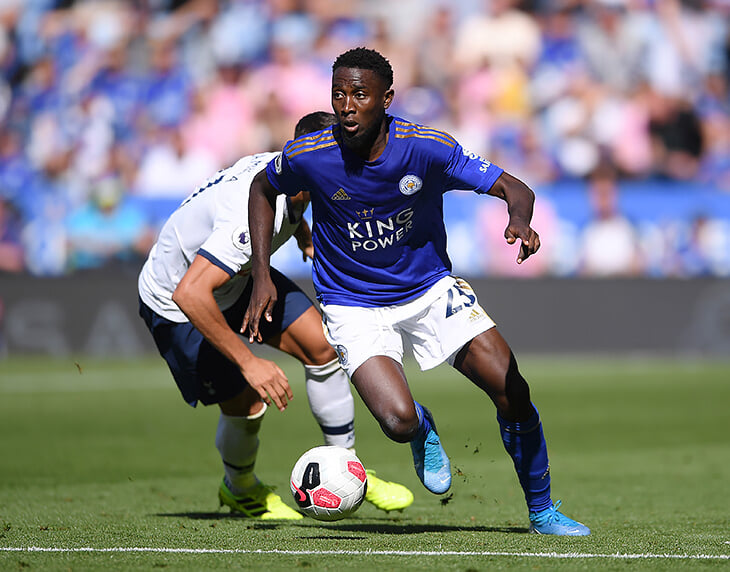 “Attacking players get recognition, and he does the dirty work. He has an understanding of the game, he feels danger. When you’re building a pressure game, you need someone like Wilf. He can cover spaces very quickly, he can put pressure. He has grown tactically and is playing better, “Ndidi praised Brendan Rogers.

“We, partners, as well as rivals who met with him, understand: he is a top player. It allows players like Uri Thielemans and myself to go about their business closer to the attack, because we are confident in the reliability behind us. ”- James Maddison also likes Wilfrid.

Ndidi is Leicester’s most important midfielder and the only defensive midfielder in Rogers’ formations. He offers himself at the beginning of the tenure and is sure to react when the tenure ends. Ndidi is the league’s leader among midfielders in tackles and interceptions. Having lost Wilfred by a month earlier in the year, Leicester immediately lost to Southampton and Burnley. His injury is one factor in the overall decline. 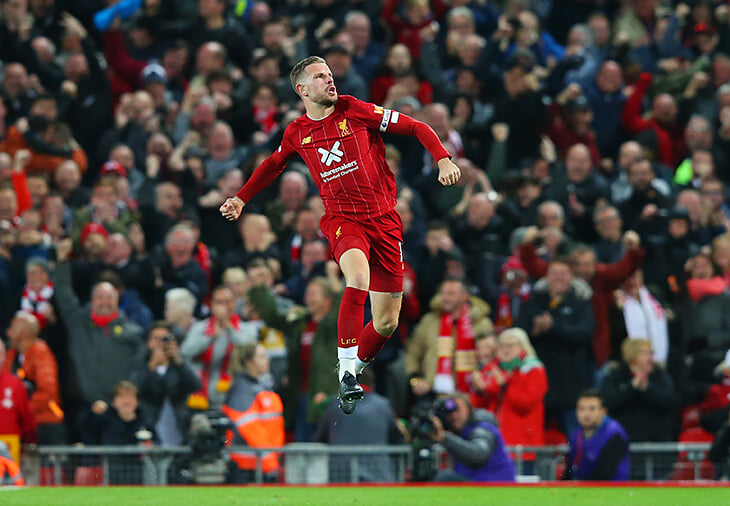 Liverpool’s game is decentralized, with midfield players having restraining and mechanical functions, while the stars are scattered across other areas.

Nonetheless, Liverpool’s collective success is best symbolized by the captain.

Fabinho’s adaptation allowed Henderson to return to the box-to-box position. Playing here, Jordan coped with a bunch of things: covered the TAA connections, participated in counterpressing, ran into the penalty area on time (4 goals in the 2019/20 championship – more than the three previous ones) and helped score (5 assists – the best result under Klopp, his passes brought victories over Wolverhampton and Norwich).

“When we had problems, it was Hendo who moved us forward,” notes Robertson.

Henderson was out of play due to injury when Watford smashed Liverpool 3-0 to finish off an unbeaten run. He wouldn’t necessarily have saved the record, but with him Liverpool do win more often than without him (69% of wins vs. 56% since Klopp came in). 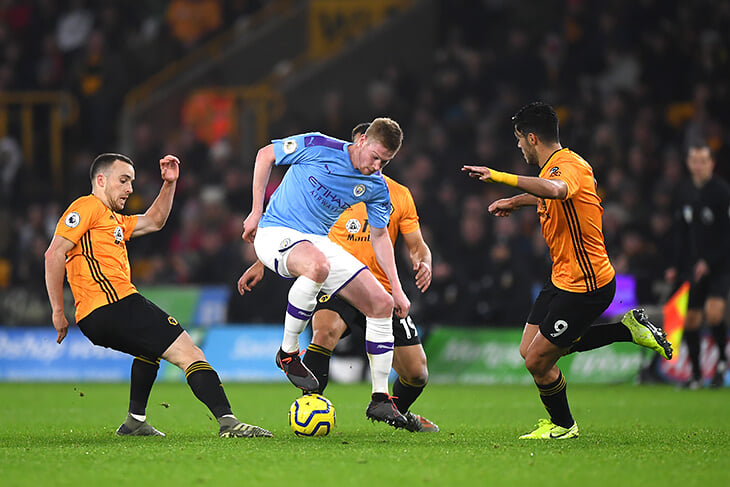 “Feels like there is a force field around him – they are not taking the ball away” – Jamie Redknapp.

Not interfering with KDB is a very bad idea.

Kevin has repeated Thierry Henry’s record for assists for a season in the Premier League (20) and, while there is time, he can revise an impressive selection of spoiled moments by partners. He individually dominated rivals (especially Arsenal flew in) and turned his tight crosses into the same Premier League brand that Beckham served in his time.

He also scored a lot – and there would have been more goals if the club had guessed to give him a penalty early.

De Bruyne is versatile, which allows Guardiola to use him in any position in the center: the eight, the pivot half that breaks the lines with vertical passes (hence Kevin eliminated Newcastle in the Cup), the ten in a 4-2-3-1 formation.

“I know people mostly see me as a creative player, but in many games I just played as a central midfielder. I have the dynamism to play forward and work backward. It seems to me that for the sake of the team I do well in all the components, ”says KDB himself.

Wrong word, Kevin. You are the absolute star of this bumpy Man City season. 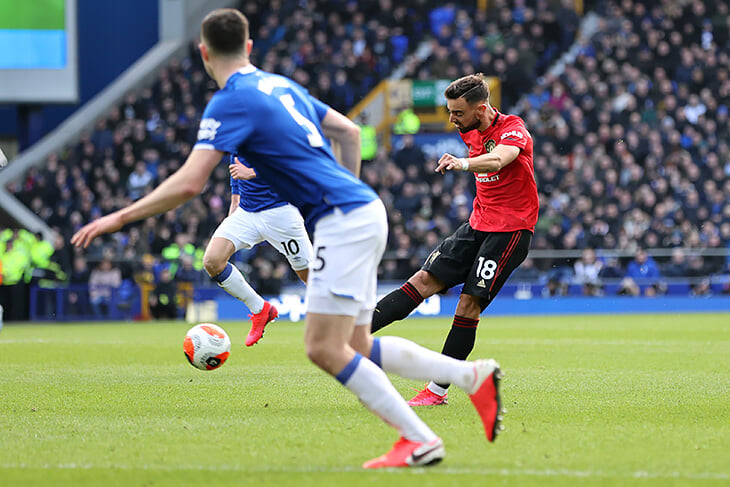 In May, the BBC’s website showed the team of the season, drawn up from polls of fans. There was also a place in it for Brun Fernandes, who played 5 matches in the Premier League.

After the restart, the Portuguese brought the number of matches in the league to 14. Still less than half, but Bruno’s effect is too great and deserves not to fit into the general rules. It’s not even Fernandes’ statistics that is impressive (8 + 7 only in the league – here the penalty and conversion from guys like Greenwood and Martial helped), but influence on partners and the Manchester United season, which can easily be split into two parts – before and after Bruno’s arrival.

Fernandes has a well-deserved right to risk and difficult passes (his overall passing accuracy is only 76%) – a right to which none of United’s midfielders particularly claimed in the first round amid Pogba’s injury. 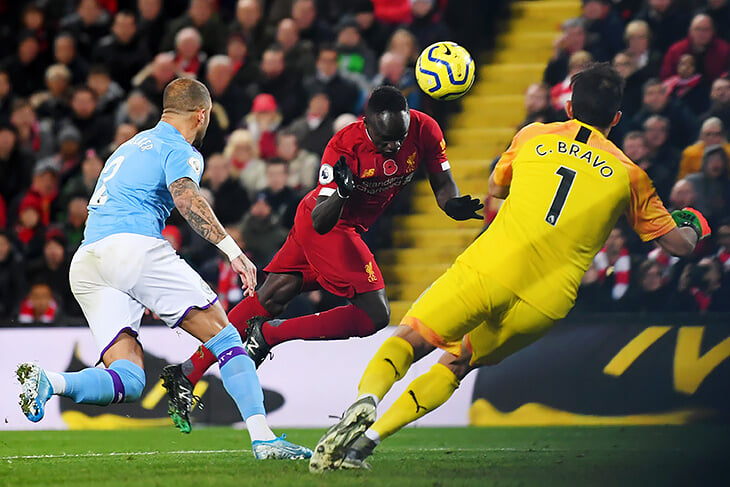 The best example is the November match with Aston Villa. Liverpool lost until the 87th minute – and then again recalled why Klopp once called his team mental monsters. Manet did everything: first, the Senegalese threw the ball on the head of Robertson who came running, after which, already in stoppage time, he closed the corner from Trent.

Klopp later referred to this match as one of the crucial steps towards the title.

Mane conceded a goal to Salah, but with stability and confidence in this campaign returned the feeling (perhaps for the first time since the 2016/17 season) that he is the main player in Liverpool’s attack. 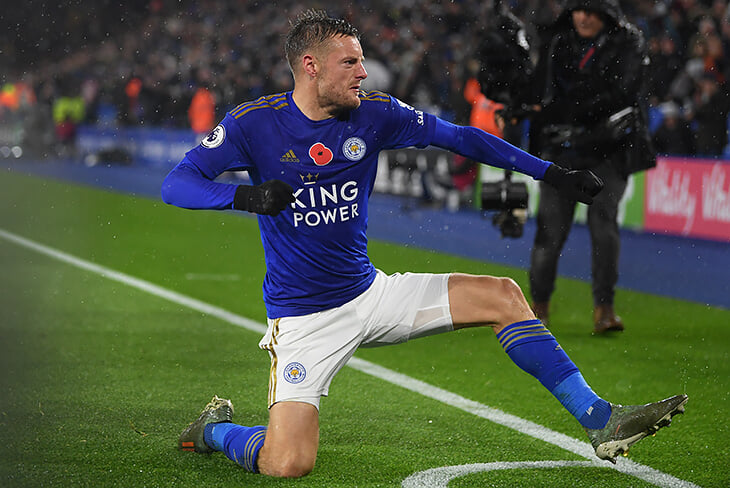 Vardy, 33, with 23 goals, is the oldest Golden Boot winner in Premier League history. However, we realized long ago that Jamie, who made his Premier League debut at the age of 27, does not care too much about age.

Okay, I still had to adjust in some way: Vardi began to be more attentive to the regime and, according to Kasper Schmeichel’s assurances, abandoned his long-standing habit – evening port before matches. Working with Brendan Rogers, attention (Rogers included the striker in the captain group), and the coach’s willingness to leverage Jamie’s strengths (if it seems obvious, you have something to discuss with Claude Puel) helped Vardy get into what he himself called the best in life. The 8-match scoring streak is a nice tribute to the championship season. 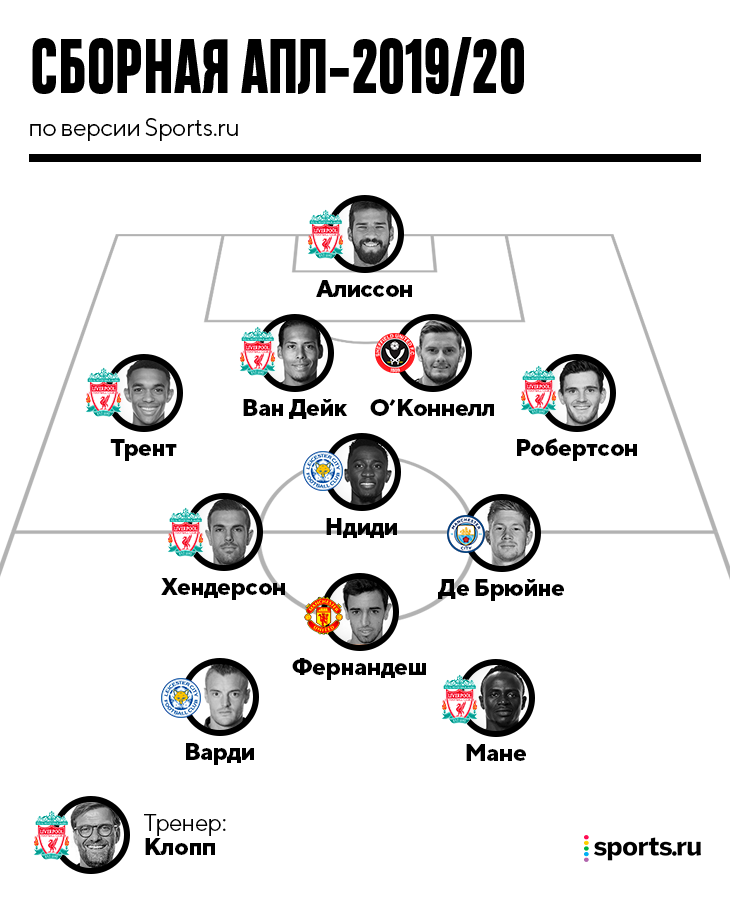 And this is the team B – from the players who do not play for the top-6 clubs (in its traditional form, Arsenal tried to clarify). And yes, the players here do not overlap with the main one: 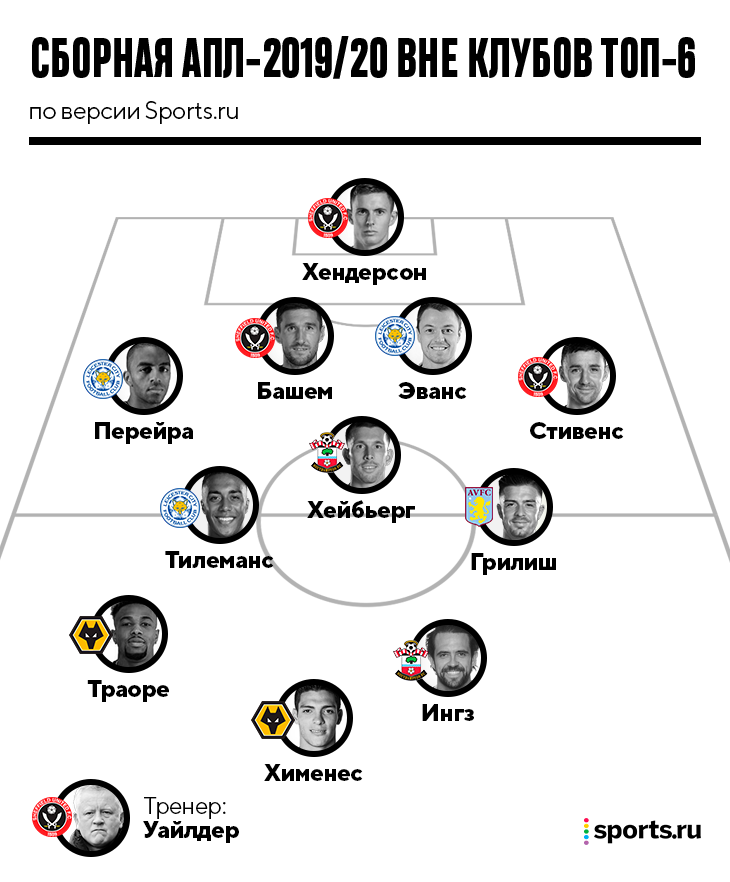 Crumpet of the Week: Diana Sirokai