Spartak wants to buy Urunov, what this potential transfer means for the red and white

It had to happen quickly – and it happened: Spartak, which acquired a new CEO from Ufa, close to the acquisition of a footballer from the same team. The laws of logic cannot be deceived, the human factor cannot be thrown out. Although in fairness, the red and white swung at a really bright and extraordinary performer. Perhaps the most interesting part of the Ufa team today.

Oston Urunov only 19 years old. He arrived at the Russian club from the Tashkent Lokomotiv in February, the price for the transition was 200 thousand euros. Since then, Auston is one hundred percent the main player of Ufa (9 matches in the starting lineup of 10) and its most liquid asset. The path to the new top turned out to be swift, but is Urunov really good enough to move to a team that is going to challenge Zenit and fight for European cups? 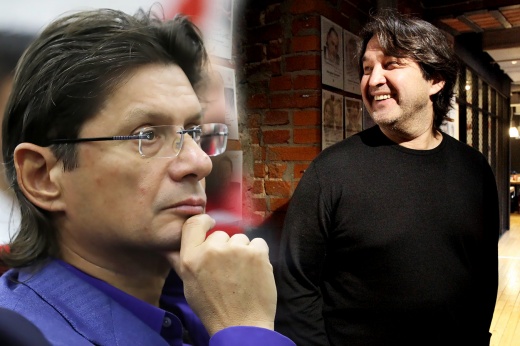 “The budget of“ Ufa ”and“ Spartak ”is 5-6 times different. And the results are similar. ” Fedun about changes

About Zorn, the financial condition of the club, Gazizov and Tedesco.

Let’s figure it out.

Urunov played in all positions, but so far the center of midfield suits him best

Throughout his career, Urunov has tried many roles. In Navbahor, in the earliest years of his professional career, he often played on the right and left flanks of the attack, then he was tried as a top ten, and already in Lokomotiv he was turned into a central midfielder with broad functionality. Although occasionally it could still be used in other areas.

Urunov himself expressed himself in an interview with colleagues on this topic: “It is more comfortable for me to play in the support zone, I like to take balls and run a lot, and on the edge I often just have to stand. But because of the dribbling, the coaches mostly put me on the attacking flank. Of course, I am ready to play where necessary: ​​in the support zone, and in the center of defense (I played there as a child) or on the flanks. ”

Evseev at Ufa enjoys the player’s versatility. In 10 matches for the new club, Urunov played in the top three of midfielders, left and right winger, and even occasionally became a striker. But we will still focus on the central zone, since this is where the player feels most comfortable.

Two strong qualities for RPL: ​​confident dribbling and excellent adaptation to the fight

The Ufa midfielder is well balanced, and the two sides are especially well developed.

1) Auston has a very unusual dribbling, and one that organically looks just in the central zone, and not on the flank. Urunov perfectly covers the ball with his body – inaccessible for the opponent, twists his body, quickly kicks, plus the ball moves unpredictably. That is, there is no such thing that Urunov drew mainly in one direction.

It is important that dribbling is not used for the sake of dribbling itself (there are enough such players in Russia), but to get out of pressure and improve the position. With his skills, Urunov becomes a valuable player in the “build-up”, he knows how to take the ball, receiving it with his back to the other’s goal, set his back and not let the pressing opponent, boldly and confidently turn around, quickly move forward. 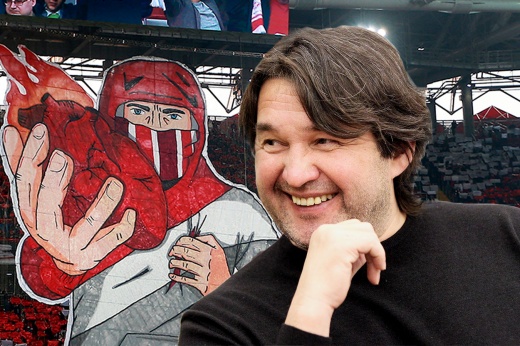 Who will drive Spartak now? The main thing to know about Shamil Gazizov

He understands how you can make money in football.

At Spartak, of the players with similar skills in the central zone, there is only Zobnin for today. Umyarov does not move with the ball under pressure, Kral tries, but does it averagely, Till is also mediocre in sharp moves and turns. In Urunov “Spartak” will find a footballer performing 8 dribbles in the center of the field in 90 minutes with a 55% success rate. This is an indicator of mastery, and it is the emergence of qualities that the team lacks.

2) Urunov is well adapted to the intensity and level of struggle in the RPL, he stably maintains the pace of episodes, looks for a fight, leads it well due to his strong constitution, quickly works with the ball and moves dynamically. 30-35 single combats per game is the norm for him.

With such qualities, in my opinion, it is optimal to play just in the center – either as the second defensive player or the eight, which quickly switches from attack to defense and vice versa.

For more attacking positions, Urunov needs to work towards increasing the specificity, it is lame both at the level of execution and at the level of decision-making. The blow is tight, but very unstable in accuracy and often unprepared. You have probably seen many times Urunov’s exits to dangerous positions in the RPL – and each time he lacked something for a goal.

You can blame it on bad luck, although in fact the problem is deeper – in performance. Below are the statistics of Urunov’s strikes throughout his professional career. Probably, not all matches of the championship of Uzbekistan were calculated, but the vector is still obvious. 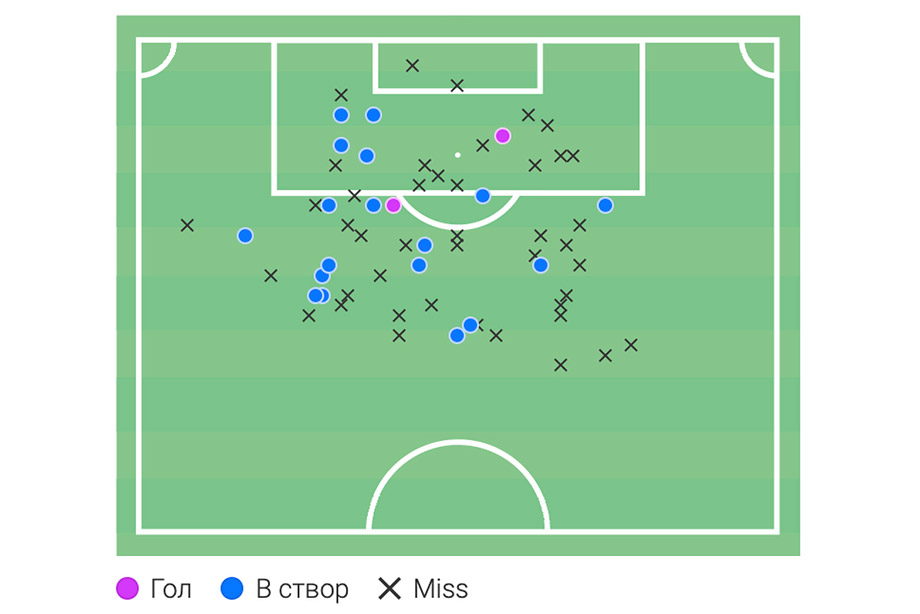 To date, only 2 of Auston’s 63 hits have ended in goals. And he hit the target 20 times. Lacking the unique qualities of a strike, Auston likes to shoot from a distance – and this is clearly not a plus in terms of assessing the player’s playing intelligence. The midfielder definitely needs to work on the specifics.

The same goes for playing along. Aggravating transmissions in 60-70% of episodes are not subtle enough. When going into a fast attack, sometimes after crazy dribbling, half of the time, wrong decisions. Even the last game against Dynamo was indicative for Urunov. On the 54th minute, a characteristic episode happened: the Uzbek footballer got out of the pressure, rushed along the flank from Igbun, shifted to the center, and then ruined the attack with a weak pass to an almost free partner.

Therefore, I would not put Urunov in higher positions, as I did not count on a star in attack and a performer of chances (at least for now). It is not bad, reliable and stable, but still a minor detail in the command mechanism.

That is why Urunov cannot be the main transfer of Spartak in the summer. An addition, a contribution to the future – yes, perhaps.

If Spartak takes Urunov, does this mean that one of the midfielders will leave?

So, most likely, Urunov in Spartak is being considered for the position of a central midfielder within the current 3-5-2 structure. Here the red-and-white already have Kral, Umyarov, Zobnin. Thiel can be viewed with limitations, he is still a more attacking player by calling.

From the table of comparison of qualities below it can be seen that Urunov has an overwhelming advantage over the Spartak trinity in dribbling and ball races (Progressive Runs), and also performs the most martial arts (largely due to strokes, they are also counted in this column). 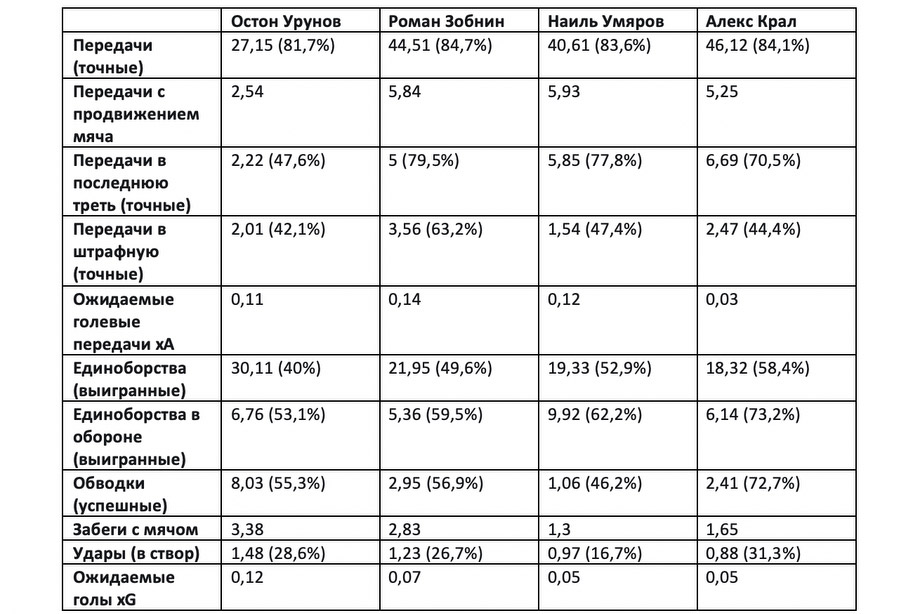 But as a dispatcher, Urunov is not at all impressive. The share of passes with ball advance is 9%. Lower than everyone else. There are few passes in the last third (and those that exist are not accurate enough), the supply of partners in the penalty area is also modest. Visual impressions completely coincide with statistical calculations: with all the undoubted advantages in independent movement and efficiency, today’s Urunov will not cure the Spartak structure, will not bring into it sharpening or at least just constructive transmissions.

Therefore, Spartak will still need one more player in the central zone – a creative and executive one. At least one like Vlašić. As for the “eights” with volume, there are already Kral and Zobnin. The arrival of Urunov is logical only in one case, if the leadership of the red and white have plans to sell Zobnin, which is somewhat similar to Auston in style.

I do not exclude this scenario: Roman has long been looking towards Europe, wants to progress and receive new challenges. Urunov is still below the level, but has the potential to add.

The figures in the media are different: someone talks about 3.5 million euros that Spartak will pay for the transfer, someone about 500 thousand, someone about the 2 + 2 format.

Of course, for half a million Ufa will not let the player go, the increase will be too small: for the spring-summer part of the RPL, Urunov not only quickly adapted to the RPL (thereby eliminating the standard for transfers item “adaptation risks”), but also increased in the level …

However, 3.5 million Uruns just cannot cost right now. Baseline data speaks against the high price: 1) the transfer market has weakened after the pandemic; 2) right now the footballer is a legionnaire, and it is not known how soon he will cease to be considered one. Uzbekistan is not a member of the EAEU, and the accession process may take a long time; 3) Urunov makes no difference on the pitch. He is reliable and stable, but impractical and vague in the final episodes.

Therefore, “Spartak”, of course, can acquire Urunov – and over time the player is able to grow in level and price. Only the approach to the transfer should be balanced. And most importantly, the management must remember that a player of this type, and even very young (that is, the same “student” as they already are) is not the highest priority target for the next transfer window.

Nazarov in vain refused to enter the KFOR. This would be the biggest hit of the season