From the editor. You are on the blog «DotA with a five-thousander», The author of which plays on 6k and is in the top 100 players on OD at Dotabuff. Subscribe to it and leave comments if you liked the guide!

This is my favorite hero, and, once there was a booze from cyber.sports.ru, I will share my thoughts, chips and, of course, just the objective strengths of this hero. Go!

OD – is who, what and with what it is eaten?

This is one of the non-metered “underground” heroes exclusively for amateurs (at least for now). His pick rate according to DB statistics is practically the rarest, and his win rate is 46.5%:

And they usually eat it with sluggish and slow, but very fat heroes, which we will talk about below.

Quick reference to Xeno – Why is Outworld Devourer really needed?

The hero is strong against any heroes who fulfill at least two of the four points below:

This is all possible mainly due to this beauty: 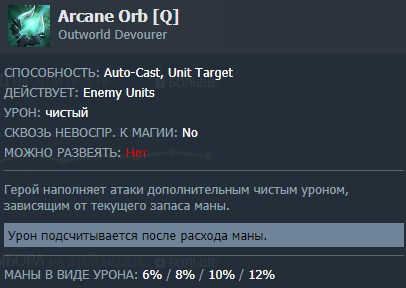 This is one of the few skills in Dota that hits with pure damage without a cooldown (not reduced by any resistances, be it to magic or to physical attacks). There is also the Impetus Enchi and the Glaves of the Silencera, and it is also worth remembering about the Spectra, but for its Desolate, conditions must be met. We don’t care how much health the hero has, sooner or later we will kill him. And we will also stack passive on it and blow up the rest of the heroes thanks to this.

Sharing a passive? Will we blow it up? What can this hero do? Analysis of the abilities of Outworld Devourer.

Orb, as mentioned above, allows us to hit heroes with pure damage. This is the main weapon of the OD after the lane stage. What allows you to survive lane? 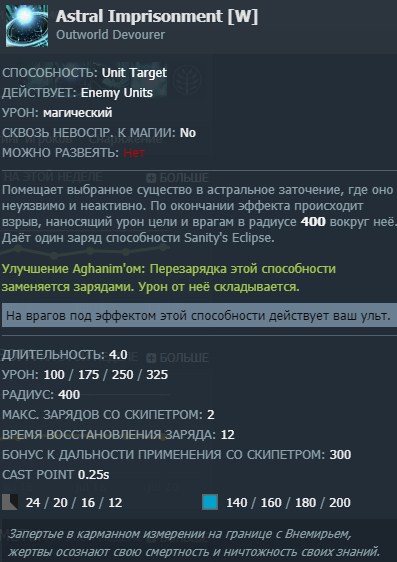 The second ability allows us to stand well in mid, along with a lot of base damage, hp and armor. This ability is not for harras, but for a comfortable last hit.… The tactics are simple – you hide the enemy when the enemy and / or your creeps are already low on HP, while the enemy in the Astral needs to deny their own (priority is the rengi), and the exit from the astral will provide you with an AoE last hit on enemy creeps. Also, you need to release the range from the first pack, hide the enemy and deny the range, as in the video.

And after laning, we hide heroes that prevent us from hitting or can save those we are focusing. In any fight priority for Orbital attacks and assassinations are crustal, so we hide supports that can prevent us from doing this. For example, Dazzle, Oracle, Bane and the like. Also, it may not be supports, but crust, usually of the third position, with important buttons – Mars, Phoenix, Centaur, and so on.

The skill has both active and passive components:

Thanks to the passive on the lane, we can spam the astral plane almost endlessly. And in the mid-late game, endlessly beat the heroes with an orb, since mana does not end.

Thanks to the active, at any stage, we can slow down fat heroes and prevent them from leaving with the help of the Hit-and-Run mechanics (you can find out what this is in the guide from the NS).

Moving on to the juiciest one – the ultimate 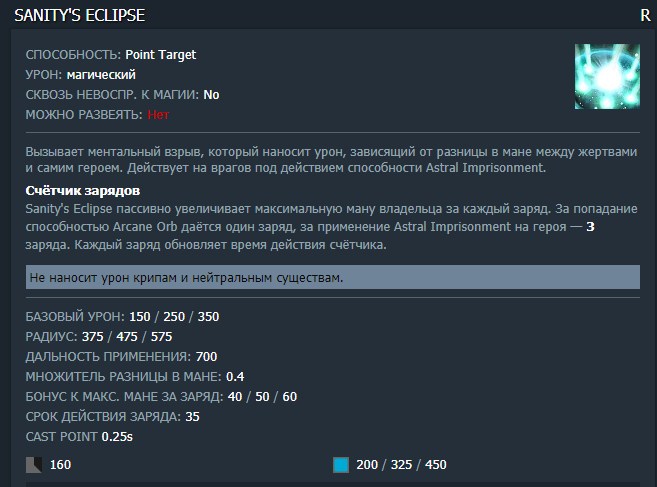 There is a lot of text here. Ultimate also has an active and passive effect:

With the receipt of the ultimate in the mid lane, you can start aggression if the enemy hero is not our counter-pick. Until the sixth level, OD poses no threat, but after it is a killing machine. Change your gameplay immediately, as soon as you get the ultimate, play around it. By the way, this is a tip for playing any hero 🙂

And in the mid-late game, the application is simple – we stack demage and blow up the hero. If we hit the core, but we don’t kill for the hex, we do not regret the ultimate in one hero.

We understood how the skills work. What kind of build and talent does Outworld Devourer have?

Everything is almost always the same here, with the exception of one factor – we are playing against a counter-pick or is it a convenient line-up in the mid lane. Maxim is always Astral… If this is a convenient match-up for us, the buildup Astral – Flux – Astral – Orb. Thanks to the 7.27b update, Orb can be pumped earlier than level 8, since it costs 80 mana, not 120. This is a very large hero up.

Then we finish off the Astral, then we evaporate into the flux. Ult never skip.

Orb at level 4 we do not use, only with the receipt of the ultimate. On the sixth, this will allow us to make a frag on the heroes without escaping, as in the video below.

As I said in the video, don’t forget about the Astral counter. It lasts 4 seconds. If you want to kill the hero, pretend to step back. And when there are 1-2 seconds left, come close. This is done to prevent enemy supports from pressing save-tp to mid. And the enemy midleader himself did not expect that you would start an aggression right now. The element of surprise is one of the most important aspects of Dota 🙂

Everything is simple here. Always attack speed at 10, always multiplayer from ult to 20 and always damage from orb at 25. Talents are never skipped by 10 and 15, they are more important than skill points. 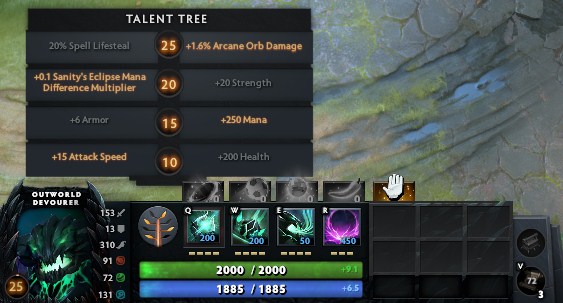 There is only one exception. Note the enemy peak at level 15. If there is a lot of physical damage against you, for example, there is more than one hero from the list of Meepo, Clinkz, Phantomka, Beast, Lycan, Jager and the like, then it is better to take +6 armor.

What to buy? Itembuilds Outworld Devourer

The initial purchase is default.

Then we go to two zeros and PT.

And then there are already three options for the development of events. You need to ask yourself three questions:

Accordingly, if the answer to the first question is yes, we need ketch, then we go to Orchid. At 7.27, he got a good boost and he gives everything that our hero needs – attack speed, intelligence and, of course, an asset that allows us to erase any hero from the map in 5 seconds. The build looks like this:

If the enemy heroes do not have heroes against whom you need a fast orchid and you have a vacuum-cleaning forest of kor, for example, Anti-Mage, Naga and the like, then you go to the Aghanim build. Including you go into it, if there are many heroes against you, from whom you need to save allies, such as the LC. The build looks like this:

The choice between Hex and Shiva you make based on the number of heroes hitting from the enemy team and the lack of control in your pick. You are more of a support than a demage dealer in this build when it comes to Hex / Shiva picks, keep in mind.

And, if you do not have farming cows at the peak, then you can safely proclaim yourself as position one and go to my own build. Looks like that:

In this build, the farming speed increases many times, due to which by the 28th minute you will have Blink after Hex. With the purchase of a Bkb, you can force good fights. I do not recommend this build in cases where you are under pressure or you have lost all lanes – only and only when the game is equal and you have time to farm. Your hero cannot go and finish the game quickly. And the choice between Refresher and Munshard depends on whether you need to pick up one target faster or you lack control, Bkb is already small and maybe you need another ult?

A short guide to gameplay after buying core items

When you already have a Hex and / or Orchid, your task is to look for enemy cows. 90% of the heroes in Dota with an equal game die for Hex, 100% of heroes for Hex and Ultimate. Do not give space and life to the cores, look for them, make pikoffs, open the enemy forest for your core and push towers at the expense of this. If you play through Aghanim, always run 4 + 1 after your core and impose protracted fights so that you can deploy passive and detonate supports in one ultimate.

You mentioned counter-picks there somehow. Is it possible in more detail?

Of course 🙂 I made a table. Explanations to it:

The blue color is responsible for how comfortable it is to stand against this hero in the mid:

Green is responsible for how we play against this hero in the game as a whole: 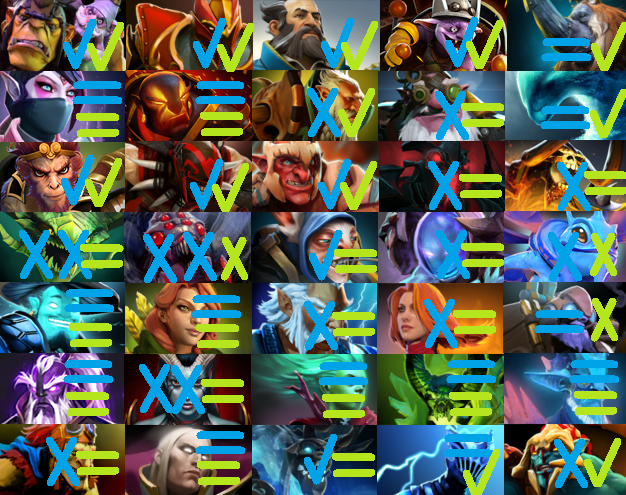 That’s all. If you forgot something or you have questions, I will be glad to answer in the comments. Happy skating rink and good mood! : 3

Our Birds of Prey: Choosing Harley Quinn Belsport! – Girl of the Day – Blogs

The presenter of the weather on the channel “Spas”, at the sight of which we are overcome by sinful thoughts