The Golden Boot -2020 is a complete failure. Lewandowski will suffer from different treatment of penalties in the Bundesliga and Serie A – Hello – Blogs

After Ciro Immobile’s hat-trick against Verona, the wheelhouse for the Golden Boot (the prize for the best scorer in European leagues; goals in the top 5 leagues are multiplied by 2, in 6-21 – by 1.5, 22 and below – by 1) to a new level. There are three realistic contenders left – Robert Lewandowski, whose season is over, Ciro Immobile and Cristiano Ronaldo, who have two rounds left.

Previously, in this situation, the players shared the award, but recently they agreed that with the same number of goals, the player who played less than minutes wins.

The winner is still Lewandowski right now, but Immobile and Ronaldo (who have already played more) have two more matches to beat him. Cristiano is an outsider of the race (4 goals are needed, provided that Immobile does not score), but Ciro’s chances are simply gorgeous. He only needs one ball, and the opponents are Brescia (a double for Immobile in the first round) and Napoli (one goal from Ciro in the first round).

The described situation brings it closer to a potential scandal. To understand what’s wrong, you need to look a little further than the classic Golden Boot table with only goals and points. Let’s add additional data: minutes played, goals, goals excluding penalties, goals without penalties in terms of 90 minutes… 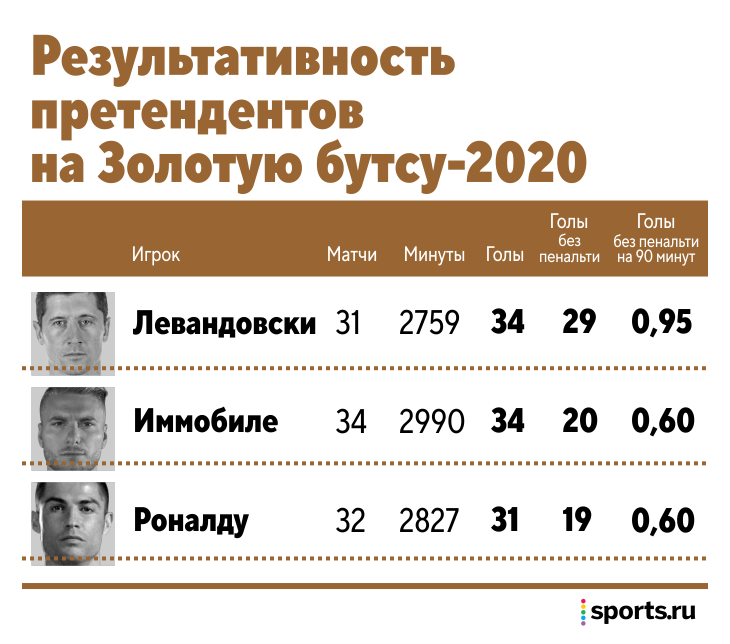 I think you have already guessed why these metrics are so important. This display shows the dependence on penalties and a clear difference in the level of net performance – two just good seasons and one super top (for a specific indicator, we are not comparing the overall level of the game).

If we take the top 5, then according to this key performance indicator, Lewandowski is 1st, and Ronaldo and Immobile share 14-15th places. Never before have penalties played such a role for Golden Boot… And the point is not even a situation when one player slightly benefits from the fact that he hits hard from the point (this would just be normal): the difference here is super heavy, and each of the three contenders hits a penalty perfectly.

This brings us to the questions: How appropriate is it in general to use a penalty when presenting an award? Shouldn’t they be considered differently?

For example, in selection in those rare cases when you need to look at the player’s performance for the primary filters, practically no one looks at all the goals anymore. It is standard practice to waive penalties and recount for 90 minutes… And it is absolutely justified. Penalty goals are poorly carried over from season to season, depend on who is on staff, and have little to do with a top striker’s skill set – it’s better to score just without them.

In the pop bounty, it was okay until the season came, which revealed all the flaws of the method. Now, perhaps, even here it is inappropriate. 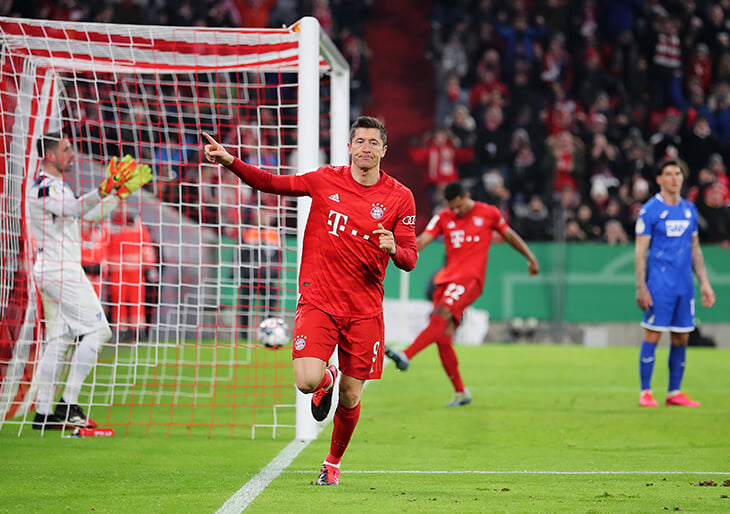 The argument “you still need to be able to implement a penalty” does not work:

1. This is another skill, which is not related to opening, getting chances and implementing difficult chances;

2. The number of penalties is unstable and does not carry over from season to season;

3. In this particular case, the point is definitely not in the skill of implementing punches from the point – Ronaldo and Immobile have one miss in Serie A, but Lewandowski has 100% implementation. The point is only how many who were given a penalty.

And this is where the fun begins. Ronaldo and Immobile benefit not from the successful distribution of the 11-meter in a particular year, but from the characteristics of the leagues… In the Bundesliga, on average, 0.25 penalties are given per game (roughly speaking, 2-3 penalties in 10 matches), in Serie A – 0.49 (five penalties in 10 matches). The Serie A score is by far the highest in Europe.

Perhaps it will be more convenient for someone to digest the difference in absolute values ​​(although for comparison this is not entirely correct): completed Bundesliga season – 73 penalties; Italy two rounds before the finish – 177 penalties. That is, Ronaldo and Immobile, regardless of the style of the teams, luck in a particular season and other objective factors, are twice as likely to get to the point in each specific match than Lewandowski. AND Robert was guilty only by playing in a league where episodes in the penalty area are sensibly interpreted… The coefficient remains the same – no adaptations are made on the penalty shootout.

Such an abyss is impossible without a systemic difference in interpretations. Where do these Italian penalties come from? My version: a special attitude towards episodes with the ball hitting the hand (in the last rounds the phenomenon reached its peak). In Italy, hitting the hand and playing with the hand merged into a single concept, which is absurd (and definitely incorrect in relation to other leagues, if we need to make a comparison, but in the case of a blindfold, it is necessary). 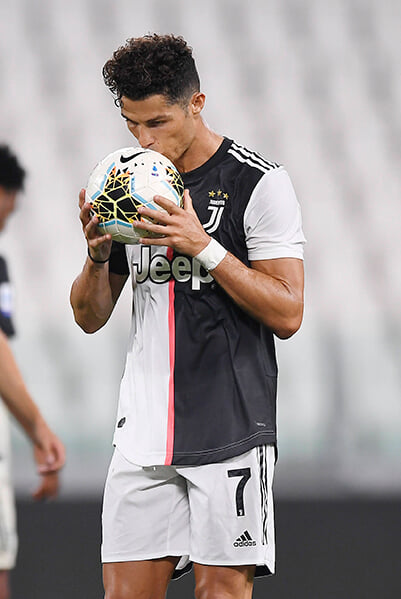 I do not insist on such a version, but the existence of a gigantic difference is a fact. Italy this season has an abnormally high rate not only in relation to other leagues, but also itself last year.

This is the difference between super top in fiery form and just a good season of a great player. And all because of the absolutely unequal starting conditions.

There was always a problem, but here all the weaknesses were exposed: Lewandowski played the most powerful season in the Bundesliga, where there are fewer matches and it is more difficult to win the Golden Boot. In one of the leagues, at the system level, a penalty is interpreted differently. He is being pursued by players from this league of penalties that were not even close to his level.

The problem is easily solved. The first solution. Gikovsky – to give the Golden Boot for performance in terms of 90 minutes, excluding penalties… The only thing: you need to introduce a filter – the player must play at least half of the total playing time so that the player does not accidentally win with one goal and one substitution. Otherwise, this is the fairest path, albeit a little more difficult than the current system. This is what the table for this season would look like: 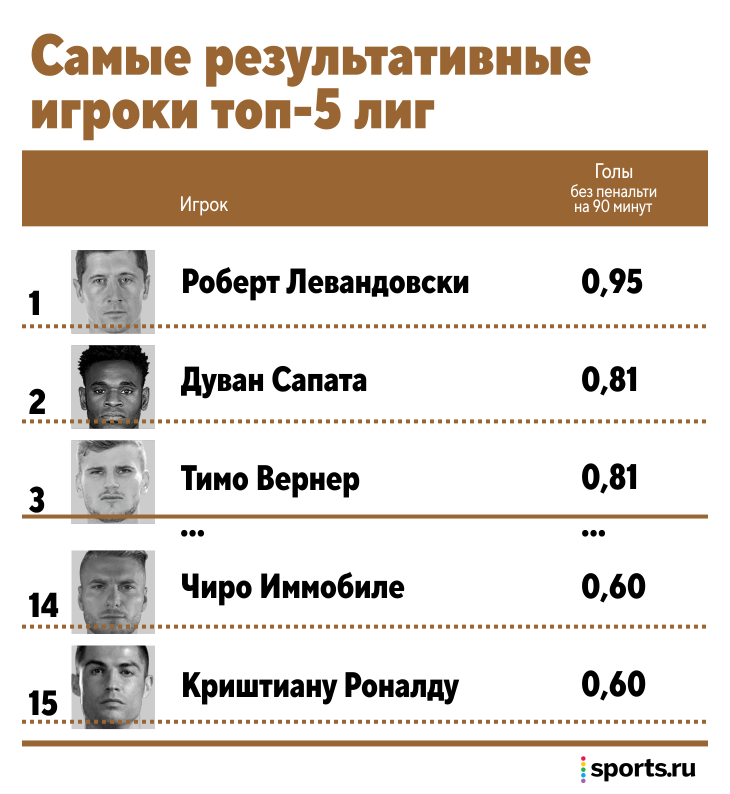 The geek part can be simplified and dropped. We leave goals, not performance as the main figure, but count goals from a penalty kick in a special way… For example, goals without penalties are scored according to the standard odds – 2 (for the top 5 of the league). And from the penalty spot it is twice less – that is, 1 for the top league. This is what the table would look like: 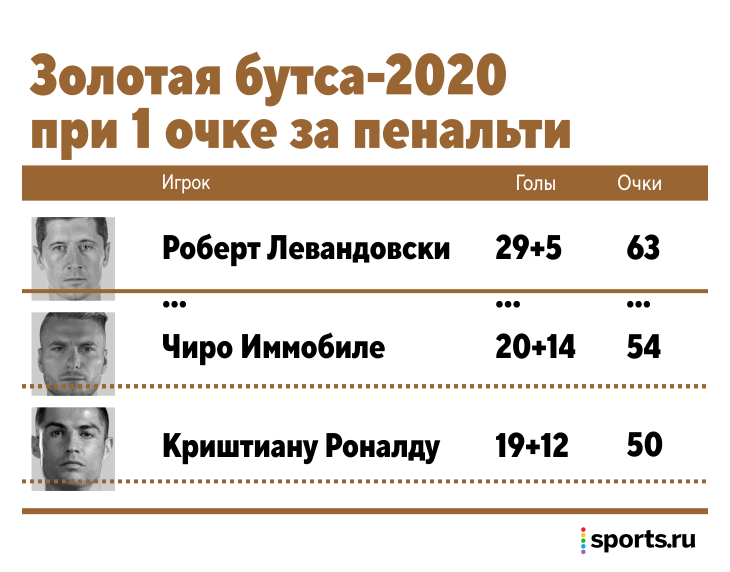 I revealed the same problem in a fresh video. Not every video is fully transcribed, so subscribe to the channel (if you are interested in such reflections):

“I don’t think Lovren will be much better than Ivanovich.” Byshovets – about the newcomer “Zenith”