The KHL is considering only one option for the start of the season. She has no other options

League does not give any specifics. 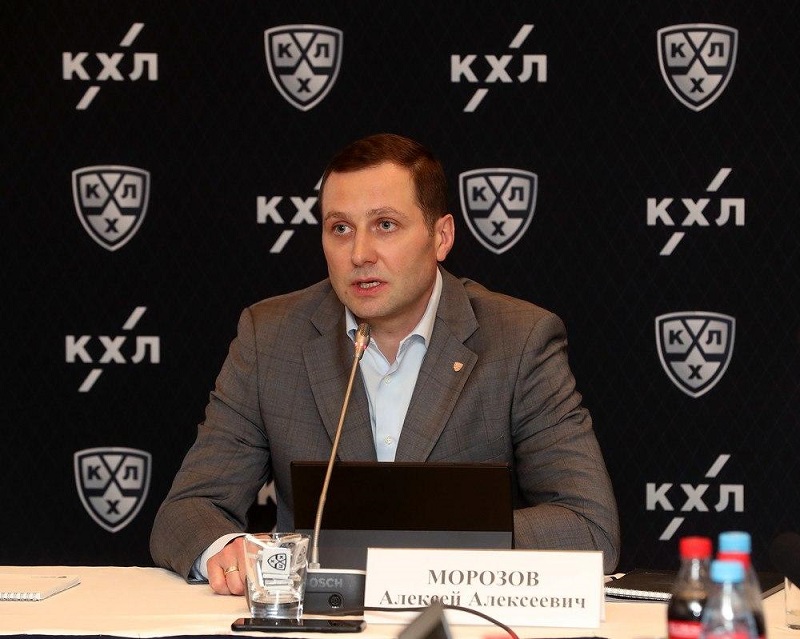 Alexey Morozov in a recent interview, talked about the league’s plans to resume the season. In short, there are six people infected with coronavirus in the League, but the KHL will take all measures to prevent the spread of the virus. In particular, it is said about the development and approval of a special document with Rospotrebnadzor, which will act as an addition to the KHL regulations.

The KHL President says that this document has worked out all the aspects that may affect the life of clubs in terms of training and game processes. True, what alternative measures will be taken is not explained.

“Barys” no longer fits into the pre-season training plan

This is all very cool, but the most important thing is holding a stable tournament. The League plans to start the season on September 2, but already, for example, Kazakhstan has introduced quarantine, which will last until August 2. Now all the Russian teams have started training camp, and the Barys players did not even get up on the ice. The Kazakhstani team does not meet the initial pre-season training. In addition, the “Cup of the President of the Republic of Kazakhstan” was canceled, although at the time of the interview, the president of the KHL was sure that this tournament would take place.

The general manager of “Barys” Vyacheslav Belan said in an interview with our website that the process of preparing for the season of the players should be planned. That is, the club from Nur-Sultan will be physically less ready for the upcoming season than its rivals.

With the KHL fans, everything will be decided – either 10%, or no one at all, or full stands. But the jurisdiction of the KHL is not only Russia, but also Belarus, Latvia, Finland, Kazakhstan and China, so the issue of attendance was given to the clubs to decide.

Kunlun has already announced that it will be based in Mytishchi. Belarus also does not raise questions in terms of participation – something extraordinary must happen there in order to introduce an emergency regime. Three countries are under attack – Latvia, Kazakhstan and Finland. The last two even refused to continue the Gagarin Cup-2020. Not because they were afraid, they just closed the entrance and exit in these republics, plus the hockey players worried about their relatives and wanted to be with their family at that difficult time. According to Iltalehti, the KHL is now recommending Dinamo Riga to follow the example of Kunlun and also move to Russia.

Beijing will be hosting IIHF World Championship events involving China’s men and women in 2021. The men’s team will contest Division IIA of the World Championship from April 10-16, 2021. China will face off against Australia, Croatia, Israel, the Netherlands and Spain … This tournament was originally scheduled for April 2020 in Zagreb, Croatia, but had to be canceled due to the pandemic and has been moved to Beijing to help the preparations for the Games #KRS #RedStarHockey #ChinaHockey ••• 🇷🇺 It has long been a tradition in many sports to trust the right to host major competitions to host countries of future Olympics. For them, this is a great opportunity to check the readiness of the organizers, test the sports facilities in working mode, and at the same time make it clear to the audience what awaits them in the near future. The Beijing public will receive a great portion of hockey as a tasting next spring. The Men’s World Championship in Division IIA will take place on April 10-16. The rivals of the Chinese will be the national teams of Australia, Israel, the Netherlands, Spain and Croatia. It was Croatia that was supposed to host the competitions in Zagreb this year, but due to the pandemic, as you know, they were canceled. #kunlunredstar

Latvia and Finland bring large incomes to the KHL due to a higher standard of living and, accordingly, high prices for TV rights. Let’s take a certain probability that the second wave of coronavirus will come in the fall. What to do in this case and how will the KHL act?

The KHL will have several options for continuing the tournament

In fact, with the emergence of a new wave of coronavirus, the KHL will have to proceed from several options: the first is to suspend the championship for an indefinite time, the second is to change the structure of the tournament with hub cities (as was done in the NHL), and the third is to continue the tournament without foreign teams.

The imperative methods work very strictly and if everything is very clear with Russia – hockey players will simply pass tests before each game and play matches without spectators, then with the decree of the Government of other countries it will be quite difficult, since international flights will simply be closed.

Dinamo Riga has a minimum budget, if forced to be based in Russia, the club will have to pay for the hotel and so on. Naturally, this is not beneficial to the team from the capital of Latvia, which makes ends meet every season. Ideally, the League’s management should take measures to pay over the planned costs to foreign clubs.

There is also the fourth – the most conservative option – the cancellation of the 2020/2021 season. This one also needs to be considered. At any moment, the money that should have gone to the team can go sharply to the needs of the population. And this is normal and fair. Most KHL clubs live on public funds and money, usually, is allocated from the general regional or national funds, which go not only to sports, but also to other industries that are important for residents. Even oligarch companies lose a lot of money in the era of a pandemic, for example, Gazprom suffered a quarterly loss for the first time since 2015. The KHL president did not speak about all of the above. That is, the KHL announced only plan A, but plans B, C, D and so on are missing. Yes, they talk about them, but abstractly – there is no detail, as well as clarity.

At the same time, according to sources, the participation of “Vityaz” (hockey players agreed to a decrease in wages by 20%) and “Amur” are questionable. Salavat Yulaev is also suffering – sources say that Bashneft has stopped contributions to the local regional fund. And at the very beginning of the pandemic, the “Admiral” fell off.

Official appeal to the fans Dear sports fans, fans of HC “Admiral” and people who are simply not indifferent to the fate of our club! You all know how the coronavirus pandemic has affected the whole world, our country, Russian and regional sports. And many of you are bitter about this situation. We assure you that all of us – hockey players and Admiral employees – share your feelings. Hockey is our life. But it is in such a situation that we should rally. Recently, a lot of creative folk art has appeared on the network in support of the club, which further destabilizes the situation around our team. We consider it necessary to remind you that all the funds that were provided for financing professional sports will be transferred to the Primorye reserve fund for measures to combat the spread of coronavirus. Human lives and health are top priority. If refusal to perform in the KHL will save at least one person, we are sure that this measure was not taken in vain. We emphasize that there can be no question of closing the club. Having missed one season, we will return to the KHL, this is our duty to the fans! Now it is important for all of us to withstand the threat of an epidemic, while preserving the most important thing – children’s and youth sports. The youth sports school “Admiral” remains and will continue to operate, in which more than 300 Primorye children of 10 ages train. Graduates of the youth sports school “Admiral” – the team of the Junior League U-18 and the youth team “Typhoon” – will continue to play in their championships. We will do our best so that during this time the Primorye youth will become stronger and prepared to perform at a higher level. We were supported by the silver medalist of the Olympic Games, multiple world and European champion in rowing and canoeing, Honored Master of Sports, Ivan Shtyl: “In this situation, you can only treat what is happening with understanding. All spheres have suffered, and sport is no exception. species and others. This measure is very serious, and to some extent fateful. It will affect both athletes and sports in general. I would like, of course, that this crisis does not last long. ” Thus, we urge you not to panic and be patient. Take care of yourself!

The KHL must inform not only clubs and players, but also fans. Everyone misses hockey and wants to know the plan – how the League will act in one case or another. The KHL is simply obliged to detail each scenario and, based on the principle of publicity, announce it. Foreign teams in the current situation are in the most difficult, incomprehensible and depressing situation.

Karpaty have applied to FIFA regarding the debt of River Plate for Carrascal. CSKA is interested in the player