there was a period when he combined matches for “Barys”, “Astana” and “Torpedo”

– a young striker “Nomad”. He has 21 (12 + 9) points in 53 matches. In addition, the hockey player became the most useful striker of the Nur-Sultan team this season. Sayan’s brother Samat Daniyar also plays in the Barys system.

In his interview, Sayan told how he started playing hockey, how he managed to combine matches of the youth and men’s level in the championship of Kazakhstan, and much more. 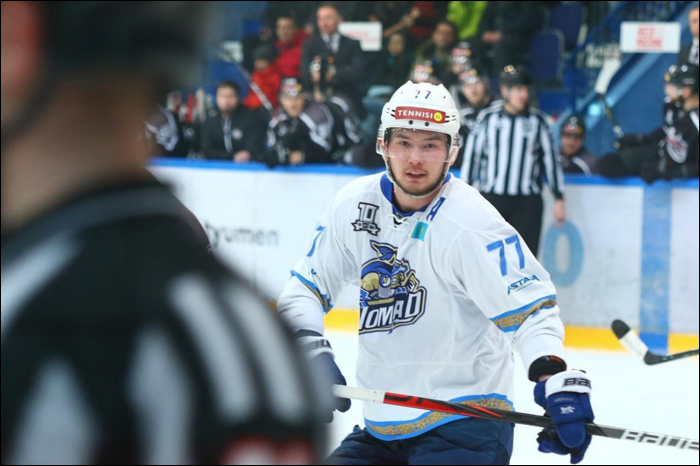 – Sayan, hello. Are you mentally ready for the new season?

– Hi, of course I’m ready. In quarantine, I did it myself, then I rode at the camp with the guys in the group. Unfortunately, due to the situation with the coronavirus in Kazakhstan, these fees have stopped. All ice rinks are now closed – we are studying at home.

– You graduated from university this year, right?

– Yes, this year I graduated from the Buketov Karaganda State University. He studied for four years in the specialty “physical culture and sports”.

– How did you defend your diploma?

– We defended him online by videoconference.

– How did you start playing hockey?

– We were three or four years old with my brother – our parents put us on skates. In the hockey section there was a recruitment, they gathered children born in 1998-99. My brother and I have been training since 1998, then we stayed in this team.

– Have you played in Astana all your life?

– Yes, it turns out that way. When we graduated in 1998, we played in the UHL. We had a period when we played for “Barys” born in 1999 and for “Astana”. We also combined games for “Torpedo” from Ust-Kamenogorsk in the UHL, because this team was the base team for the junior world championship when we played in Belarus in group A.

– Yes, we then flew to Germany for the World Youth Championship, when the elders were born in 1997. Then three of us were invited to the training camp from 1999 of birth – me, my brother and Valery Orekhov.

– Do you feel the difference in age at such moments?

– We played a season for “Astana” – this is already an adult level. We can say that the cones were stuffed there. There were no difficulties. You are going to represent your country.

– With the Kazakhstan national team in 1998, you went to the junior world championship.

– Yes, then we went to Belarus. The age difference was also not felt. At the first match, there was a kind of tremor, as you go to the World Cup. But after him everything became calmer.

– You play with your brother on the same team. How does it feel?

– We have been together since childhood, we also began to walk at the same time. Well, it’s always easier to play together, because I understand him perfectly, and he also understands me. It’s very cool to play with him!

– You played in the youth teams of Kazakhstan – are there any differences from the MHL?

– We have very few teams in the championship in Kazakhstan. There were only 5 or 6 teams for juniors. The main rivalry was between four: “Torpedo” Ust-Kamenogorsk, “Youth” Karaganda, “Barys” Astana and “Irtysh” Pavlodar. I cannot name the differences, because I was still playing at that time in the men’s championship of Kazakhstan. So the transition to the JHL was easy. When they graduated, it was difficult to get used to the adult level – the first half of the season was hard.

– Is the difference between the VHL and the championship of Kazakhstan big? In Kazakhstan, “Nomad” dominated, and this season the VHL did not make it to the playoffs.

– “Nomad” was three years in a row in the final of the championship of Kazakhstan, but the backbone of the team was then older. This year in the VHL the club has rejuvenated a lot. Few guys remained from the previous line-up – about 7 people. The rest of the guys born in 1999, even the guys in 2001, were involved. 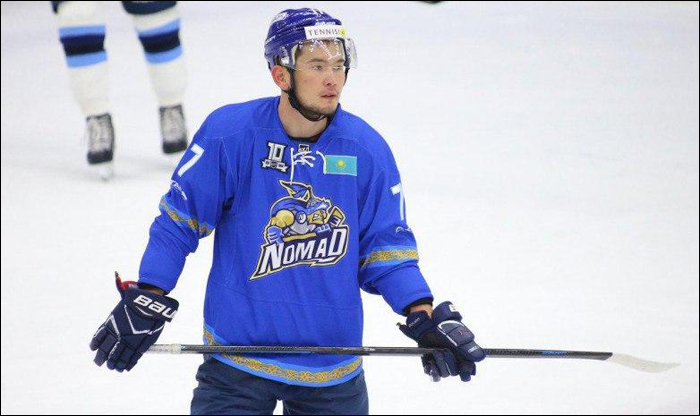 – Is it possible to say that youth is one of the reasons why you could not enter the Cup eight in your conference?

– Many guys have moved from the MHL. This may have played a role, but we had good preparation for the season. In some moments there were offensive defeats, we lost many matches with a goal difference. I think if at the beginning of the season they showed the same hockey that at the end and in the middle of the regular season, then it would be easy to compete for the playoffs.

– It turns out that at the beginning of the season you had three factors: rejuvenation, adaptation and a change in the core of the team?

– I think only adaptation. It is needed by all players who spend their first season in the league. The team has taken a step forward – now playing in the VHL. All the same, the level is different. In the championship of Kazakhstan, 5-6 teams also fight among themselves, and in the VHL all teams are serious and equal.

– Did you play in the “Nomad” according to the main team system?

– Yes, the whole system played according to the main methods; not only in the VHL, but also in the MHL.

– Next season Barys will be coached by Yuri Mikhailis, who has been in the club’s system for a long time. He coached Nomad last season. How great is it that a person who knows all the youth is now coaching the main team?

– It is very good that the team will be trained by a Kazakh specialist. He has already given an interview in which he said that he would attract a lot of young guys. Yuri Vladimirovich knows all the youth, he will be able to put young hockey players on the right path – he will tell you where and how to play correctly. 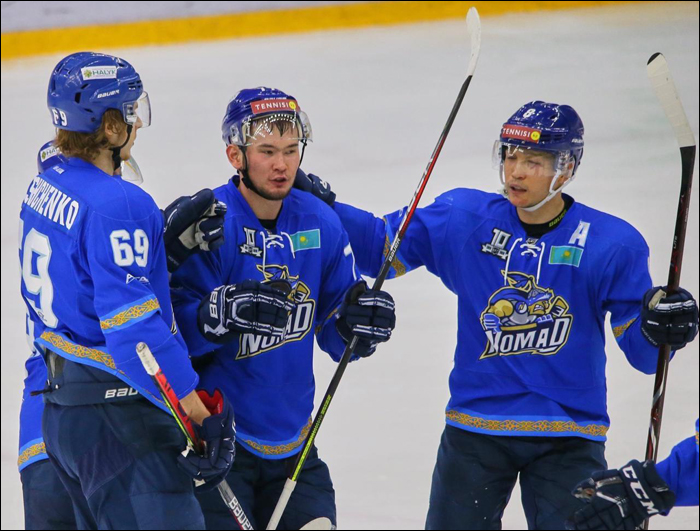 – That is, if you are promoted to Barys, then you will already know the coach’s requirements?

– Yes of course. And the coach knows perfectly well what you are.

– You had a good season in terms of points. How did you manage to achieve such statistics?

– It was difficult to play at the beginning of the season. Then I was put on the same link with Talgat Zhailauov and Yaroslav Evdokimov. It turned out to play with them, somewhere they prompted me, helped me.

– Talgat is an experienced player. Sharing your knowledge?

– Yes, it always suggests where to play correctly. I always listen to the opinion of my elders, and Talgat played and plays at a high level, many people know and respect him.

– Does it motivate you that Barys gives way to young people? This season, a lot of young guys were played in the KHL and you in particular.

– Yes, we flew to the Far East for the final regular season games. Any athlete is motivated when you are “raised” to the main team, they give you a chance to prove yourself.

– What is the main goal when you are called up to the KHL?

– Prove that you are worthy of the main team, that you can play in this league. But you also prove to yourself that you are not standing still, but growing and progressing. If you are connected, it means that they trust you.

– This season you managed to play in the MHL, VHL and KHL. How would you rate this season for yourself?

– Positively. In the VHL played almost all the matches, in addition to the game with “Toros”. In the KHL at the end they hooked up. And when we had pauses, we did not sit idle – we were “lowered” to the MHL, and we helped the guys there. The season was very productive, I’m happy! 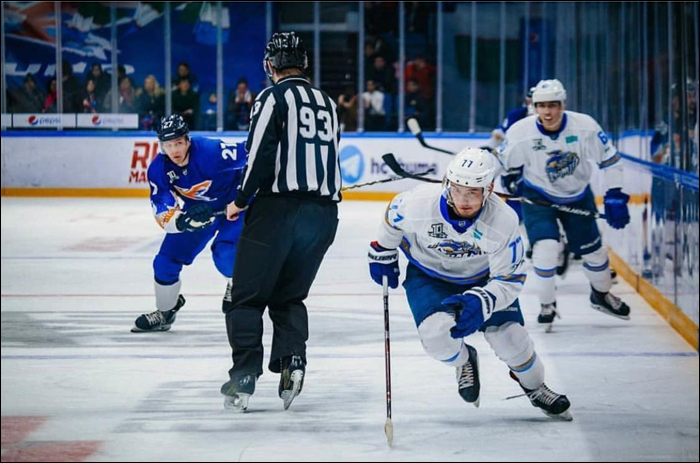 Rogerio Nogueira confirmed that he will end his career after the fight with Rua “All about MMA, mixed martial arts, mixfight, ultimate fighting – bloodandsweat.ru

“There was an intrigue, Khimki was not quite enough.” Dyukov spoke about the Cup final match