Truckers-2 is a great game from Russia. “Aria” was playing there, drugs were planted instead of cargo, and traffic cops took bribes – Bulletin of the offline – Blogs

It is immediately clear about some games – they are from Russia: remember “Pestilence”, “Allods”, the fifth “Heroes”. The same story with the second “Truckers” – a game by the Novosibirsk studio SoftLab-NSK, released in 2001. The first part – “Truckers: The Path to Victory” – was released in 1998 and was more like a racing simulator, the free world of the second part had not yet existed. 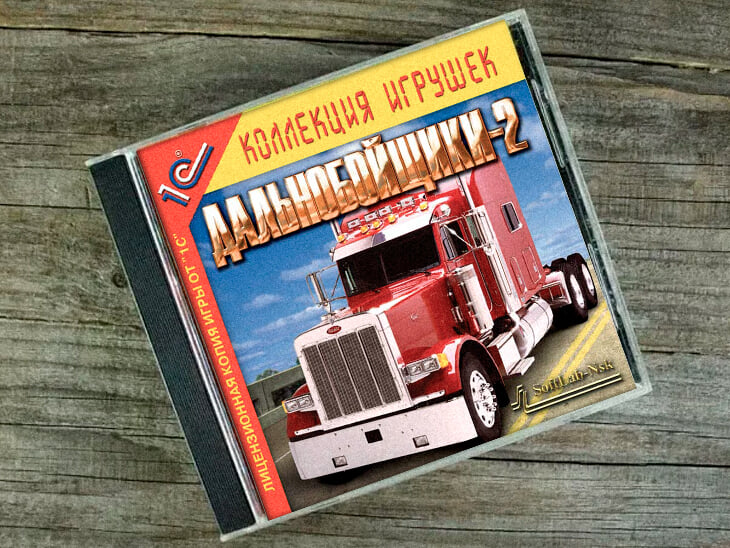 Truckers 2 is closer to spaceship simulators like Elite 3. Open world, freedom of action and only one goal, the path to which everyone determined himself. Plus a fairly advanced simulation of the economy and the scenery of the post-Soviet outback. “D-2” became classics, in a few years the Russian “Space Rangers” and Ex Machina will become the development of the ideas laid down by SoftLab-NSK.

The basis for the success of the game is an open and rather big world, created from towns where some products are in short supply, and others are in abundance. Buy cheaper, sell more – the main principle of real trading is valid here as well. This is the essence of the second “Truckers”.

The rest is just details. But it is they who create immersiveness, animate pixel textures stretched over the code. An example is the need to monitor the fuel level. A careless newcomer who gets behind the wheel for the first time will shove through forests and fields on one tank and get stuck somewhere in the middle of the taiga. A seasoned long-distance ranger will set off on a flight with a full tank and along well-known roads, constantly refueling, because it is not known when you will see the next gas station and how the attempt to make a kilometer detour will end.

Now let us explain in more detail what the greatness of the second “Truckers” is.

Truckers-2 is a hymn to capitalism: we need to take the market and compete for labor

Basically, the player sits behind the wheel, but the final goal of the D-2 is to conquer the market. This requires your own company, a staff of drivers and new equipment. By the middle of the game, you will also have to deal with management, without interrupting the control of a multi-ton tractor.

Capitalism in Truckers 2 is wild because the game was created at a difficult time for Russia. Default, rampant crime, conflicts. It was very difficult for a person without connections to build a business – these difficulties were carefully, albeit with some amendments, transferred to the game.

First of all, we are faced with competition in the delivery of goods. Each order besides us is taken by several more drivers. Only the one who brings the goods first will receive the money. 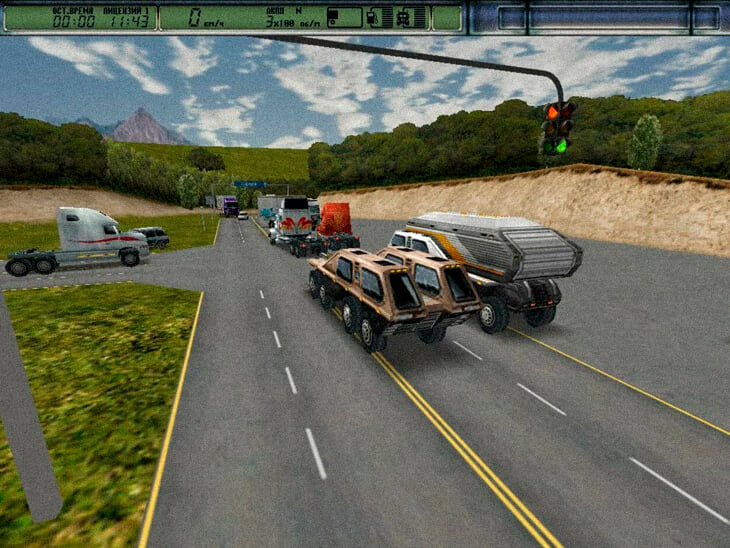 Competition for labor is equally important. We are not the only ones who are so smart and can create our own company. Everyone needs good drivers. There are enough of them in the game, but for hiring you need licenses, which can only be obtained by delivering the goods very first. The cruel world of regional transportation does not accept compromises.

You can give bribes to traffic cops, and also the mafia on the roads

All means are good in the competition. Even if you are not a genius driver, there are other ways to come first – for example, contact the traffic cops. They perform their main functions regularly: a fine for driving on a red line or crossing a solid line is guaranteed to you. But this is the most boring part of their job. Some inspectors accept bribes – this can provide a competitor with eternal searches. But this is at your own peril and risk, honest policemen come across who will increase your fine for such an offer.

Competition works both ways. You may be stopped to inspect the cargo. In the worst case, instead of drugs, you will find a full body of drugs that you had no idea about. Therefore, in addition to trifles for bribes to traffic cops, it is worth carrying a special cargo scanner with you, which is able to save the driver from a dangerous order. 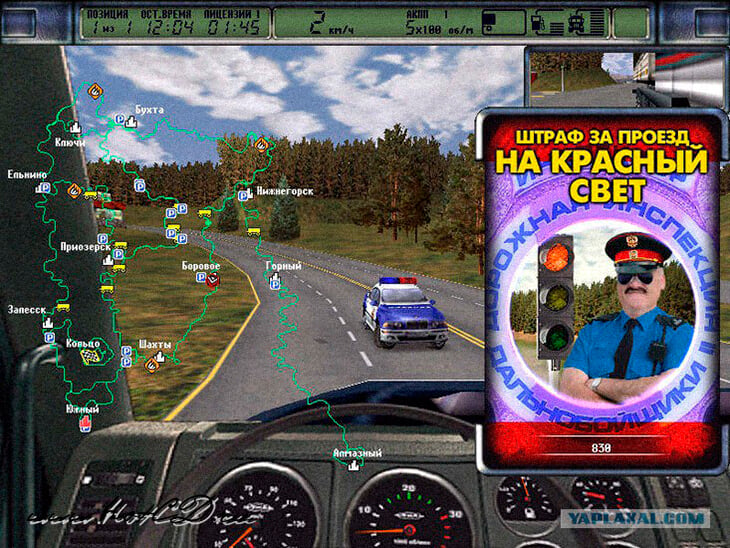 Well, where is it without organized crime. Bandits can eliminate your competitors, or they can eliminate you. Carrying too expensive cargo – robbery, cut brother’s black jeep – robbery, boring – robbery. And the more valuable the cargo, the more likely it is to attract the attention of the mafia. Both a banal ransom and an agreement with the traffic cops about protection will help protect against them.

It is interesting to study the world: underground tunnels, detours. If it’s broken, the radio will help

When the drivers are on the flights, the traffic cops are fed, and the lads are calm, the usual work remains – transportation. The developers have tried: the trips will surprise you until the very end of the game. The most interesting thing is to look for shortcuts. It is quite possible to find a gap in the familiar forest belt after 20 hours in the D-2, which will allow you to turn onto a parallel road a couple of kilometers earlier. There are even whole underground tunnels that are not marked on the map. Finding one is pure delight. 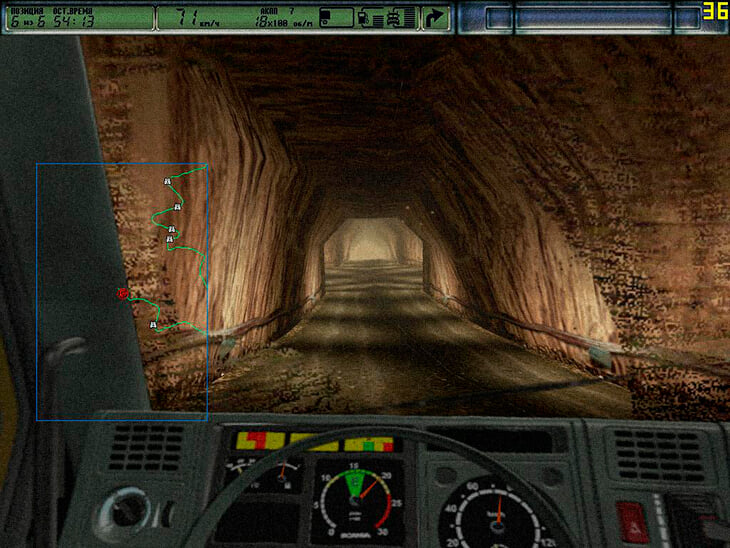 True, you can cut and damage or even overturn the car. Then a walkie-talkie will help, with which you can ask passing drivers to help with repairs or gasoline for a small reward. They will almost always agree – they do not abandon them on the road in trouble.

A walkie-talkie is generally a very useful item. With her, you can talk to NPCs on the roads, negotiate with the criminals in advance, fix the car, or even buy a new one. Or you can contact an opponent in the delivery of the cargo and convince him to abandon the task for a certain fee. It is unlikely to agree, but sometimes she gets lucky.

In addition to the main quest, you can deal with the delivery of special cargoes scattered around the map in random places. Another entertainment is racing. Competitions are held on the “Koltso” track, for the victory in which they give money, but what is much more important – licenses (from one to three). It is quite a common situation: at full speed, turn a full truck through a double solid in order to be in time for the next arrival. 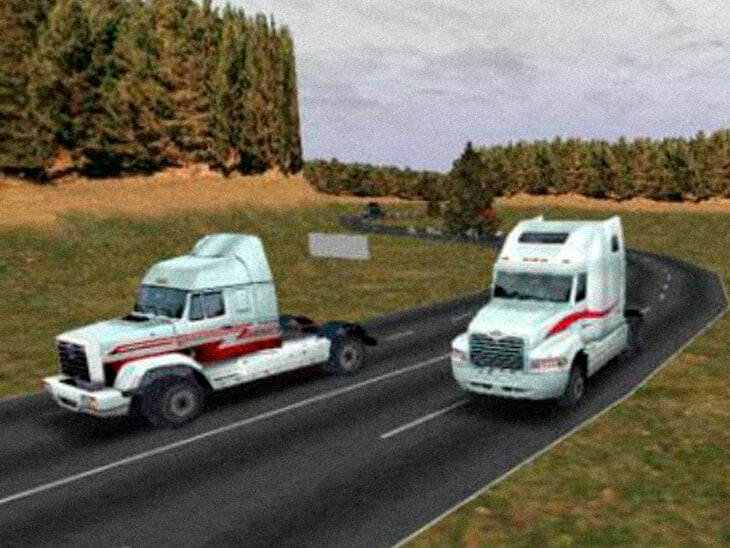 In “Truckers” not only the economy is well developed. Cars really feel like multi-ton monsters. The main reason is interaction with the road surface. This on the highway you can drive for a hundred, overtaking slow sedans, but in fields, wastelands and swamps it will not work. The truck can skid, slow down and even get stuck. And in general, you can drown a car with a load, losing them forever. 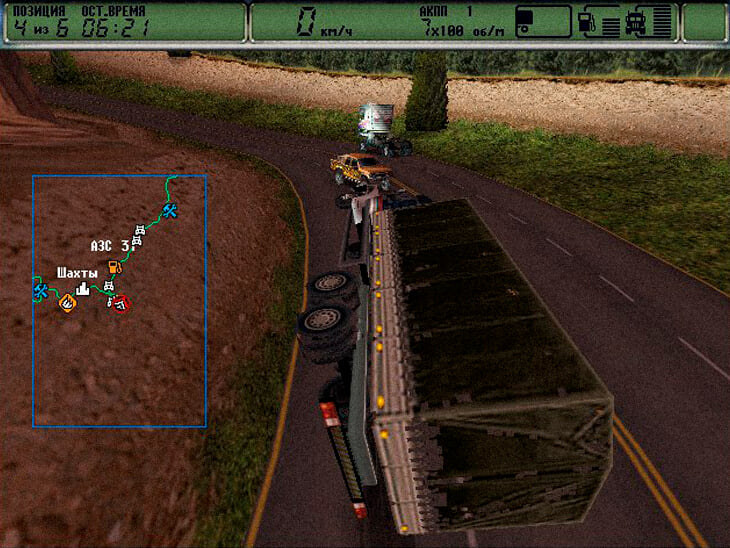 You can also lose cargo in other ways – to roll over on a sharp turn or crash into a reinforced concrete bush (bushes and small trees were allowed to be demolished only after patches). Different cargo has different fragility indicators, which must be taken into account. In special cases, even sharp braking can damage it – can you imagine how sad it is to lose money because of this?

The developers understood that looking at the scenery passing by was the main entertainment of the trucker, so it was very important to make an interesting environment. Standard fields and forests are decorated with buildings: an old church near the road or a forester’s hut, within a kilometer radius of which there is no primer. A huge wasteland in a quarter of the map is not at all wasteland. Dozens of small lakes, difficult terrain and a lost village far from civilization are picturesque. 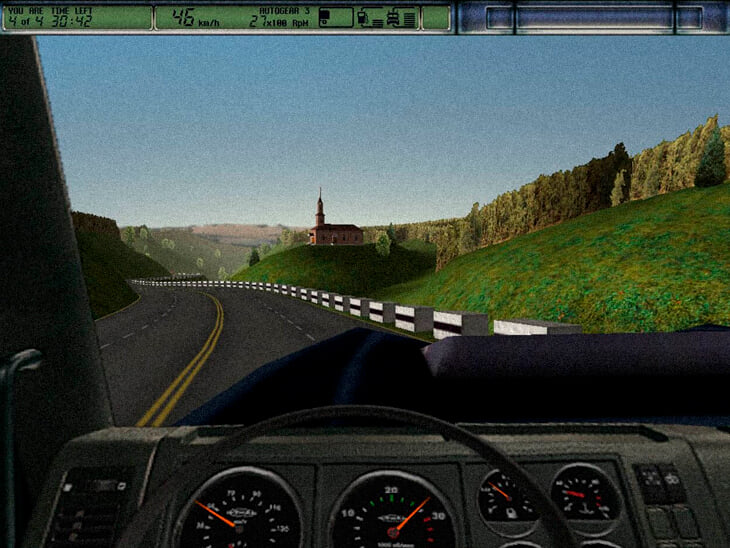 There are 11 settlements on the “Truckers-2” map. They are similar only in the presence of trading bases, everything else is different: from the range of goods to the location of buildings and their appearance. The names of the towns, buildings, surroundings and the general mood of the game elegantly convey the atmosphere of the post-Soviet backwater. Here time stopped in the second half of the eighties, and radio is the main source of information about the world around us.

On the soundtrack – “Aria” (albeit without Kipelov). But you can put your own songs

What’s a trip without music? Especially for the game, several classic tracks were re-recorded by “Aria”. There is no powerful vocals by Kipelov, but the recording is of better quality than initially.

Well, you can always find a folder with music in the game directory and upload your favorite tracks in mp3 there.

But in general I do not recommend throwing anything in there except “Aria”. The developers did not put it in the background for nothing. This is another sign of how carefully SoftLab-Nsk approached the game’s details. It’s the details that bring the world of Truckers 2 to life – even 19 years later.