Victory at the 1956 Olympics. How the USSR national team finally became one of the best

By AllHockey.Ru within headings “Our history” recalls the first Olympic success of the Soviet team, which happened 64 years ago. 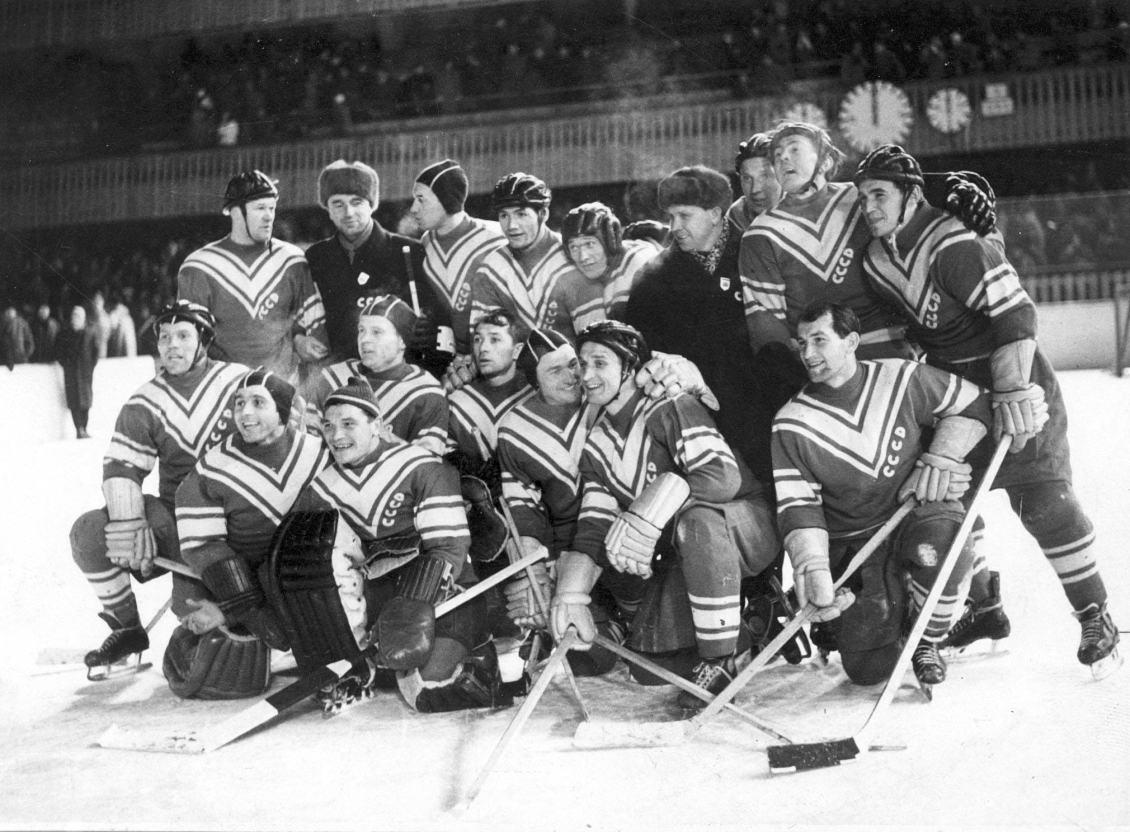 Tour of Europe and victory in the Achern Cup

The 1954 and 1955 World Championships, in which the Soviet team won gold and silver, showed that another serious force has appeared in the hockey world, which must be treated with all respect. And the 1956 Olympic tournament in Cortina’d Ampezzo, Italy, was to become the most serious test of its capabilities for the USSR team. In addition to the squad, led by Arkady Chernyshev, among the candidates for gold medals that year were teams from Austria, Italy, Canada, Poland, USA, Germany (JCG), Switzerland, Sweden and Czechoslovakia.

1956 was generally a year of major changes, not only in sports, but also in public life. An anti-Soviet uprising thundered in Hungary, Malta expressed a desire to integrate with Great Britain, and in the Soviet Union Nikita Khrushchev, who was one of Stalin’s closest associates, made a presentation on exposing the leader’s personality cult. Major changes have come in hockey as well. The USSR national team took part in the Winter Olympics for the first time. The successful performances of our team at the two previous planetary forums proved to the Soviet sports leaders that it can compete for victory in the main competition of the four years. The results were not long in coming.

Before the Olympics, in November-December 1955, our compatriots played a number of friendly matches. In Great Britain, the Soviet Union won three matches against the Canadian professional teams Harringay Racers (11: 1 and 5: 4) and Wembley Lions (3: 2). Then our team moved to Paris, where they defeated the English “Brighton Tigers”, which at that time was considered the national team of European Canadians, with a score of 2: 0. After that, Chernyshev’s wards went to Stockholm to play in the Achern Cup together with the “racers” from Harringay and the Swedish national team. Our recent rivals in London were defeated with a score of 9: 2, but we lost to the Swedes (2: 3). Nevertheless, our team was able to win the trophy thanks to the best difference between goals scored and goals conceded. Thus, the team of the Soviet Union was able to test its strength before the first Olympics in its history.

As two years earlier, when forming the team’s squad, our coaches Arkady Chernyshev and Vladimir Egorov relied on the players of the “army” club from Moscow, which at that time was called CDSA. He was represented by goalkeepers Nikolai Puchkov and Grigory Mkrtychan, defenders Ivan Tregubov, Nikolai Sologubov, Henrikh Sidorenkov and Dmitry Ukolov, as well as forwards Vsevolod Bobrov, Viktor Shuvalov, Yevgeny Babich and Yuri Pantyukhov. From Moscow “Dynamo” to the national team came the troika Valentin Kuzin – Alexander Uvarov – Yuri Krylov and forward Viktor Nikiforov. “Wings of the Soviets” gave the team a defender Alfred Kuchevsky and Alexey Guryshev and Nikolay Khlystov, who played in the attack.

Revenge from the Canadians was taken!

The system for the Olympic tournament was as follows. Ten national teams were divided into three subgroups (four teams played in subgroup A). The two best teams from each subgroup advanced to the next round, where they identified the best among themselves, playing each against each. The other four teams were forced to play in the tournament for 7-10 places, which was also held in a round robin system. Arkady Chernyshev’s wards began the competition with devastating victories over the Swedes and the Swiss. “Tre Kronur” were replayed with a score of 5: 1, and the envoys of the country of banks, cheese and chocolate conceded ten goals from our team at once, responding to this with only three goals.

Having naturally won first place in its subgroup, the USSR national team made it to the final round without any problems, where it had to fight for victory with the Americans, Canadians, Germans, Swedes and Czechoslovakians. Having warmed up on the national teams of Sweden and Germany (4: 1 and 8: 0), our squad beat Czechoslovakia with a score of 7: 4 in a rather tense match. Having scored the maximum possible six points, Chernyshev’s wards approached two decisive matches of the entire tournament with the USA and Canada.

The Americans were beaten with outward lightness and ease. But, in fact, the decisive advantage was achieved only at the end of the third period. In the 34th minute Nikolay Khlystov opened the scoring. It was possible to finally break the opponent’s resistance just before the finish line, when Vsevolod Bobrov, Yuri Pantyukhov and Valentin Kuzin scored another goal, defended by Willard Aikola, who was later recognized as the best goalkeeper of the tournament.

In the last game the national team of the Soviet Union had to meet with the Canadians, who brought their best amateur team of the time, Kitchener-Waterloo Dutchman, to Cortina’d Ampezzo. Let us remind you that it was the “maple leaves” that beat Chernyshev’s team in the World Cup final a year earlier. The pioneers of hockey, unlike us, lost one match in Cortina’d Ampezzo – they had to lose to their southern neighbors from the USA team with a score of 1: 4. And the Americans, in turn, could not do anything with our team. Therefore, the Soviet Union national team was satisfied with any outcome in which it would not lose this meeting. The Canadians were a very serious force and, as Anatoly Tarasov later recalled, it was dangerous to get involved with them in an open battle. Therefore, our coaching staff changed their tactics, focusing on pressure. Thus, the USSR team made its opponent to make mistakes, which led to two unanswered goals in his goal. Dynamo players Valentin Kuzin and Yuri Krylov became their authors. The 2-0 victory gave the Soviet team its first ever Olympic gold medal. Subsequently, the USSR / Russia team will become the first in the hockey tournament eight times. But the very first success achieved 64 years ago will always be considered special. It was from this moment that the Soviet Union finally entered the pantheon of the strongest hockey powers.