Good morning everyone (afternoon, evening), today starts the third day of OGA DOTA PIT EU / CIS, 4 bo3 series await us, I hope today we will see many interesting matches. Like yesterday, the news in live mode will gradually be filled with materials about meetings, picks and final tables on the cards. We start with the lower bracket – an interesting confrontation between VP.P and OG.

It is difficult to see specific respect bans in bans, except that Topson was asked not to play Invoker. VP.P pick is just a summary of dotabuff for the first two days, especially in terms of hero winrate, and in general, all pick heroes look strong in the patch. OG was pulled from the top of the shelf with a whisp-carry that seemed to be dumped by Valve with their patches after TI9. Interesting pick for mid, but Topson is used to surprising us in second position. Let’s see if OG brings Wisp back to the first. 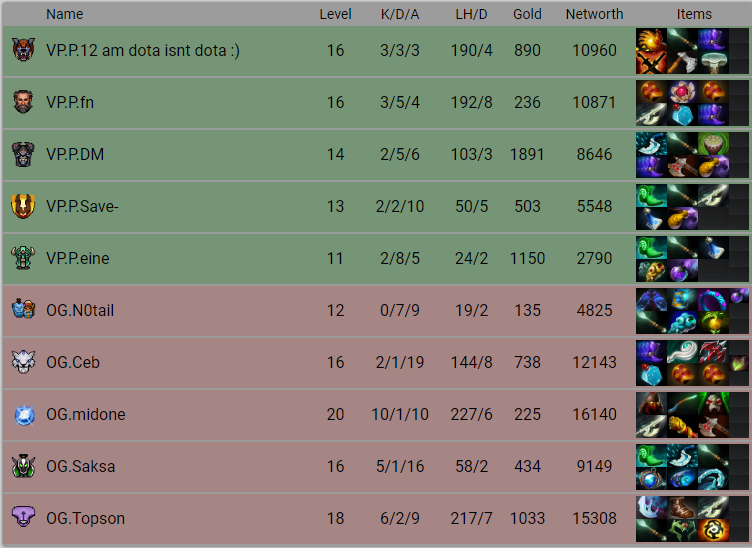 At first it seemed that the powerful VP.P pick was about to start overtaking the opponent, but if you remember Wisp from OG at the last TI, then the pick there needed some farming, after which Wisp with aghanim tore the whole map. Now Wisp is already without aghanim, in this game MidOne went through a dominator and a halberd (a dangerous build, considering that Doom can eat a creep from a dominator). Until 18 minutes OG were not very expressive, and VP.P openly let them breathe on the map. And on the 18th minute, a key fight took place, after which OG spun their whirlwind of endless fights and pressure on all lines. VP.P was never able to properly fight with the whole team with all the buttons. The first for OG.

They decided to remove Wispa in the first stage, they did not forget about the respect bans of Magnus and Invoker. nominally, OG’s pick is similar to the normal one (if we already assume that entering mid is the norm), where Furion will go to Hard, VK will have a carry on the safe lane. VP.P has a very tempo pick, able to fight from the very beginning of the game. Obviously, by closing the Venomancers peak, they want to find a line for him against VK. Doom in mid is another strong feature of the patch, especially against Void. If VP.P fails to pick up the pace, they have little chances. 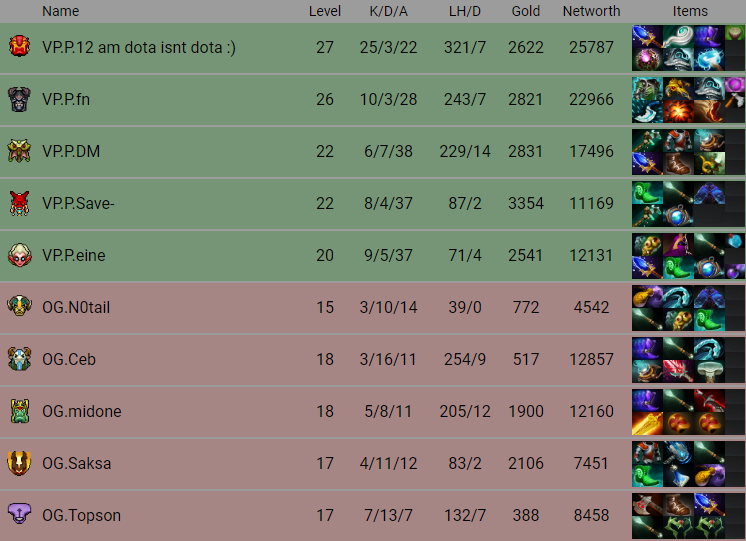 Venomancer was really looking for a line against VK, for this they even had to send him to the light line of the forces of light. Davbla with Venomancer confidently stands against the double with VK, it’s strange that the opponents decided not to swap lanes for their carry. The lanes, in general, VP.P stood up better – the thought strained the whole map, expelling Void from the mid, and on the 15th minute a key fight 5-2 took place in favor of the forces of light, after which the chart went only in one direction – up, in some moment reaching colossal values. OG tried to play to the end with their good late heroes, but 40k outfarm is very difficult to beat. Especially with the aghanim on the Void. Our team compares the score in the series.

VP.P bans Wisp and Magnus again, OG immediately takes Doom and Invoker to the first picks. Zombies survived to the last peak, which is amazing. VP.P bets on PL’s last pick, where EpilepticKid rarely loses. OG’s peak looks more confident, if VP.P is not surprised, then there should be no problems. 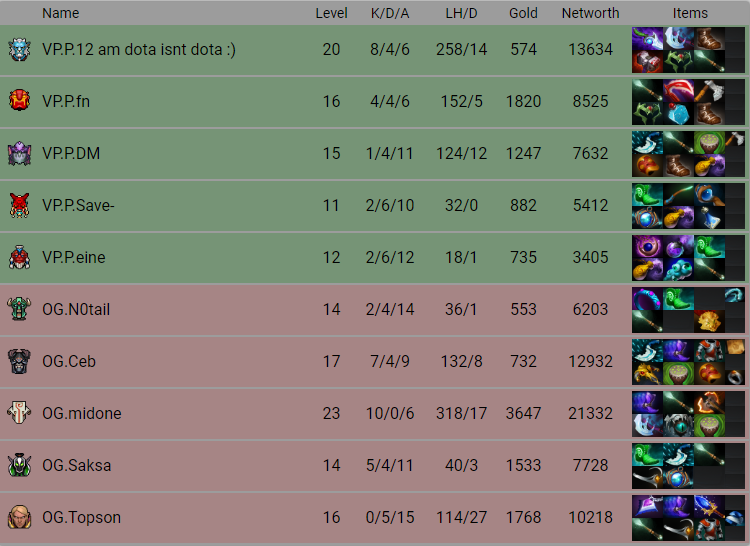 It looks like VP.P became hostages of their faith in PL – at some point the whole game came down to spaceship EpilepticKid, while the entire five of the enemy was straining the entire map. OG took the most “normal” pick and easily implemented it. Apparently, when they pass the grid, they are ready to step on the throat of their own song and not experiment on the air. In the evening they play with the winner of the next pair: FTM – NaVI.

The favorites, as for me, are FTM. On the first two days, they look like a strong team that can compete for prizes, if they don’t freak out at certain moments on the map. NaVi has a restructuring and so far they seem to be more of a weak team than a team capable of surprising. But this is a CIS dota, it is dangerous to bet against NaVi here (as well as them, by the way).

The teams exchanged strong bans – Trent and Doom, which NaVi played confidently on the first day, Phoenix, who is constantly in auto-pick at FTM. NaVi’s pick is about the same as we saw yesterday – Oracle + Earth for the calipers, Timber for 9Pasha, the only thing that stands out is the sudden Invoker for Young.G – but he is not a well-known player yet, so there is not much information about his pool … FTM from default has only top lane with Pango + Rubik. V-Tune was sent to the easy one on Drovka with AWF on Wenge – a potentially very strong lane + Drow is good in playing against Invoker and Lifestiller. Let’s see if NaVi can show something. 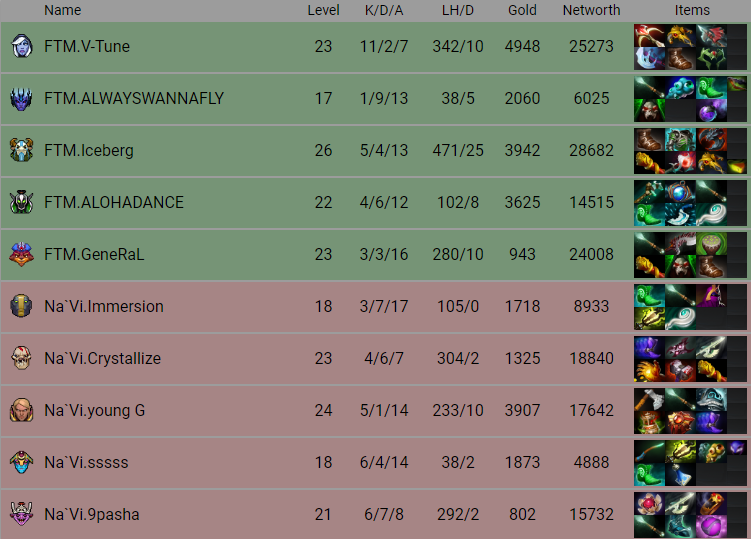 Oh, this CIS Dota, friends! Yesterday I noticed that NaVi has weak laning now and FTM showed it the same way as Alliance yesterday. All lines were confidently won, I would even say overfarm. The score was equal throughout the game, but FTM just outfarm the opponent, after the 20th minute it seemed that FTM was just too lazy to finish – NaVi just sat on the base. But how not to make yourself a hardmod? And now FTM twice give up three heroes and have lost half of their advantage. It seemed that NaVi would still come back, but FTM still had the skill to implement a stronger pick – the first map for FTM, but you need to be careful – it is not always possible to fix such errors.

The bans have not changed much, NaVi only banned Rubik instead of Clockwork. NaVi again open from two supports, apparently this is some kind of draft chip (which I don’t really welcome). For General, take Brumaster, on which he almost pulled a card in solo yesterday. FTM again take very strong lanes, the life stealer is good against Nyx, Kva and Venomancer, but NaVi has a good Juggernaut that can kill enemy cows. NaVi has a better pick than the first one, but if there is a weak laning again, there will be nothing to catch in the game. 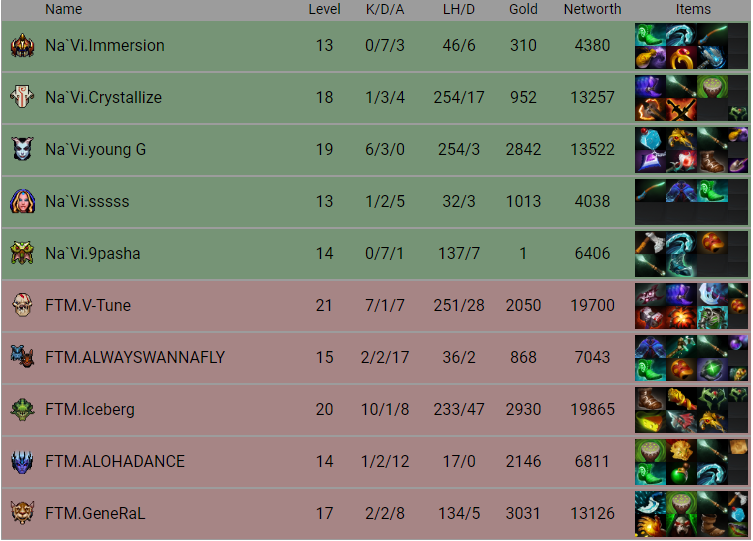 Before the start of the next league, NaVi’s homework is to make an acceptable lane (what is the gap – I don’t know, maybe picks, maybe the players’ actions). Already too lazy to paint the same thing for the fourth time – the lines are lost, the opponent got an advantage, etc. … Unlike the previous map, FTM did not score and confidently went to the next round of the lower bracket. There they are already waiting for OG.

Now we are waiting for the final of the upper bracket: Nigma – Alliance

Wisp often goes through the first stage of bans and teams like Nigma do not miss the opportunity to take him. Strong drafts – Wisp + Batrider for GH and W33, Slark and Zombies for Nikobaby and FNG. The second phase of the peaks is more confident for Nigma – Antimung and Beastmaster of the collective signature. Incomprehensible Magnus on the last pick for S4 – apparently, they plan to send him to the easy lane, he is not worth it against the Anti-Mage. In my opinion, the draft (especially on the lanes) for Nigma, let’s see what happens in the game. 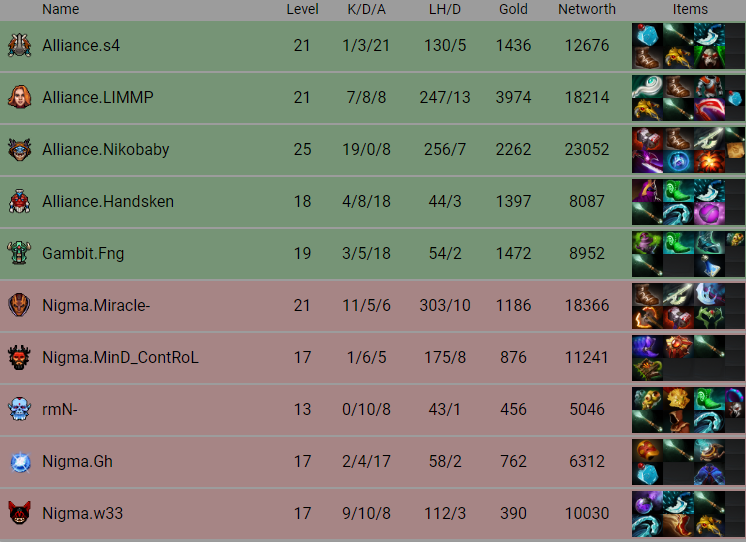 A very curious game – Nigma stood up to the lanes very well, got a solid lead up to 15 minutes – about 6k. W33 on Batrider simply carried Lina out of the mid lane, Anti-Mage on Wisp has an attack speed of 0.48 at 11 minutes! What NaVi could not do was Alliance, they were able to hold a couple of protracted fights, which are very beneficial for Slark – he fills up the stacks and becomes stronger and stronger every second if he is not killed quickly. After that, Nigma tried to go out in smoky, but simply the tsarist counter-initiation from S4 left no chance of winning. Respect, the first card for Alliance, we are waiting for the second one.

The first bans show which heroes the teams are afraid of, it’s strange that Alliance does not ban Batryder, but, apparently, they are ready to play against him. Nigma, obviously, relies on strong lanes and teamfight for SK, Specter and Warlock (maybe Rubik also pulls up the wall or exorcism), but we have already seen how in the last game in midgame Alliance has to stretch the drag and correctly counter. 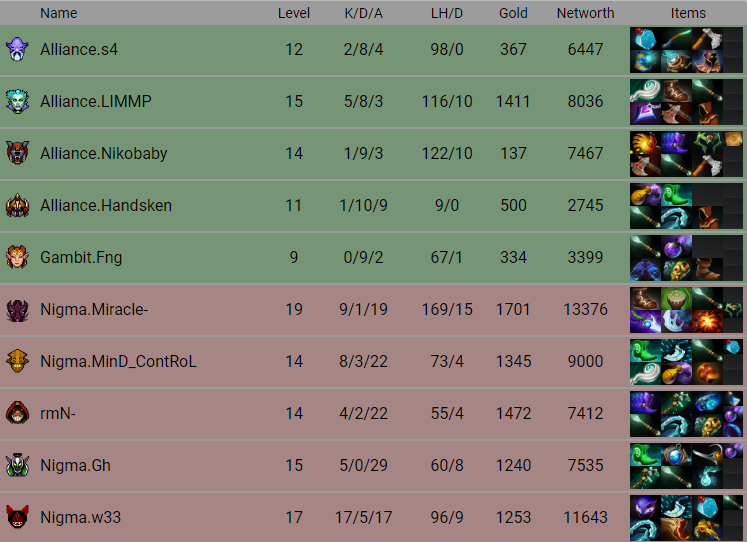 There were no surprises on this map – Nigma’s lane advantage was quickly turned into a won card. To be honest, I was even taken aback by how easily the lines were won – usually the SC on the last peak is not perceived as something very strong, but here MC played very well, and Batrider should fly to the ban on the next map – W33 on it is simply incomparable yet.

Batrider is sent to a well-deserved ban, but this opens up the Gyro + Wisp bundle for Nigma, which they immediately pick up in the first stage, sending Doom and Zombies to the ban. Slark for Nokobaby is taken in the first phase, they don’t want to be banned. After the peak of Necrophos, Alliance responds with AA, which is very good against him (against Wisp, too, but it’s more difficult to hit), now I don’t want to put Necrophos in the mid, so they get Void Spirit for W33, the Legion draft is closed, for which there are Phoenix and AA. Good picks for both teams, the drop is still represented by Gyro near Wisp, whom we almost saw yesterday (and would have seen if BOOM had not turned off the light). We look. 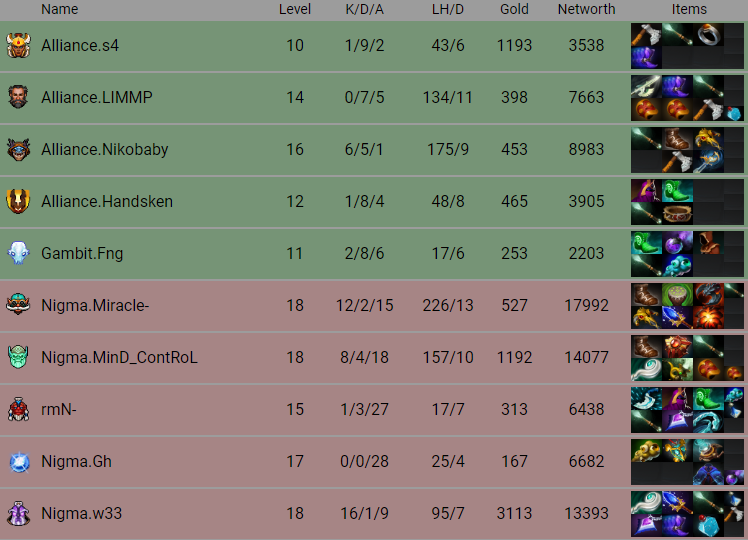 Nigma’s rivals in the grand final will not be envied – only two bans, and the heroes need to be banned at least 4-5. It is difficult to analyze the map where all the lines were won – W33 in some incredible form, MindControl burns with napalm, GH all over the map at the same time, Miracle … just Miracle. Rmn- does not spoil the picture at all. Nigma will be the favorite in the final against any opponent in this tournament. Alliance lost the lanes on all maps (especially mid), but they were able to comeback only on the first. There is something to think about.

last match of the day ahead: OG – FlyToMoon

Wisp and Magnus banned from FTM, Phoenix and Rubik from OG. In general, the draft is more confident in the latter, taking into account who will execute.

Sorry, there will not be much text further, I will try to finish it later. (but there will be drafts and statistics) 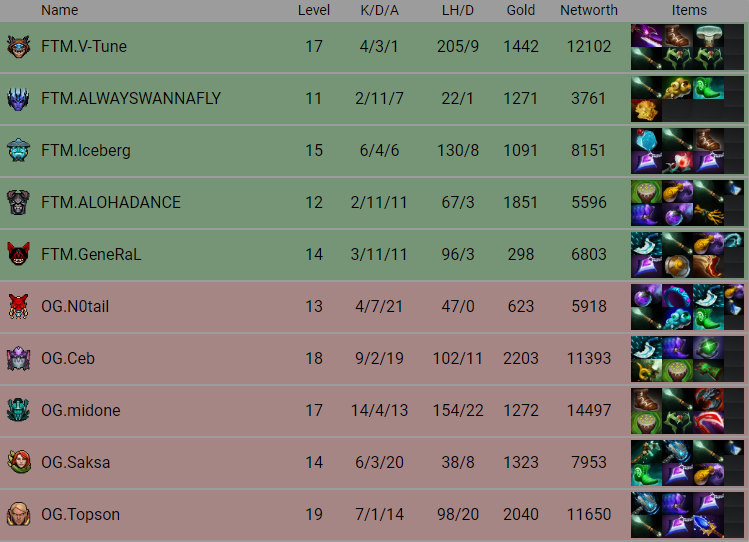 OG win, but FTM came out as best they could, very cool card! 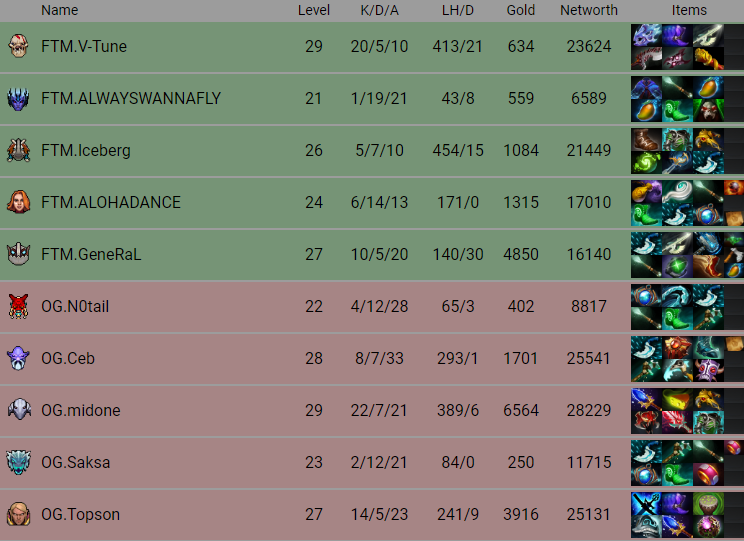 The day is over, see you tomorrow. Unfortunately, there are no CIS teams left at the tournament.

Ibra is the ruler of Milan. First player with 50+ goals for Inter and Milan in Serie A – On the zeitgeist – Blogs

Krasava was hooked by the girl-coach of Brest. And he can be understood – Girl of the day – Blogs