The March quarterfinal battle with CSKA was triumphant for Spartak, but it drained the team before the semi-final against Zenit. In St. Petersburg Tedesco cannot count on Poncenor on Zobnina – Argentine striker earned a red card for a foul on Karpov (later everyone figured out that the boy was simulating – but it was no longer possible to change anything), and the Russian midfielder in emotional overtime immediately after the winning goal flew hard into Oblyakova and received a warning, which became his second in the tournament.

Zobnin’s absence looks especially painful for Spartak now, when we saw how Roman played the last match against Akhmat. He was absolutely the best on the field, showed outstanding movement, made almost no mistakes in passes (47 accurate passes out of 49 total according to Wyscout data), tried to sharpen and came to the fore in difficult times, scoring an atypical stunning long-range goal for himself. In “Spartak” there is no second midfielder with such a volume of intensive movement with the ball and without it – even Kral is still below this level.

Ponce’s disqualification is also a blow. The Argentine forward is the most balanced among all the Spartak strikers. On the one hand, he fights a lot and plays in a quickdraw, on the other, he runs well – therefore he can be useful both in positional football and in counter-attacking. Now Tedesco has only two forwards left – Sobolev Yes Larsson… There are other options (Mirzov and Bakaev also sometimes play in front), but they are definitely not optimal.

Guliev exiled to Spartak-2, so the initial data is simple: Tedesco has only two players for the vacant position in the center of the field, Umyarov and Thiel… The first was treated after an injury in Sochi and did not play in the last round. The second, on the contrary, was a good substitute in the match against Akhmat and scored the third goal. It would seem, what is there to think about here at all – since the Dutch 18-millionth midfielder is on an emotional upsurge, then should he play?

Not. Thiel is still not integrated into Spartak’s system, he does not fully understand what to do in the eight position at 3-5-2, all his benefit for such a structure is limited only by the zone near someone else’s penalty area. For working in depth, he has no qualities: neither quick play, nor a stable ability to turn around with the ball. Goal to “Akhmatu” does not mean anything yet: the opponent began to leave huge zones, where Till ran with pleasure.

Umyarov fits into the structure much more harmoniously. If he recovered (judging by the photos, he worked in the general group), then it was Nail who should go out from the first minutes and take a place in the support zone. Umyarov will not become a full-fledged replacement for Zobnin, since he will not be able to provide the same amount of movement with the ball, but he has a good effect on the game from the depth due to openings and quick passes. In this case Kral, as in previous matches, will get more freedom in forward connections – and at least partially make up for Zobnin’s absence. And Umyarov is better than Thiel in terms of the implementation of standards.

The only caveat: the last time Nail played well in October-November, in the summer he is very unstable. However, the minimum number of alternatives makes us close our eyes to this.

In my opinion, this is a more pressing question compared to what was asked in the last paragraph. Bakaev in the summer, he also plays poorly: a huge number of errors in passes, including in aggravating actions, because of which the team loses dangerous approaches and rushes back five or seven times in a half with the entire squad. In addition, Zelimkhan behaves in an undisciplined manner during positional defense and often loses concentration, which is why the scheme collapses.

Thiel is able to add in the percentage of saved goals and play better in the defense structure, but he will not be able to provide the same quick access to the attack after a change of possession, in addition, he has much less subtlety in sharpening actions. If Bakaev can theoretically wake up, then the Dutch footballer has a stable lack of these skills.

Therefore, despite Bakaev’s terrible form, I would still choose him. And Til would have immediately released as a substitute if he saw that Zelimkhan again hurts the team, and does not help. 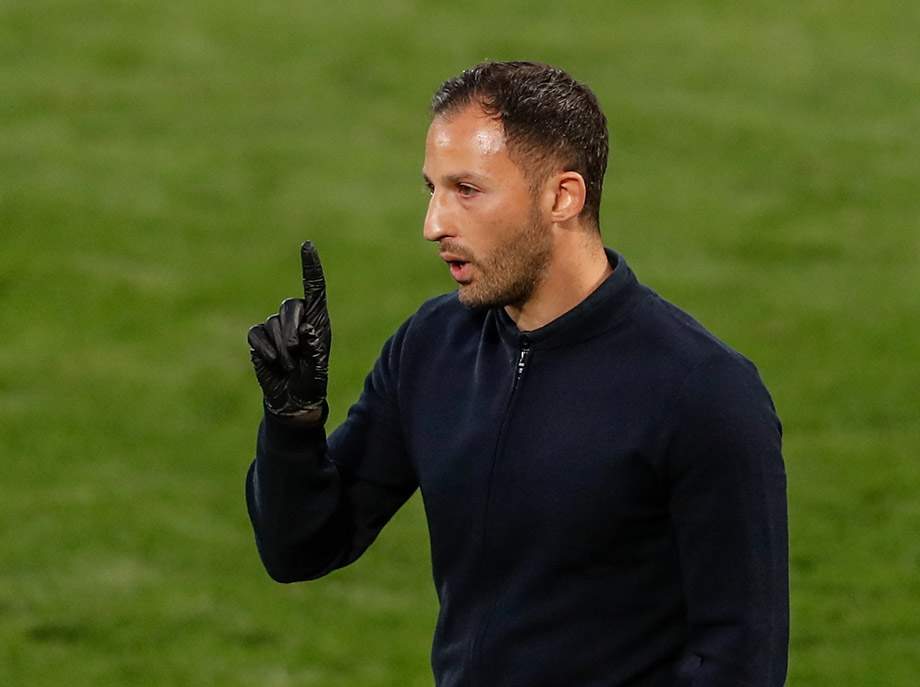 What other options are there for the support zone?

If Umyarov (the first option for the “six” position) did not recover, then Tedesco has only one option – translation here Gigot… Previously, the French center-back became a defensive midfielder on a situational basis in games with Pakhtakor in February, Krasnodar in March and Tambov in July. True, the last case concerned only positional attacks – in the defense phase, Gigot sank back to the center of defense.

Samuel has the power, efficiency and energy, he moves the ball efficiently and knows how to run forward with it on power dribbling (as, for example, before the second goal in the game against Akhmat). Only in the center of defense it is also necessary in St. Petersburg, given that Zenit has two tall and jumping forwards at once, often responding to feeds.

Kutepov have not played for a long time, but release together with Jikia Maslova and Gaponova – a huge risk. The same Maslov is still very much mistaken positionally and looks like the weakest link among all the central defenders.

Stories or Maslov on the right flank?

The variant with Maslov on the right was tested in the last round against Akhmat. The impressions are twofold: Pavel worked tolerably in defense, but in attack he showed himself very gray, the number of his turns was much more modest compared to Rasskazov…

Therefore, despite Rasskazov’s bad match against Sochi, I would still bet on him. Otherwise, the right flank may completely turn off, because Zobnin, who often worked in this zone, also fell out.

In the previous match against Zenit in late autumn, Tedesco, with the score 0: 1, abandoned 3-5-2 during the break and rebuilt to 4-2-3-1. The transition did not have a positive impact on the game of the red-white – playing almost halfway in the majority, they did not create a single dangerous moment. A week later, Tedesco tried again 4-2-3-1 against Rostov (already from the first minutes), it turned out to be catastrophically unsuccessful – and since then the main formation of Spartak has remained unchanged.

I will be very surprised if Domenico cheats on himself in St. Petersburg. Even if there is an ideal model for “Zenith”, then just know little about it, it is also important to have time to work out. And Spartak didn’t really have time to hone the nuances, the schedule was too harsh. When you are not exercising, but recovering and flying, it is much more logical to bet on the stability of a system that is functioning well. Whereas a global change of formation may not hit Zenit, but Spartak.

Although Tedesco has enough headache without thinking about schemes. Making the right point decisions with terrible resource constraints is also a very difficult task. And not the fact that they will help.

Russian PS Plus subscribers in August will be given a collection of mini-games instead of Call of Duty. Substitution was not rated – Notes by Pogorskiy – Blogs